Are you looking to make money by launching your own digital product through ClickBank? 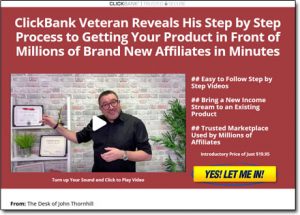 Have you come across John Thornhill’s CB Superstar ClickBank course which promises to provide you with the “secret ingredients” for achieving a successful launch & getting your product in front of millions of affiliates?

And are you now wondering if the course really holds true to its word & if it can really help you achieve the levels of success it claims it can?

Well I’ve got good news for you because in this honest CB Superstar review I’m going to be uncovering the real truth about John’s ClickBank course as well as outlining the important “hidden details” that he fails to tell you on his sales page.

What Is ClickBank Superstar?

ClickBank Superstar is John Thornhill’s latest product & it has essentially been put out to show people how to leverage ClickBank to successfully sell digital products & have them eyeballed by millions of potential affiliates.

So as a member of ClickBank Superstar you’re led to believe that you’ll be getting access to a bunch of step-by-step videos which walk you through the process of listing your product on ClickBank & beginning to generate sales in the shortest time possible.

But on top of that John offers some extra tips in the course as well, covering things like how to get the most from ClickBank using coupons & how to make sure your sales pages are actually compliant from a legal point of view.

It all sounds fair & well, and it “kind of” is… But there is a bit of a problem…

I mean don’t get me wrong, if you’re looking to list a product on ClickBank then you do get some relatively decent training on doing that in return for your $19.95… However I’m not going to lie, if you just spend a bit of time searching on Google you can quite easily find the information elsewhere for free.

But if you’re willing to pay for the privilege of things being laid out for you step-by-step then maybe you’ll find value in it for $19.95.

As you can see though from the screenshot of his CB Superstar sales funnel below (which he displays to affiliates who may be interested in promoting it) the CB Superstar is really just an “entry” product to get you through the door: 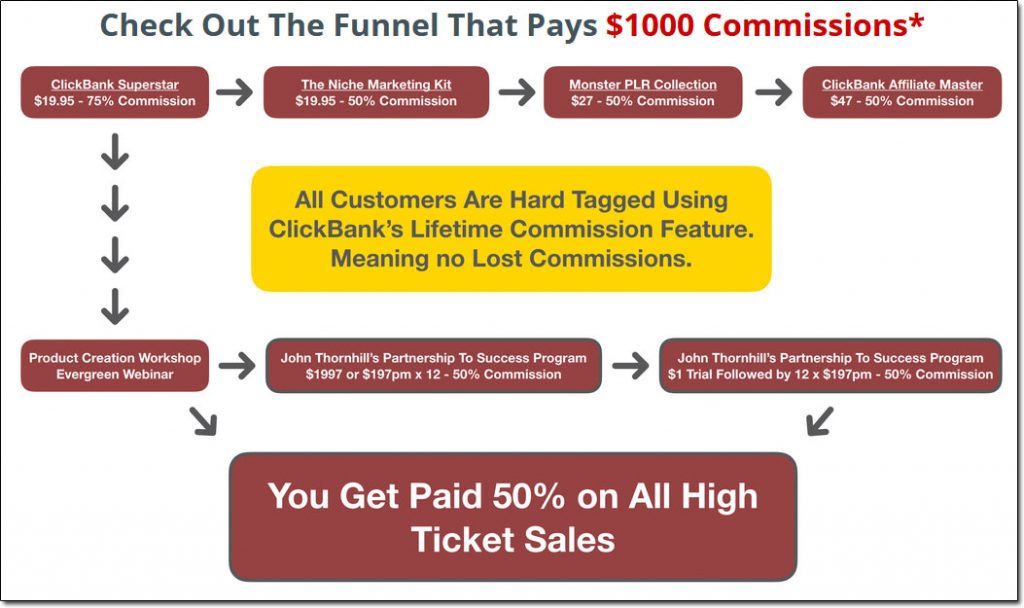 What I mean by that is that the CB Superstar program is like the bait on the end of John’s hook – it’s a teaser to get you interested, and then once inside you’ll be hit with various upsells for several different programs.

And as you can see from the screenshot above he is offering to pay affiliates $1,000 commissions, so at the rate of 50% which he is also claiming that would mean the entire thing would see you spending $2,000+.

That’s a lot of money, and whilst there is indeed value in John’s courses it’s just disappointing these costs weren’t made clearer upfront. If there’s one thing I really dislike it’s upsells that you only get to discover after spending money.

Will ClickBank Superstar Really Help You?

Well realistically like I mentioned in the previous section of this review, the ClickBank Superstar program itself actually only teaches you how you can get your product listed on ClickBank, along with some basic general tips.

So if you’re only looking to spend the $19.95 & nothing more on the upsells, then you won’t really get a huge amount from the CB Superstar program.

But ultimately like I also mentioned earlier, if you just run a few Google searches you can quite easily find that stuff available elsewhere online for free… So essentially you’re just paying the $19.95 for the privilege of John laying everything out for you step-by-step.

I mean that’s not a bad thing, I’m sure there’s plenty of people out there (maybe you) who’d be happy paying a small sum of money like that in return for having things laid out in an easy manner…

But one thing you should be aware of is that the upsells inside of CB Superstar are 1-click-billed too, meaning if you do only want to spend the $19.95 then you should be VERY careful as to what buttons you click.

One wrong click and boom – billed for more money that you didn’t want to spend.

With regards to it helping you though – if you’re looking to list a product on ClickBank then yes, it’ll help you to do that… But if you’re expecting to just spend the $19.95 and find some sort of secret that’ll skyrocket your income then sadly you’ll likely find yourself disappointed.

And that brings me onto the next point…

What If You Don’t Have a Product?

If you don’t have a product already, then the CB Superstar program itself won’t really help you – since all it does is show you how to list products etc, it doesn’t actually show you how to create one.

What it does do though is give you access to a webinar called the Product Creation Workshop which is basically a sales page for one of John’s other products named John Thornhill’s Partnership To Success Program… And it’s in this program you’ll learn how to create a product.

However with that being said, his Partnership To Success Program isn’t cheap – it costs $1,997 or 12 monthly payments of $197.

So if you’re contemplating buying the CB Superstar program but don’t have a product of your own yet, then you should be aware that you’ll need to spend at least $19.95 + $1,997 to get any use out of it.

Otherwise if you only spend the $19.95 you’ll just be shown how to list a product you don’t have…

The True Cost of ClickBank Superstar

Admittedly the ClickBank Superstar program itself is $19.95 as advertised, however like I mentioned towards the beginning of this CB Superstar review that is basically just the bait on the end of John’s hook…

There are several more upsells/alternative programs inside that will be pushed on you which include:

So in total if you were to purchase everything you were offered then the true cost of the program would equate to $2,110.90… Or $2,447.90 if you were to opt for the monthly payments on his Partnership To Success Program.

Is ClickBank Superstar a Scam?

The short answer to that is no, it’s not… It’s a legitimate training program, however sadly it is one that follows the typical approach of many other ClickBank products which is to get you in with a “hook” & then hit you with lots of expensive upsells on the inside.

If all of those costs that I mentioned in the previous section of this review had been made clear right from the off (prior to taking your $19.95) then I could be saying very different things about the CB Superstar program right now, however as it is there is no way I be recommending it due to the fact that I believe it to be pretty misleading.

So yeah, it may not be a scam – but at the same time it is not necessarily the most honest program I have ever came across either.

Don’t get me wrong though, the CB Superstar program is definitely better than many of the other ClickBank products I’ve come across (which are mainly just flat-out scams). At least John has gone to the effort to give you some good training on the inside.

Sadly it’s just the hidden pricing that really lets it down.

Well the quality of the program itself is better than most of the ClickBank products I’ve come across, however the actual value inside of the CB Superstar program itself is pretty minimal, that’s why it’s only $19.95.

The reality is that the CB Superstar program is primarily being used as a way for John to then promote his other courses, so overall if you do buy into CB Superstar & decide you want access to everything inside then you could find yourself spending well in excess of $2,000.

For those reasons I am going to say that whilst the CB Superstar is “OK”, that’s all it is… And truthfully you can actually find most of the information elsewhere online for free.

Couple that with the fact that the true costs are hidden & it’s safe to say that I won’t be recommending this program to you because you could find yourself spending ridiculous amounts of money unnecessarily.

Yes John may know his stuff when it comes to ClickBank, but in my opinion it seems that he’s launched his new CB Superstar program with the main intention of making himself wealthy, not you.

I mean sure it might help you a little bit, but I think the cost to value ratio is just too far off on this one… Maybe if it was cheaper it would be a different story, but at $2,000+ I simply can’t recommend it.