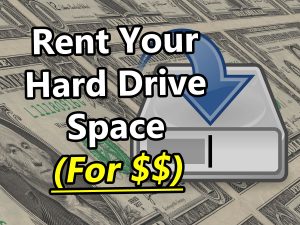 There are many ways that you can make money online, but one of the most recent methods I’ve discovered is to make money by renting your unused hard space (and it’s something that pretty much anybody can do).

All you need is a hard drive with some unused space (obviously), and a relatively good internet connection.

As long as you’ve got those 2 things you’ll be able to see yourself earning money from this method & the best part is that once it’s set up you don’t actually need to do anything… Other than to leave your device switched on, of course.

So if you’re interested in learning how to make money by renting your unused hard drive space then keep on reading for everything you need to know (including details of how much you can actually earn by doing it).

How Does Renting Your Hard Drive For Money Work?

The process of renting your unused hard drive space & making money from it is actually pretty simple, thanks to a relatively new startup named Storj (pronounced “storage”).

All you need to do is download their free app, install it & then select the amount of unused hard drive space that you’d like to offer out for rent.

Once you do that & activate it, the unused hard drive space that you’ve allocated will essentially become part of their cloud storage network & will begin getting used for the storage of files.

All you need to do is simply leave the hard drive switched on & connected to the internet, then Storj will pay you each month in return for allowing them to use your drive.

It’s a pretty cool idea, to say the least.

Their goal is to essentially build a decentralized cloud storage space (kind of like the Bitcoin of data storing) to prevent the data from being monitored or censored.

Plus, because of the way data is stored across devices they also hope that it’ll completely protect the network from the threat of downtime.

And since its launch Storj has actually attracted a lot of attention & gained a huge amount of attention, so I could certainly see it rivalling the likes of Dropbox, etc, in not too distant future.

After all, privacy is something that’s only becoming more & more sought after.

How Much Can You Earn By Renting Out Your Hard Drive?

Well, you’re not going to find yourself becoming rich by renting out your hard drive for money, but it could certainly provide you with a nice bit of extra pocket money each month.

And as I mentioned at the start of this blog post, once it’s set up you don’t really have to do anything other than leaving your drive switched on & connected to the internet.

Now, earnings will vary of course depending on how much storage you’re actually able to offer & what speeds your internet runs at, but here are some examples to give you an idea what you might be able to earn (which I produced by using Storj’s earnings estimator tool):

Estimated earnings: ~$5 per month (based on 15 months earnings)

Estimated earnings: ~$92 per month (based on 15 months earnings)

Estimated earnings are one thing, but real user reported earnings are another… So for that reason, I decided to do some research to find out how much people were “really” earning from Storj.

Here are some of my findings:

After 2 month payouts I earned about 10 STORJ which is about ~4$ at the moment. Like other said it’s a fun hobby but you won’t get rich.

If you already have a empty drive you own then yes, its definitely worth it, i have been farming for close to two years now and i made a ROI on my existing drive of 30x. Now this is no future guarantee, considering the price of STORJ moved from 2 cents to upwards of a dollar, but you won’t make a loss if you already own the drive.

Now, one important thing you’ve probably noticed from the above user comments is that Storj doesn’t pay directly in “cash”, instead Storj pays their members in STORJ, their own cryptocurrency.

This means that the amount you earn in actual dollar value is also dependant on how valuable the STORJ cryptocurrency is at the time you decide to make an exchange.

But the general consensus is that if you’re leaving the drives switched on & connected to the internet anyway, then Storj provides a good way to earn extra cash from the unused space.

If, however, you’re thinking about purchasing a drive purely to rent out or you’re thinking of leaving a drive switched on that isn’t usually switched then, then due to additional costs (electricity, etc), you may need to think harder about it to see if it’ll actually be worthwhile.

What Are The Requirements?

Well, obviously you need a hard drive with unused space & you need an internet connection, but since you’ve read this far down the post I think it’s pretty likely that you’ve got both of those.

So, onto the specifics…

Your hardware needs to meet the following requirements: 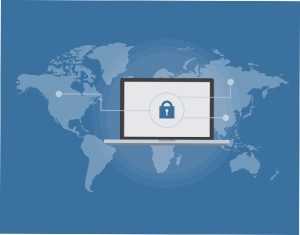 Storj claims that it is, and they use things like public/private key encryption and cryptographic hash functions for security.

But, would I really want to offer the unused storage space on my personal hard drive for rent?

The way I see is that Storj is great if you have a spare machine kicking about, for example, a machine that you use solely for something like gaming.

But if you’re thinking about using Storj on your “everyday” machine that you use for things like online banking & doing other personal things, then it’s probably not the best idea to run something like Storj.

I mean sure, it may be secure, but it’s quite clearly MORE secure to not have Storj. That’s my opinion.

Every additional you connection you allow to your device poses an additional security risk, regardless of how small or large that particular risk may be deemed to be.

The Pros & Cons of Renting Your Hard Drive For Money

The truth is that some people will really be able to benefit from renting out their unused hard drive space for money, but for others, it may not be the greatest option (and there may be better alternatives).

To help you decide, here are some pros & cons:

How To Make Money By Renting Your Unused Hard Drive Space

So you’ve decided you want to get started & try it out, huh?

The good news is that it’s not too difficult.

All you need to do is head on over to Storj, create an account & then download their free application to your device.

Once downloaded, simply install it & then configure how much of your unused hard drive space that you’d actually like to make available to share on the Storj network.

As soon as it’s configured & activated your disk space will be immediately placed on the Storj network & you’ll be able to begin accruing an income right away.

Your earnings can be tracked from within your Storj account & you’ll be paid out once per month in their own cryptocurrency which as I’ve already mentioned, is named STORJ.

From there it’s up to you as to whether you decide to hold onto the STORJ or decide to have it converted into USD for you to transfer to your bank & actually spend.

(or whatever currency you wish to convert it into, of course).

Either way, the process is relatively straight forward.

What If I Decide To Quit Storj?

This is the one thing that there seems to be little information on.

I ran a few searches which took me to the Storj support forum, and it seems that most people asking “how to leave Storj” just get answered with “why do you want to leave?”.

And it seems I’m not the only one struggling to find info on leaving Storj as this was the most recent post I discovered:

I want to know how to end storj node completely and cleanly. Please help me.

No matter how many times I search, I can’t find a way, so I ask here.

Digging further through the forum revealed that in order to leave Storj you need to do something called a “Graceful Exit”.

The problem, however, is that you need to have been using Storj for at least 6 months for this to work.

It appears that if you haven’t used it for at least 6 months then you can just shut it down, but the problem is that you apparently won’t be paid what they call your “held amount”.

So if you’re thinking about making money by renting your unused hard drive space then realistically you need to put some serious thought into it & determine if you’re going to stick with it.

If not, and you leave early, you could just find it was a waste of resources.

If you’re looking to earn a little bit of extra pocket money without doing anything, then admittedly renting out your unused hard drive space through Storj could be a pretty good option.

However, if you’re looking to earn more than pocket change then realistically, renting out hard drive space with Storj probably isn’t the best route to take.

Instead, I would suggest an alternative such as affiliate marketing.

I mean sure, affiliate marketing does indeed take work (unlike renting out your hard drive), but it’s my top-recommended method for earning extra money online.

As an affiliate you can find yourself getting paid by companies like Amazon in return for promoting their products or services & there’s absolutely no limit on the amount that you can earn.

So if you’re more interested in a method that could see you earning something larger than renting out your hard drive can, then I’d highly recommend you check out affiliate marketing.

I’ve even put together a free guide right here to help you get started.

But whatever you decide to do, I just hope that my post here has been insightful & helped you learn that yes, it’s really possible to make money renting out your unused hard drive space.

Feel free to leave any comments below.