Scamion (found at scamion.com) is a relatively new website that promises to help protect consumers by providing business reviews, complaints, reports & contact information… But although on the surface their intentions may seem to be good, I recently came across something that made me think otherwise…

In fact it seems the Scamion website itself may have completely ulterior motives altogether – which could be both dangerous & damaging to legitimate businesses by not only defaming them, but by tricking them into paying for the removal of falsified negative comments.

So if yourself or your business has been targeted by a negative report on Scamion which you believe to be false or which you would like removing then I strongly suggest you read this entire post to find out what REALLY seems to be going on – and what the true best course of action is to get the negative comments removed.

Scamion is a website that claims to provide consumers with the right for their voices to heard & it provides a platform for them to leave comments about a person or business & to have others (including the person/business itself) respond back.

On the surface this all seems fair & well – if consumers get treated badly then they can use the platform to warn others and I’m certainly all for supporting that.

BUT there are some immediate problems I want to bring to light;

The last point however I is one I’m particularly interested in, as it leads me towards believing that many of the reviews left on Scamion have been falsified in an attempt to quickly gain a large number of visitors from search engines like Google.

You see when a comment is published on Scamion, search engines then list it appropriately within their results when people search for “complaints” or “reviews” regarding that specific company.

So for example if somebody published an “Amazon scam” report on Scamion, search engines would list it within their results if somebody was searching to try and find out “is Amazon a scam?”.

Of course if the comments left are false, then this can be extremely damaging for a person or business (and around 2 years ago I actually took legal action against somebody who’d done exactly that to me, leaving them with a hefty bill for damages)… So it’s safe to say false negative comments are very dangerous & damaging for those on both sides of the fence.

But despite that, it appears on the surface that Scamion is leveraging fake negative comments in an attempt to gain search engine traffic – because how else (as shown below) could these comments be published before the website was actually live?

This website is relatively new, however once I signed up i was asked to submit some details, unfortunately i added a credit card absent mindfully. It was only 10 days later my bank rung me, and informed me this card was being used for false identity purposes, they were able to track it back to this website.

And the reason I’m open to share that with you is because quite obviously it’s absolutely untrue.

I mean let’s take my website for example, having been launched in 2012 (7 years ago at the time of writing this post) it’s certainly far from being “relatively new” as the claimant describes… And in it’s entire time of existence it has NEVER processed payments.

No credit cards, no PayPal, nothing… I mean go on, I actually challenge you to try & find somewhere on my website to enter any payment details.

All of the revenue I generate is through affiliate relationships & advertising – meaning I promote products from third party companies (like Amazon) in return for commissions. So not only does that mean I’ve never personally processed a transaction, it also means that my reference would never show up to a bank.

In short, the complaint from start to finish is a total lie.

…which is why I’m now in the process of taking legal action against Scamion.

But Things Get Even Worse…

Not only is the comment totally false, but it also appears that the owner of Scamion (whoever he/she may be) has blocked my attempt of providing a response via the comment form underneath the complaint.

You see I took the time to explain politely why the comment was false, to prevent my reputation from being tarnished by this nonsense – however it was never published on the Scamion website.

However shortly after a comment appeared posted by somebody else questioning whether or not the initial comment was really true – so clearly no it’s not automated, there is some moderation going on at Scamion.

It simply seems they’re not interested in hearing from the people/businesses that are trying to defend their reputation.

And Then I Found Out Why…

However what I did notice was that almost EVERY single search result associated with Scamion was providing a paid service to have negative comments removed, as shown below: 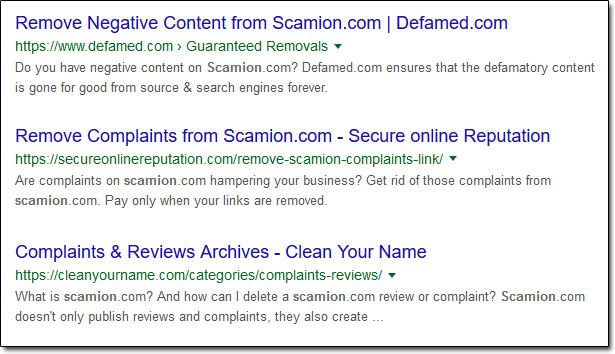 I decided to check one of those sites out and here’s what I was presented with: 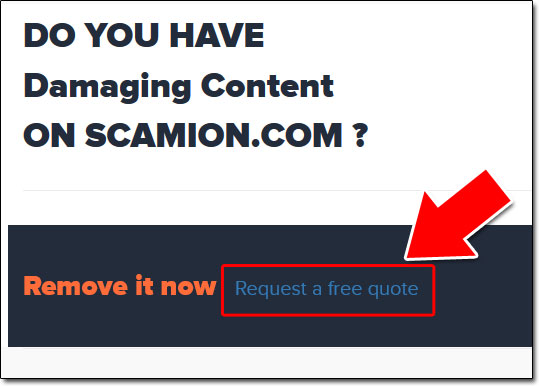 So in my opinion it looks to me that Scamion are leveraging false complaints to get traffic from Google, and are then charging people via other websites to remove this content. If true, it’s clearly a VERY dodgy practice indeed.

Is Scamion a scam itself? In my opinion it sure looks that way.

Which brings me onto the most important question…

How To Remove Complaints From Scamion

Honestly the easiest thing you can do is legal action, because not only is it free (as lawyers LOVE jumping on genuine defamation cases because they’re so easy to win) – but you’ll also get yourself a nice cash lump sum from the damages caused.

So if you can prove the comments are false, take your evidence to a lawyer, tell them about it & boom – let them do the rest. The content will get taken down, the owner (or author) will be sued (depending who is deemed to be accountable for publishing) – and the money is payable directly to you in return for the damages that may have been caused by the comments.

Oh and by the way damages don’t just relate directly to business damages (i.e. loss of customers)… You can claim for almost any sort of damages that may have come as a result from the comments left.

But yeah, either way whether you decide to pursue legal action or not – please do at least leave a comment below to let me know if anything similar to you has happened on Scamion. I’d be very interested to hear about it. 🙂