The Auto Home Profits system claims to be the number 1 choice for an internet career & states that it can guarantee jobs paying up to $379 per day to anyone who can spare a mere 60 minutes of their time working from home. 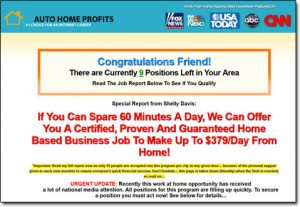 It’s hardly surprising that this system has got a lot of people talking, but is it really legit, and can you really make any money from the Auto Home Profits system?

Those are the 2 things that I aim to uncover right here in this review so if you’re looking to find out if the AHP system a worthwhile opportunity then you can rest assured that you’re in the right place to find out.

What Is Auto Home Profits?

According to the website itself, it claims to be “the web’s highest profiting work-from-home program” & it has supposedly been launched by a lady named Shelly Davis (but that’s unverifiable & likely to be untrue).

You’re led to believe that after purchasing the program for $97 you’ll be guaranteed a home-based job that will pay you up to $379 per day with just 60 minutes of work & whilst the sales-letter for the program is very long the website employs a few tricks to rush you through it & get you to purchase the program ASAP.

But despite the sales-letter for the program being extremely long, you’re given very little information on how it is actually supposed to work. In fact to put it into perspective out of the 6,106 word long sales letter only 84 of those words go on to mention how it’s supposed to work which is pretty shocking.

Usually when programs conceal information on how they work they do it because they know if they told you the full truth upfront you probably wouldn’t purchase it, so this raises my suspicions right from the start.

The rest of the content on the website is just hype that’s been put together in an attempt to get you excited about the possibility of working from home, possibly to draw you into what potentially looks like a scam.

How Does Auto Home Profits Work?

Even at just a glance, this system looks very suspicious but what raised my concerns, even more, was the process as to how it’s actually supposed to work… that really is suspicious.

As you can probably imagine generating $379 per day online (or offline) is no small feat, and if it was then everybody would be doing it. It’s possible, but it’s going to take a lot of work there are no 2 ways about it.

So when a program promises (or should I say guarantees) that you can start making that kind of money in “just 3 easy steps” alarm bells really do start ringing in my head.

Especially when the steps are along the lines of this:

Choose a company that you’d like to post links for (companies include the likes of Oakley, Netflix, Amazon).

Build a website using their system (and yes, their instructions are literally as brief as that).

Don’t worry, I was too – and that’s because even the creators of this product don’t really know what you actually need to do to make money with it. They’ve tried to put together some false steps to make it seems like there is a genuine method behind the system but the truth is, there isn’t.

Basically, the website consists of nothing but lies & that became obvious when I took a closer look at the disclaimer at the bottom of the page. There is one sentence that reveals the truth about this system.

If you can’t quite see the text in the image above, then basically you’re told that the typical purchaser does not make any money with this product and that they do not guarantee income or success (despite them saying they do at the top of their website).

The Truth About How It Really Works

Basically, once you buy into the “system” for $97 you’ll be told to start spamming social media sites with affiliate links & promised commissions for each of the sales that are made through your links.

Whilst you can potentially make money, I can confidently say that using this particular method you will not make a dime. Nobody is going to buy a pair of Oakley sunglasses or HP printers from a stranger that sent them a link via Facebook messaging – in fact chances are they won’t even click on it (or see it).

You’ll be down $97, you’ll have a duff method to make money & you’ll quickly have all your social media accounts banned too. Unfortunately, the only people making money from this scheme are the creators.

You will certainly not be making anywhere near the promised $397 per day and even if you put in hours upon hours of work with this method you would be very lucky to even see as little as $1 per day.

Just in case you are still interested in trying out this system (despite my warnings), I want to make it clear to you that the testimonials & alleged news coverage displayed on the Auto Home Profits is all fake too.

Well, they are not necessarily fake as such – they are simply just not in reference to this system (despite the creators trying to make you think that they are).

Similarly, the video that automatically starts playing on the homepage is not a news story about this particular system – it’s a news story that’s talking about work from home opportunities in general.

There are genuine work-from-home opportunities, but the Auto Home Profits system is not one of them.

Is Auto Profits a Scam?

This system is preying on newcomers & leverages various falsified testimonials in the hope that it can convince them into believing that it’s a genuine opportunity to earn a lot of money online. Unfortunately, it’s not, but you’ll be left to find this out the hard way since you’re required to part with $97 to gain access.

There are lot’s of genuine ways that you can make money online but Auto Home Profits is not one of them & for that reason, I won’t be recommending that you buy into this program (or even bother visiting their website).

In return for your money, you’ll be provided with nothing more than a duff method for making money online which involves spamming social media sites with affiliate links for things like sunglasses & printer cartridges.

There’s absolutely no doubt in my mind that the only people making money from this system are the creators who have put it together and the affiliates that are getting paid commissions for getting people to sign up to it. Take my advice, give it a wide berth & keep hold of your hard-earned cash.