The new Big Money Rush trading app claims to be an awarding winning app that can allegedly enable you to “get rich from Bitcoin” with just a few minutes of work from your laptop supposedly being required every day. 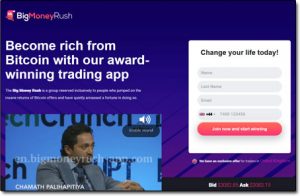 You’re led to believe that you can earn from anywhere in the world & that the app will enable you to make guaranteed profits 24/7, thus supposedly providing you with a passive income to enjoy the finer things in life.

All you need to do is sign up for free, deposit some funds & then “activate” the trading app to begin generating profits (apparently).

But is it actually legit? Or is the Big Money Rush trading app a scam that you should avoid?

Well, I’m really glad that you came here to my review before you signed up to it because I can immediately tell you right from the off that the whole thing is far from what it seems – in fact, it’s actually pretty dangerous.

What Exactly Is Big Money Rush?

In short, the Big Money Rush trading app portrays itself as being an automated app that will trade Bitcoin profitably on your behalf – meaning you’re supposed to be able to sign up to it & then earn money entirely on autopilot.

The app’s creator (who suspiciously remains anonymous) claims that you can use the app from anywhere in the world & that you only need to do a few minutes of work per day to see profits of tens of thousands per month.

You’re even told in the FAQ that some members allegedly make their first million within just 61 days (as shown below):

And as if that on its own didn’t already sound good enough, the website even states that you can allegedly get access to the trading app for free. You’re told you don’t need to pay a single thing to use it.

But wait – what’s the catch?

Surely if you could really just “activate the trading app” & earn thousands of dollars per day with just 20 minutes of work then everybody would be using it – nobody would be left working a job & the world would be in crisis.

Well, I’m sorry to be the one to break the news to you but the truth is that the whole thing is a big fat scam.

The reason I can say that so confidently is because I’ve already exposed this exact same scam several times right here on this blog. The person behind it (who remains anonymous) just keeps changing its name & appearance to try to escape the reviews which expose the truth.

Some of its previous names include Crypto Method, Bitcoin Method & Bitcoin Circuit.

But of course, I don’t expect you to “take my word for it” when I say it’s a scam because I appreciate that you might have been really hoping it was going to work for you… So instead keep on reading & I’ll show you first-hand what’s really going on below…

How Does The Big Money Rush App Work?

So the website promoting the Big Money Rush trading app software leads you towards believing that you just need to sign up, make a deposit & then activate the app in order to begin generating profits… But that’s not true.

The whole Big Money Rush app is a phoney & the truth is that it’s just been designed to trick you into depositing with a binary options broker that the creator is affiliated with.

This means that when you deposit, he gets paid a commission at your expense – and what’s worse is that the binary options broker you’re recommended to deposit with is actually an unlicensed rogue.

They’re basically both in cahoots together & they just want to take as much money from you as possible.

The creator of the Big Money Rush app has actually gone to the lengths of creating a fake trading system which tricks you into thinking that you’re actually profiting so that you’ll deposit more money with the broker to try to increase your profits.

The problem though is that it’s not really connected to any live markets – it’s all fake – it’s basically nothing more than a video game.

And the fact that the creator of the Big Money Rush app is affiliated with the broker literally PROVES that it’s a scam because binary options brokers (which is what you’re recommended) only make money when you lose money.

If you win with a binary options broker then it actually costs them money. The reason for this is binary brokers don’t work like normal brokers & instead of “investing” via them you’re basically just placing bets on which way you think the value of something will go… So if you’re right, then they have to pay you out of their own pockets.

Now with that in mind ask yourself this – why on earth would a binary options broker (who only makes money when you lose money) pay commissions to the creator of a trading app which could supposedly guarantee you profitable trades?

The answer is that they wouldn’t – there’s absolutely no way because it’d make them lose money. The real reason they’re paying the creator commissions is because they know the system is actually built to make you LOSE money (and lots of it).

And even in general without these scams trading apps binary options trading is still SUPER risky. It’s so risky that as shown below even Forbes themselves put out an article warning against the dangers of it:

The reason it’s super dangerous is because it’s 100% geared towards the brokers, not you. It’s designed to sound easy but statistically, you actually have more chance of making money by playing the roulette table (and you likely know how much of a bad idea that is).

The reason for this is because the time periods the “bets” are made over are ridiculously small. They’re usually under 60 seconds.

Plus if you win you simply get your money back plus a small profit, but if you lose then the broker takes everything… So as I say it’s entirely geared towards them just making money from you – it should 100% be avoided.

My Verdict – Is Big Money Rush a Scam?

There’s absolutely no doubt about it, the Big Money Rush app is definitely a scam & you can see solid proof of that by checking out my previous reviews of the Crypto Method & Bitcoin Method systems – you’ll see that they’re almost identical.

The whole Big Money Rush website is simply full of lies & deceit. It hasn’t been featured on the news like it claims to have been & the “testimonials” consist of photos pulled from random stock image websites – they’re not real members of the system like you’re led to believe.

As I mentioned in the previous section of this review the whole thing is just a ploy to trick you into depositing with an unlicensed broker so that the creator of it can earn commissions at your expense. It’s a disgusting scam & should 100% be avoided.

If you really want to make money online legitimately then I would advise you just stick with a proven method like affiliate marketing which is actually the same way that I personally make most of my own money online.

Affiliate marketing basically involves you promoting products or services online in return for commissions & the great thing about it is that the amount you can earn with it is completely uncapped. The harder you work, the more you stand to make.

Plus you can get started with it for free over at Commission Academy.

Alongside that, though there are also many other legit ways to make good money too which you can check out on my top picks page right here.

But whatever you decide to do I just sincerely hope that my honest review of Big Money Rush here has given you a good understanding of how it all really works & I hope that most importantly it has helped you to save your money.