Bitcoin At Home is a website that’s launched promising to provide you access to a “miracle tool” that will allegedly see you being able to mine Bitcoin right from your very own home. 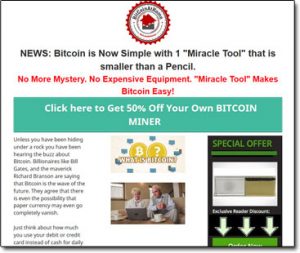 You’re led to believe that you can just purchase the USB device, plug it in & start watching your Bitcoin account grow…

But with the price of each Bitcoin currently landing at around $8,500 you might be a little sceptical, and you have good reason to be.

So what’s the deal, is it actually legit or is Bitcoin At Home a scam that’ll just see you spending more money than you ever manage to make?

Thankfully you’ve landed in exactly the right place to find out because I’ve done the digging & in this review, I’ll be uncovering everything you need to know, including how it all works & whether or not this “miracle tool” can really make you any money.

What Is Bitcoin At Home?

Bitcoin At Home is a newly launched website that claims to give you access to what they call a “miracle tool”, which is basically a small USB device that can allegedly enable you to mine Bitcoins at home without seeing you receive costly electric bills or requiring big equipment.

At a glance it admittedly all looks pretty cool and with each Bitcoin currently being valued at around $8,500 you might see it as being a way to potentially get rich from the comfort of your home…

But don’t rush into doing that just yet because as you’ll soon find out, in reality, things are not quite as great as they seem.

How Does Bitcoin At Home Work?

Basically the only person that will be making money from the so-called “miracle tool” is the creator of the Bitcoin At Home website, and he (or she) will be doing that at your expense if you happen to purchase one of these naff USB devices…

I mean I’ll admit the device does mine Bitcoin as promised, but it doesn’t mine anywhere near the amount the website leads you into believing it will… All in all, using the USB mining device you’ll probably see profits of around $0.15 per month (if you’re lucky).

And these USB devices are nothing new either, they’ve been around for quite a long while…

Here is a quote from a popular Bitcoin mining expert:

You should buy one to learn how mining works, but other than that don’t expect much!

Basically they’re good little “toys” for learning about Bitcoin & learning about how the mining process works but that’s about it. If you really want to generate solid profits from Bitcoin then sadly you DO need the expensive equipment & you WILL see costly electric bills.

Sadly though it’s just a fairytale, and like I say in reality these USB devices are pretty much just “toys”.

Don’t Fall For It…

The way the Bitcoin At Home website tricks people into buying these devices is actually pretty darn clever. I mean by technicality the website is actually “legit” since they don’t physically specific any income claims…

So because they don’t actually say it in words, they’re getting away with tricking people into buying these devices because people visiting the site just automatically assume the device will generate them good wealth.

But if they complain & ask for a refund then the creators of Bitcoin At Home will just turn around & state they didn’t specify that it would guarantee any certain results so the refund request will be denied.

This means that if you purchase a Bitcoin At Home USB mining device you’ll be stuck with it. You’ll have paid $55 for a device that will probably only earn you around $0.15 a month in Bitcoin… Which means it would take you 30 years just to get your money back.

The truth is that you can actually get these same devices much cheaper elsewhere too – for example the Avalon Nano 3 USB miner as pictured below only costs a mere $19.99 in comparison:

Is Bitcoin At Home a Scam?

Well, it’s not a scam as such since they do actually provide you with a USB Bitcoin mining device in return for your money, but it’s pretty misleading & the website makes you think you’ll be able to generate good wealth from the device which simply isn’t true.

It seems to me that the creators of the Bitcoin At Home website have just bought a whole bunch of cheap USB mining sticks, spruced up their appearance & decided to resell them through their website at a much higher cost… Whilst using this “trickery” to get people to hand over their cash.

Therefore overall I’m not going to be recommending that you purchase a mining stick from this site because I feel like ultimately you’ll just end up disappointed & will probably find yourself wanting a refund.

If you want to find a REAL way to make extra money then check out my top picks by clicking here.

Hopefully, you found my review here useful though & more importantly I hope it helped you save some cash. If you do happen to have any further questions or comments feel free to leave them below & I’ll do my best to respond as quickly as I can.