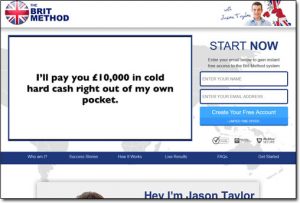 Quick Summary: The Brit Method is a system that’s consists of nothing more than false hype & fake promises. It’s one of the latest binary options scams to surface and its only intention is to part novice traders with their hard-earned cash.

Read on for my full review…

Rest Assured I’m Not Affiliated With The Brit Method

I’m about to jump in & expose this system for what it really is but before I do that I want to make something very clear to you right from the very start, and that is the fact that I am in no way shape or form affiliated with The Brit Method system (or should I scam).

The reason I want to make that very clear to you is so that you can rest assured that you will be reading the honest truth about this system. You see, I’ve noticed that there are several other reviews for The Brit Method system but they are biased because they’ve been written by affiliates who are actually getting paid commissions for each new person they get to join.

Some of the reviews even contain outright lies in an attempt to trick you into signing up, so I’ve taken the time out today to put this review together because I want to deliver the real truth about this system.

What Is The Brit Method?

The Brit Method is one of the latest so-called “free” binary options systems, and whilst it’s operating worldwide this particular system has a primary focus of targeting folk living in Britain.

The system has allegedly been put together by a guy named Jason Taylor who claims he’s going to take you by the hand and help you make hundreds of thousands of pounds in the next 30 days. He also claims that if you don’t make it, he’ll pay you £10,000 out of his own pocket.

Obviously, both of those claims are absolutely outrageous, and in reality, our star trading expert “Jason Taylor” doesn’t actually exist. It’s just an alias that’s been put together to hide the real identities of the crooks behind this system.

How can I be so sure our man Jason Taylor is a phoney?

Well, because I discovered a similar scam running under the name of “The Aussie Method” which seems to be a re-hash this time targeting Australian folk instead of Brits, only in this version our man Jason Taylor seems to be called Jake Pertu. See for yourself:

I even found another similar scam running under the name of “The Oxford Method” too, this time featuring a Mr Evan Wright… 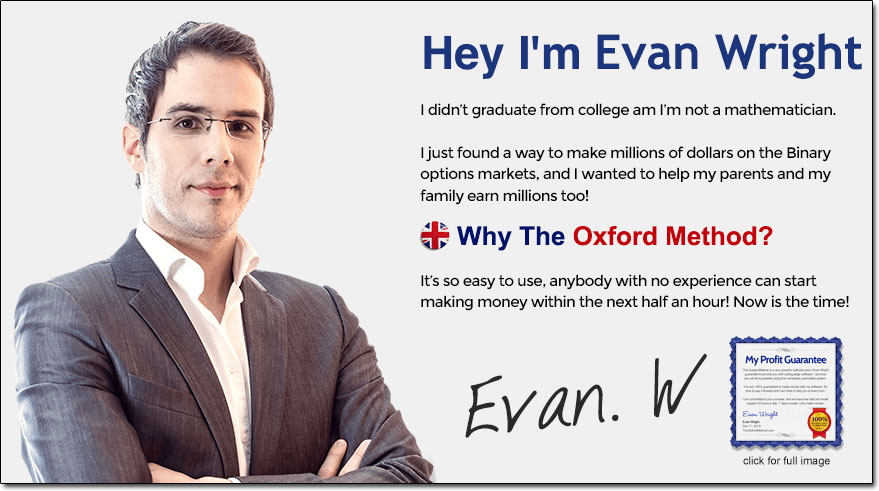 The “Success Stories” Are Fake Too…

Whilst the sales video for this system makes many outlandish claims that may make you think twice about joining, the rest of the website boasts success stories in an attempt to draw you in & make you think that just maybe it could actually be real.

The problem is though that none of these success stories are real – they’ve all been faked in an attempt to lure you into a false sense of security.

There’s a couple of telltale signs, but one of the main ones is the fact that none of the names displayed in the so-called Twitter & Facebook live feeds actually link back to the person’s profiles. You’re also only provided with the first names of the people so that you can’t do your own due diligence and search for them on the networks yourself, because obviously if you did you’d quickly find out that they weren’t real people.

But The Lies Don’t End There…

If you scroll down The Brit Method website and take a look at the frequently asked questions you’ll notice there’s a question that says “is the Kiwi Method really automated?” as shown below:

It quickly became clear that The Brit Method was actually a re-launched version of the Kiwi Method which my investigation revealed to be a dangerous scam that launched early in 2016.

So basically The Brit Method is just the same old scam but it’s been dressed up in different clothing & re-launched in an effort to scam even more people.

No doubt by now you’re probably wondering how a so-called “free” system can actually scam you so I want to give you the full details as to how this operation actually works so that you can understand for yourself.

You see, The Brit Method system is nothing more than a ploy that’s been put together to try and convince you that you’ll be able to make profitable trades. In fact, they don’t even need to fully convince you, all they want you to do is get you to just “give it a try” to see if it really works.

The reason they want you to do this is that in order to use the system you’ll have to deposit via their recommended broker, and they’re actually in the partnership with the broker that they recommend which means they get paid a huge commission when you sign up and deposit with them.

All these guys want you to do is sign up with the broker that they recommend and deposit funds so that they can earn themselves a big fat commission. Then, once you do that & get access to the system you’ll find out that it doesn’t actually work as promised.

But this is the part what catches most people out because the majority of people who get sucked in by these scams get sucked in because they think that they’ll be able to just get their money back – but it doesn’t work like that.

The brokers these guys work with are not regulated brokers & if you think you’re going to be able to get your money back then think again. They will pull every trick in the book to keep hold of your money and because of the way that they process their payments they make it very unlikely that you’ll be able to get it back.

Basically, you may as well wave goodbye to any and all of the money that you deposit into this system. There is no “trying it out”, you either avoid it or get scammed.

The worst part though is that the scam doesn’t end once your money is gone, in fact, that’s when the scam is only just beginning. As soon as you run out of funds the brokers will call up your phone & encourage you to deposit even more funds claiming that there was a glitch in the system the first time around & that the next time you’ll profit for sure. They prey on your desperation, and 9 times out of 10 it works & they get people to deposit even more money.

What you have to realize is that binary options brokers do not charge fees or commissions, they make their money when you lose your money. It’s simply not in their interests to help you make money, nor is it in their interests to partner up with a system that helps you to profit. The reason they have partnered up with the guys behind this system is that they know that this system is designed to make you lose your money quicker.

Is The Brit Method a Scam?

The Brit Method is an outright scam and it should be avoided at absolutely all costs. There are many genuine ways to make money online but The Brit Method is not one of them and nor is binary options trading in general.

Binary options is actually so risky that the USA have called for a ban on it & the UK are also looking into banning it too. It’s designed to look easy & it’s designed to make you think that you can use logic to make profitable trades but in reality, it’s nothing more than a gamble.

There is absolutely no way you can use any form of logic to profit from binary trading because the trading windows are simply too short & there are far too many fluctuations in those small periods of time. The only people profiting from binary options are the brokers and the crooks pushing these bogus systems.

My advice is for you to stay well away from binary options trading and look for an alternative way of making extra money instead, there are certainly plenty & I have written about many of them right here on this blog – just take a look around.

And on that note I’d like to say thanks for reading this post, I hope it gave you a good insight into how this system works and more importantly I hope I was able to prevent you from parting with your hard-earned cash. If you have anything you’d like to say then be sure to leave a comment below, I always love hearing from my readers.