It all started after I clicked the ad for her Consistent Profits program on Facebook… Now, Valerie Fox (the Forex trader) is a person I just can’t seem to get away from.

Everywhere I go online, there she is once again, trying to get me to sign up for her Forex course…

But despite Valerie Fox seemingly being legit (and from what I can see, a fairly nice person), there are good reasons why I didn’t (and won’t) join her Consistent Profits program.

In this Consistent Profits review, those reasons are exactly what I’ll be sharing with you.

So if you’ve also discovered Valerie Fox’s Consistent Profits program & have been wondering what it’s all about & whether or not it’s actually legit, be sure to stick around & read this review.

It’s going to contain everything you need to know.

What Is Consistent Profits?

Consistent Profits, as Valerie Fox puts it, is a program that can allegedly enable you to start trading in 7 days without using complicated trading strategies, sacrificing a lot of time, or investing large amounts of money.

Here’s a screenshot of that claim from her website:

She also then goes on to claim that you can start with just $100, scale quickly and, I quote, “make your trading dreams a reality“.

But to be honest, you probably sussed all that out from the name.

In short, her course claims to provide you with an easy way to begin generating Consistent Profits from Forex trades… And her marketing almost leads you to believe there’s no possible way that you could fail.

But is that really true?

We’ll find out in just a moment but first, before we do, let’s take a closer look at Valerie Fox herself.

Who Is Valerie Fox?

Well, according to her own website, Valerie claims to be “a proven, profitable trader and an online, trading strategy and mindset coach“.

She also claims that she “empowers traders to achieve time and financial freedom so they can do more of what they love“.

But is that really true? Is Valerie Fox really a proven, profitable trader?

Well, I did some research on Valerie & stumbled across her LinkedIn page. It seems she’s certainly had a lot of jobs over the years with her most recent job coming to an end in June 2020.

However, after that job came to an end, Valerie added another position to her LinkedIn profile in which she claims to be an “Investor & Analyst” in the FX markets.

What I find odd about that, however, is that she claimed to begin doing this in 2011… And yet, during that period she changed jobs 5 times.

I mean, why not just let Forex pay the bills?

My only guess is that her Forex profits during that period weren’t too exciting.

But the reality is that we’ll never know because despite claiming to be a “proven, profitable trader”, what I’m trying to highlight here is that there isn’t really any proof at all.

So we’ll have to take that claim with a pinch of salt.

However, on the coaching side of things, I can say more positive things about Valerie.

From her social media pages, it’s clear for me to see that she knows a lot about the Forex markets & more importantly, it’s clear to see that is spending quite a lot of time actively helping people with their trading.

So Kudos on that side of things.

But does that mean she can actually help us to make money with Forex? Let’s find out…

Well, Valerie certainly knows a thing or two about the concepts of Forex trading & she appears to actively help the members of her course in her social groups so as far as Forex courses go, Valerie’s looks fairly decent.

However, there is one important thing that you should take into account & that’s the fact that when it comes to making money with Forex, the only realistic way to do is to sell courses teaching others how to do it.

That’s why there are so many people trying to sell Forex courses. Most of these “Forex mentors” don’t even make any trades at all, they just fake it to sucker people into their courses.

I wrote a more in-depth post on that right here.

You see, given that the Forex market is what’s known as a zero-sum market, this means that making money with Forex trading itself is extremely tough & that the odds are pretty much set against you.

And in case you don’t already know, a zero-sum market means that for one trader to make a profit, another trader will need to make a loss. The Forex market does not itself add value to the market.

So because a lot of the currency movements are directed by large well-financed corporate institutions and banks, who are better informed about the market as a whole, the undercapitalised trader is always likely to lose.

This means that whilst making money with Forex looks appealing from the outside (and is made to look appealing by many “mentors”), in reality, it’s not all that great… And it will likely just result in you losing money.

That’ll see you generating results much more quickly & more importantly, much more safely since you won’t have to put up a whole bunch of capital in order to get started. You can get started for free.

It’s true, you can get started with quite a little amount when it comes to Forex as it’s a high leverage market but this doesn’t necessarily mean you’ll find it easier to make any money.

And here’s the biggest reality check. This law firm says the following within their section entitled “how do I spot a Forex scam?”:

Be aware that like any professional skill, it can take years to master the Forex trade properly. Any claim that says ‘you can make money quickly’ should be avoided.

So back to Valerie Fox’s claims about getting started in just 7 days… Well, that just simply ain’t gonna happen. As nice as she may seem, she’s just yet another “mentor” trying to lure you in & make money at your expense.

I’d personally give her course a wide-berth.

Is Consistent Profits a Scam?

The Consistent Profits Forex trading course by Valerie Fox isn’t a scam, but at the same time I think it’s a little misleading & in reality, Forex trading is way more difficult than Valerie makes it out to be.

Furthermore, Valerie also goes on to claim that her program yields members an average of 10-16% per month & as far as I’m concerned that is just a completely outlandish claim. 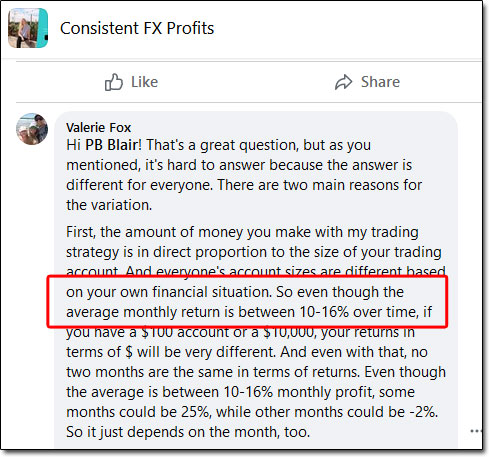 As stated in this article, for the majority of professional traders, the average Forex monthly return is between 1 to 10 per cent per month… So, 10-16% on “average” is just a fantasy, as far as I’m concerned.

But does that alone make Consistent Profits a scam? In my opinion, I don’t believe so. Her course undoubtedly provides helpful information, but for a whopping $1,995… You can count me out!

So, as for my final verdict… Consistent Profits is not a scam but at the same time, in my opinion, $1,995 is just way too expensive for a course that isn’t backed up by any verifiable proof of results.

Valerie Fox does certainly appear to be a very nice & helpful person but for me, that alone is simply not enough to justify the cost of her course.

Proceed at your own risk!