Affiliate marketing involves you promoting products or services online & getting paid commissions in return from any sales that you successfully manage to generate. 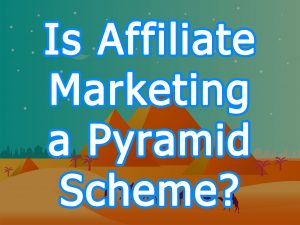 So, does that mean affiliate marketing is one of those pyramid scheme things?

After all, pyramid schemes are all about referring, recruiting & promoting so-called “products” to people, right?

Well, the good news is no, it doesn’t… And right from the off, I can (thankfully) tell you that affiliate marketing isn’t a pyramid scheme… Nor is it a scam & sadly in most cases, nor is it a way to “get-rich-quick”.

In short, affiliate marketing (when done correctly) is a legitimate means of earning money than can provide you with the ability to generate a sustainable & very good income online, even if you don’t have any technical skills whatsoever.

And on top of that, it can also provide you with the opportunity to earn as much as you desire.

But I’ll admit, there is definitely a dark & dangerous side to affiliate marketing & so as a result, I’ve decided to put this post together to help you stay on the right track & avoid the pyramid schemes that disguise themselves as affiliate marketing opportunities.

What Is Affiliate Marketing?

Affiliate marketing is a means of earning money online that basically involves you promoting products or services on the behalf of third-party companies & then taking commissions from any successful sales.

So as an example, you could sign up to become an affiliate of Amazon (which is free to do) and then that would give you the opportunity to be able to promote any of the products from their website via a unique, special link known as an “affiliate link”.

You could then promote that link online & if somebody happened to click through it & make a purchase, the sale would be tracked back to you & you would be paid a commission from the sale.

It’s basically like “freelance advertising”… You advertise products or services for various companies & then if the people you advertise them to happen to make purchases, you get paid in return.

And the best part is that there are absolutely no limits on the amounts that you can earn. In fact, it’s not uncommon to come across affiliate marketers that are earning over 5-figures per month.

And most importantly, it’s perfectly legitimate.

Nearly all of the big-name companies such as Amazon, eBay & Etsy run affiliate programs through which you can sign up and promote their products/services in return for money.

So you can certainly rest assured that it’s “the real deal”… But as I mentioned at the beginning of this post there can be a bit of a dark side to affiliate marketing which I’ll explain more about in a moment.

First, let me give you a better understanding as to what a pyramid scheme actually is…

What Is a Pyramid Scheme?

According to Wikipedia, a pyramid scheme is defined as follows:

A pyramid scheme is a business model that recruits members via a promise of payments or services for enrolling others into the scheme, rather than supplying investments or sale of products.

And the reason it is named a “pyramid scheme” is because it operates across multiple levels, forming the shape of a pyramid as it grows.

So, as an example… Let’s say David decides to set up a pyramid scheme. He tells his friend Janet that she can earn lots of money by recruiting others into scheme & that she just has to pay £50 to get started.

David earns £50 by bringing Janet into the scheme, and then Janet begins recruiting others by telling them the exact same thing. All they need to do is pay to join her, to begin making money.

So Janet manages to refer 2 new people, Josh & Lisa, who both also pay £50 each to join the scheme.

Janet takes a cut of the profits for herself, let’s say £30, and the remainder is passed up to David who is sitting at the top of the scheme, so David earns £20 from Janet’s efforts.

And the cycle continues on & on from there, down more & more levels, until it finally forms the shape of a pyramid.

The Problem With Pyramid Schemes

At a glance, a pyramid scheme may appear to present a great opportunity to earn money & that’s why so many get lured into them… However, in reality, such schemes are geared to only benefit those at the top.

And sadly, those who come into the scheme later on just end up losing money.

You see, unless you’re positioned at the top of the scheme, your “success” relies entirely on your promotions. This means that if you can’t (or don’t know how to) efficiently recruit new investors, you won’t be able to recoup the funds you invested.

And the FTC reported that fewer than 1% of the members of such schemes actually manage to “make money” from them.

Yet despite that shockingly low success figure, most pyramid schemes promote themselves as providing a very easy (and often entirely automated) way to begin earning money.

The lure people in through the promise of easy returns & then after investing, people are forced to desperately recruit others in order to try & recoup back some of the money they put in.

So, in short, it’s pretty clear to see that pyramid schemes are bad news.

Which brings me onto the meat & bones of this post…

Is Affiliate Marketing a Pyramid Scheme?

Here’s where things can get a little tricky.

So, how can you tell the difference between a legitimate affiliate marketing program & a pyramid scheme?

Thankfully, there are a couple of easy ways…

And secondly, the program should pay commissions over 1 or 2 levels at most. There are some exceptions to this case, such as in the case of MLM’s… But if a program pays over more than 2 levels, you should definitely take a closer look into the real value of the product or service being promoted.

If the majority of the revenue coming into the company is from genuine, retail sales of the product/service (aside from people just purchasing it simply to make money) then it would be legitimate…

But if there are multiple levels and the company’s primary revenue is coming from members that are purchasing the products purely to earn money by reselling them to others, then it is likely a pyramid scheme.

So, to summarise in short…

You purchase a pair of headphones from Amazon. You find yourself pleased with the headphones & wish to promote them to others. You join the Amazon affiliate program & begin sharing the headphones using your affiliate link. Somebody purchases them, you earn a commission.

And now, onto pyramid schemes…

Example of a pyramid scheme in action:

Lauren gets told by a friend about an opportunity to earn money by selling beauty products but is informed that she has to purchase some products herself in order to get started. Lauren purchases the products but then discovers that the primary means of earning money is by recruiting others into the business opportunity as opposed to actually selling the products. Products are only been purchased by members looking to qualify to earn revenue.

How Can You Become an Affiliate Marketer?

Now that you know affiliate marketing is a legitimate (and very good) way to earn money online, the next question you’re probably wondering is how can you get started?

And the good news is that I’ve put together a free guide covering that exact question.

Plus, I also cover some of the most frequently asked questions such as:

Affiliate marketing is a truly fantastic way to earn money online & it is an opportunity that it is available to everybody around the world, including those with limited technical skills.

The good news is that after reading this blog post you now know the truth about affiliate marketing & most importantly, you now know how to safely take advantage of it & avoid the dangerous schemes.

So I really hope that this post has helped bring a clearer understanding of affiliate marketing & I also hope that it has helped you to learn how you can actually get started with it as well.

Hint: Check out my free guide for getting started with affiliate marketing.

And of course, if you happen to have any questions or comments then please don’t hesitate to leave them below. As always I will do my best to respond to them as quickly as I can.