It’s safe to say that there’s been a lot of hype around Bitcoin lately and that hype only seems to be ever-increasing as the price of Bitcoin continues to rise. 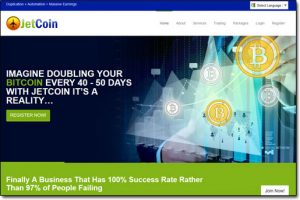 However, with all this hype surrounding BTC many people are taking it as an opportunity to make a quick buck.

There have been hundreds, in fact probably thousands of fake Bitcoin “investment schemes” surfacing which promise amazing returns but end up shutting up shop & disappearing leaving people out of pocket & red-faced.

That’s because many of these so-called “investment schemes” aren’t investment schemes at all – they’re modern-day Ponzis that have been put together with the sole intention of making the owners very, very rich… And as much as they say they care about their members – frankly, they don’t.

Meaning it’s safe to say that getting involved with any Bitcoin opportunity presents a HUGE risk (unless of course, it’s licensed & legit).

Well after taking a quick glance at their website you might be led to believe so since it looks fairly professional to the untrained eye, however, there are several warning signs for a start.

The first warning sign is the fact that they make extremely bold promises of “easy riches”, and claims a 100% success rate (which simply isn’t true – or sustainable).

Here are just a few of the many bold claims made by JetCoin:

And whilst investing & trading Bitcoin is risky enough by itself, combine that with recruiting (which is mentioned by JetCoin) and you’re potentially asking for BIG trouble as that sure as heck immediately screams Ponzi… Which by the way, is illegal.

The other big red flag with JetCoin is the fact that the creators have gone to a substantial level of effort to hide their identity – which certainly isn’t a typical act for a reputable company. In fact, it’s actually the hallmark of a scam.

There’s no address, no names… Nothing at all listed on their website. Even the registration of their domain name is set to private (and was registered less than a month prior to launching).

This makes me think that JetCoin is potentially yet another “churn and burn” style investment scheme whereby the owners launch it, promote it like crazy then disappear after a little while & finally relaunch under a different name… Trace free.

I personally would NOT get involved in ANY investment scheme whereby the owner’s details are not publicized and verified. That is a HUGE risk, and again a sign that you are potentially participating in something that’s illegal.

Whilst I’ve made it fairly clear that I personally would not recommend getting involved with JetCoin, I appreciate that some people reading this review may (despite my advice) still be interested in the opportunity itself.

For that reason, I still want to provide you with all the facts about the company & how it works so that you can make your own informed decision as to whether or not you want to join.

Basically, in order to participate in the program, you must first invest in a package. I’ve outlined the cost of the packages below:

At the current price of Bitcoin to USD the smallest investment would be around $140, with the largest single investment being a whopping $22,479. I certainly wouldn’t like to think I was handing over $140 to a company hiding their identity let alone over $22k but hey ho – each to their own. ?

The other important thing to mention is the fact that there is clearly no product here, and there is no mention as to where the ROI is coming from. It looks blatantly obvious to me that they are using the investments of new members to pay off existing members which as you can imagine is certainly NOT sustainable.

I’d like to add that the statement I’ve made is merely an assumption, but since there is no evidence to prove otherwise I am confident in my own opinion that it’s true.

How Do You Earn Money With JetCoin?

Once you’ve purchased a package you are then told that your income will double every 40-50 days. How quickly your income doubles depends on which particular package it was that you bought.

Essentially what they are saying is that if you invest $22k in package 8, that you will receive an additional $22k every 40 days. If that was true (and legal) everybody would be doing it… And they’re clearly not, so clearly, something is suspicious.

Again this brings me back to the point about the fact that the revenue they are using to pay off investors is coming from new investors coming into the scheme. So whilst you are promised $22k every 40 days, this would only happen if they could bring in new people who are investing that amount of money.

Basically, it’s a VERY risky (and illegal) concept if that’s the case.

Now alongside the investment scheme, they also run a recruitment scheme (which falls in line with what we’ve just mentioned above). By recruiting new members you are given the ability to boost your earnings – in typical Ponzi fashion.

They operate a binary compensation plan which is something you may be familiar with if you’ve ever been involved with network marketing. Basically they “share” out the profits and you receive a percentage of your referrals (and their referrals) investments. The percentage amount depends on which package you invested in – the higher the investment the higher the percentage of profits you will receive from the binary compensation plan.

JetCoin isn’t the first to launch this type of BTC income opportunity & by the looks of things at the moment it certainly won’t be the last.

Whilst it might look interesting at a glance & potentially lead you into thinking that you’ve discovered a golden opportunity it’s very risky and based on the track record of the other companies that have launched before it it’s certainly not something I’d recommend getting involved in. Not to mention the fact that it’s borderline illegal.

I mean yes, if you were literally the first person in & it became popular you could have the opportunity to make a bit of money (if you were lucky), but how do you know you are not the last person in? If you are the last person, you invest your money & you have absolutely no hope of getting it back.

The only way to get it back would be to sucker more people into the opportunity (scam) so that you get your funds back but now this means that they have lost theirs.

One thing I do know for sure is that these Bitcoin opportunities are going to be responsible for breaking up a lot of families & friends!

Take my advice & steer well clear of these kinds of opportunities. In this instance, the good old saying applies, that if it sounds too good to be true it probably is.