Lead Lightning calls itself a “commission-spitting machine” & claims to be the world’s most powerful lead generation & money-grabbing system in existence. 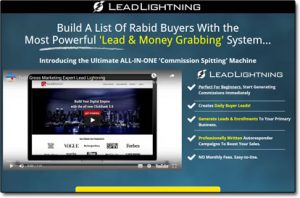 Plus it also claims that you can get full access for just $7.

No monthly fees, no additional fees – nothing… Just hand over a one-time fee of $7 & you can get access to the “world’s most powerful lead generation system”, allegedly.

So if like me you’ve come across the Lead Lightning marketing system, you’re probably pretty sceptical about it.

Is Lead Lightning a scam? That was my first thought when I came across it – and so to find out I decided to take a closer look into it to see exactly how it works & whether or not it lives up to its bold claims.

In this Lead Lightning review, I’ll be uncovering my findings, exposing the hidden costs (of hundreds of dollars) & determining whether or not it can really help you to make money.

What Exactly Is The Lead Lightning Marketing System?

The Lead Lighting marketing system is something can supposedly help you to generate a “buyer list”, which is basically a list of email subscribers that have purchased something from you.

This is generally the best type of email list to own because not only do you know that the people on it are willing to hand over money to you, but also because they’ve handed over the money they’re going to be much more engaged in your emails.

For example, if I signed up for a free service & started getting emails, chances are I’d ignore them.

If however I signed up to a service & made a payment to do so, then chances are that I’d open their emails to see what they have to say.

And on top of that, the Lead Lightning marketing system also boasts that it can enable you to start making commissions immediately.

Instant $6 commissions, that’s what it claims.

So for a mere $7 sign-up fee, you can allegedly not only begin generating a buyer list but you can also start earning instant $6 commissions – and you’re almost led to believe that it’ll happen on autopilot.

Unfortunately, though it won’t, and when you see how it really works in the next section you’ll probably think twice about wanting to actually get involved with it.

How Does The Lead Lightning Marketing System Work?

So the idea is that you’ll buy-in for $7, then promote the same thing to others – earning $6 when they sign up…

But there’s a catch.

The catch is that if you want to be able to earn commissions by promoting the Lead Lightning marketing system to others then you’ll need to purchase one of their various different affiliate packages.

If you don’t purchase one of those then you won’t be able to earn from the Lead Lightning system – the only thing you’ll be able to do is use the sales pages inside to promote your current business opportunity.

The problem with this though is that unless you force those people to purchase Lead Lightning first, they won’t be “buyers” since they haven’t actually purchased anything.

And why would you want them to purchase it if you’re not going to earn from it?

This, therefore, means that in order to use the Lead Lightning system as advertised, you MUST purchase one of the additional affiliate packages.

Let’s take a look at them then…

In total there are 3 affiliate packages, Regular, Silver, Gold – and then on top of those, there are also 2 “upsell” packages which I’ll run over below as well.

The Regular membership costs $7 & once an affiliate has purchased this they will then be able to earn $6 from any of the frontend sales they generate by referring people into Lead Lightning.

Despite the Lead Lightning marketing system repeatedly claiming on its home page that there are absolutely no monthly fees, the truth is there are as the Silver membership comes in at $29.97 a month.

At the Silver level affiliates can earn $6 on frontend sales & then a $15 monthly recurring commission from any Silver affiliate members they refer.

Despite Lead Lightning claiming in their income disclaimer that they pay on product sales & not recruiting (as shown below), it’s quite clear here that they are indeed paying for recruiting, as they’re paying commissions on affiliate members, which isn’t a product.

The Gold affiliate membership costs $53.97 per month & this not only entitles members to earn $6 on the frontend sales, but it also enables them to earn $20/month from any sales of the Silver & Gold memberships they generate.

This means that it’s therefore quite clear that push is on getting you to recruit people into Lead Lightning who are then going to recruit others – as the biggest commissions come from getting other people in who will also recruit others.

Kinda makes the whole thing start to resemble something like this:

And as you’ll see in just a second after I explain the additional “upsells” inside of Lead Lightning, things quickly get a lot worse.

First though, the upsells…

Alongside the affiliate memberships that you can promote & earn from, there are also 2 other additional upsells that you can earn from inside of Lead Lightning.

These are the Diamond membership & Platinum memberships.

Now the Lead Lightning marketing system operates a multi-level commission structure which means that on top of those direct commissions, you can also earn from the efforts of those you recruit beneath you.

And this is where things get pretty shady…

The Lead Lightning system works on a “pay-to-play” style structure, meaning that in order to be eligible to earn commissions from “products” that you sell, you must have first personally purchased them.

And of course, I use the word “products” lightly because most of the commissions come from the affiliate membership, not the “product”.

So as an example if you’re a Gold member & you refer somebody who purchases both Silver & Gold, you will earn the commissions from both of those sales.

However, if you’re a Silver member & you refer somebody who purchases Silver & Gold, then you will only earn commissions from the Silver membership & the Gold sale will be passed up to somebody above you.

This also applies to the “upsells” too. The only difference is that if you directly recruit somebody who makes a Platinum sale & you’re also a Platinum member, $50 of their sale will be passed up to you.

Is Lead Lightning a Scam? My Final Thoughts

Well, ultimately this depends on your definition of a scam.

I firmly believe that if you join the Lead Lightning program you will probably just find yourself spending more money on purchasing things inside of the program & promoting it than you will ever manage to earn back.

Plus, in order to get the full potential out of the affiliate program, you will be required to spend well over $500+.

Should you have to pay $500+ just for the privilege of promoting something? No way! Being an affiliate should be free because by promoting the program/product/service you’re already helping the owner.

If a program ever charges to participate in the affiliate program then I’d think twice about joining. It sounds suspicious.

So overall it’s safe to say that I’m not going to be recommending the Lead Lightning marketing system because I believe that if you join you’ll just end up losing money.

Instead, if you have a business opportunity that you want to promote, or if you don’t but you want to learn how to start an online business I would simply advise that you just go through the training over at Commission Academy.

You don’t need the “help” of a gimmicky system like Lead Lightning, you just need proper training & tools like those found at Commission Academy.

It’s there that you’ll learn how to effectively market things online & generate a sustainable stream of traffic that you can leverage to promote pretty much anything you can think of.

And unlike Lead Lightning which has a few questionable screenshotted testimonials, at least Commission Academy has been backed by genuine, proven success stories – like my own here.

But ultimately it’s up to you what you decide to do & either way, I just hope that my review of Lead Lightning here has given you a good insight into how the whole thing really works.

If you have any further questions or comments then don’t hesitate to leave them below. 🙂