The Max Daily Profits program which has been put together by two guys named Mark Barrett & Paul Prissick promises to provide you with a method that could see you earning up to $468.97 per month passively online, simply by giving something away for free. 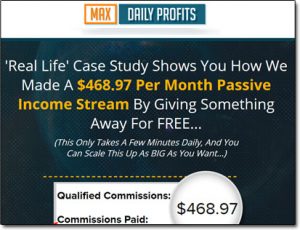 But is it actually legit or is Max Daily Profits a scam that’ll just leave you disappointed rather than rich?

Thankfully you’ve landed in the right place to find out because I’ve taken a closer look into this program to find out what it’s all about & in this review, I’m going to be uncovering everything there is you need to know, including most importantly whether or not you can really make money with it.

What Is Max Daily Profits?

The Max Daily Profits program sold through WarriorPlus is a money-making training course that can supposedly (according to its creators Mark & Paul) see you earning a passive income of over $468.97 per month.

You’re told that you don’t need any products to make money with it, you don’t need experience & apparently you don’t even need a marketing budget. The guys behind it claim it’s based on a brand new method that will work for years to come & that you can leverage it even if you’ve never made a penny online before…

However whilst the website for the Max Daily Profits program does a good job at telling you what the program doesn’t involve, as you’ve probably noticed it doesn’t really go into detail about what it does actually involve.

That’s something that’s kinda typical with products sold through WarriorPlus – I’m not sure why they do it but I think you’ll agree it’s pretty frustrating. After all, you want to know what you’re buying before you buy something right?

So how exactly does Max Daily Profits work? Let’s take a look…

How Does Max Daily Profits Work?

Essentially Max Daily Profits is just an affiliate marketing training program – and whilst they claim to provide you with a “brand new method” in all honesty the method isn’t really brand new at all.

I mean sure, the method works, but it’s not going to be as simple as they make out & the method as a whole is hardly anything surprising. Basically they just instruct you on how you can set up your own affiliate website where you will sell members in on a free trial who will then be charged a monthly fee if they decide to stick around.

The concept is simple, and it certainly works… But it’s hardly anything revolutionary.

On top of that whilst the program might seem cheap at just $17, unfortunately, this doesn’t get you access to everything. Instead after going through the training, you’ll find that you’ll be sold on their “website building package” which will set you back an additional $97/month. This basically consists of a web hosting, an auto-responder & webpage creator.

For another additional $27 they say they’ll also set you up with a high converting capture page too. This will be used to collect email addresses of potentially interested people so that you can follow up with them later & persuade them to sign up to your site if they didn’t initially.

So yeah despite them specifying that you can get started with this program on a small budget it’s clear that the costs can add up pretty quickly. I’m not saying the tools aren’t necessary, but as with everything it would have been nice if all the costs involved were explained upfront.

The one thing I did like about it though is that the program teaches free traffic-getting methods – this is pretty cool. I’m fed up of seeing programs pushing newbies into purchasing paid traffic because as far as I’m concerned free traffic is always the best way to start out & test the water… This way you don’t end up putting your money at risk if you happen to get it wrong.

I’m not saying paid traffic is bad, but I just feel it’s better to learn the ropes with free traffic first… Then move into paid traffic. The methods taught by the Max Daily Profits program might not go into the greatest detail ever but for a mere $17 the quality of the training isn’t too bad.

And this brings me right onto…

Is Max Daily Profits a Scam?

It would be wrong of me to call this is a scam because Mark Barrett & Paul Prissick the creators of this program have actually bundled together some valuable training inside this program… It does give you a good little insight into affiliate marketing but in my opinion, it’s just a shame that they built up so much hype on the sales page because as far as I’m concerned it’s pretty misleading.

I mean sure, you could indeed make money as a result of following the method that they teach you but there are 2 problems… Firstly it is going to take a lot more work than they make out, and secondly, the training is pretty brief so it is unlikely that you’ll see yourself generating anywhere near the promised income of $468.97 per month with this training alone.

There are 2 plus points though, I mean firstly it’s cheap – at only $17 to get access to it I’m sure it’s not really going to break the bank, and secondly if you are not satisfied they do offer a 30-day money-back guarantee. It’s certainly not like any of the typical get-rich-quick money-making scams I expose anyway… At least these guys have actually gone to some effort to try & give you something decent.

Overall the program is not bad, but I am not going to recommending it simply because I feel that if you do sign up to it you’ll only end up disappointed & asking for your money back since they’ve made the sales page so hyped up. In my opinion, there are better programs out there, like Commission Academy for example.

Anyway, hopefully, this review gave you the insight you were looking for into this program but if you do happen to have any further comments or questions on it then don’t hesitate to leave them below.