myBitcoinTube is a newly launched website which promises to provide people with a way to advertise & earn Bitcoin at the same time. 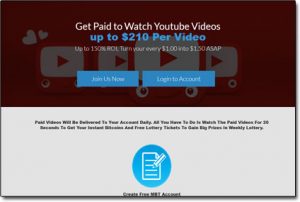 You’re led to believe that you can earn as much as $210 for every 20 seconds worth of video you watch… But obviously that’s a pretty bold claim, so is it actually legit?

Or is myBitcoinTube a scam to avoid?

Well as you probably already know, nothing in life comes that easy & myBitcoinTube isn’t really being entirely honest about how it all works.

Thankfully though you’ve come here to this myBitcoinTube review before joining in which I’ll be exposing the truth so you can see how it really works before signing up.

myBitcoinTube essentially portrays itself as being a new & upcoming video platform similar to YouTube but based around Bitcoin. It claims that not only can you watch videos & advertise, but you can even earn money too…

And unlike other sites like YouTube where you actually have to create videos in order to make money, myBitcoinTube claims that on their website all you need to do is watch videos & that you can earn up to $210 for every 20 seconds worth of video watched.

But $210 for every 20 seconds worth of video would equate to earning $630 per minute or $37,800 per hour which I think you’ll agree sounds like a pretty ludicrous claim.

Who on earth would pay you $37,800 per hour just to watch videos? Sounds fishy right?

And that’s because it is fishy…

The truth is that myBitcoinTube is actually just an investment scheme & it’s a scheme that will be much more likely to see you losing money as opposed to actually making it. It’s just geared towards making its creators wealthy at your expense.

So you’re led to believe that myBitcoinTube is a platform through which you can advertise & earn but in reality, it’s not – it’s just a Bitcoin investment scheme & the whole “advertising” thing is merely a cover-up for what’s really going on.

Literally the only money coming into myBitcoinTube is coming from the new investors that sign up – and this is the same money that’s getting paid out to members in the form of “ROI” by watching videos.

The problem here though is that if new people stop signing up, money stops coming into the company & people stop getting paid.

This might not initially sound like too much of a problem but lets, for example, say that you had just signed up to myBitcoinTube & invested $100 in the hope of getting a guaranteed ROI of 150% like they promise.

If people stop signing up after you deposit then you will simply lose that money because there will be more money coming into the company to pay out any of the existing members.

These things are made to seem great but they’re extremely risky – and that’s why they’re actually illegal (which is the reason that the creator has come up with a “cover-up” story to hide what’s really going on).

And if we take a look at the Google Trends graph of the popularity of myBitcoinTube then you can see just how risky it is:

The website could lose interest at any moment in time (as these types of sites do) and all those who had money invested would simply lose it. These things are geared towards making their creators’ wealthy – that’s all.

You see as soon as the website stops getting interest the creator will simply change it around a little & relaunch it again under a different name. I’ve exposed so many of these systems already in the past.

The “Real” Money Comes From Recruiting

You should also be aware that most of the people who promote the schemes like myBitcoinTube are not actually making money from the program itself – instead, they’re merely making money by recruiting others.

So if you sign up & invest via their link, they get paid a commission… They’re not really risking their money in the platform like they’re encouraging you to do… They’re just making money at your expense.

But even though you can promote myBitcoinTube to others & earn money that way I still wouldn’t recommend doing it because not only are you promoting a scam to people but there are also other much higher-paying affiliate programs that you can promote.

You can get access to a whole bunch of those high-paying affiliate programs through Commission Academy so if you’re interested in actually making money online legitimately then I’d definitely advise you check Wealthy Affiliate out.

My Verdict – Is myBitcoinTube a Scam?

myBitcoinTube is more of a scheme than a scam but it is something that’ll just likely result in you losing money all the same & for that reason, I am certainly not going to recommend that you join it.

The whole thing is reliant on new members coming in & investing & it’s that money from new investors that they’re using to pay out existing members which basically means that it’s nothing more than a pyramid scheme.

Pyramid schemes are of course illegal & as I mentioned earlier in this review they are just geared towards making their creators wealthy, not the actual members that participate in them. Most people who join just end up losing money instead.

If you really want to make good money online I would advise you steer clear of gimmicky systems like myBitcoinTube & instead just stick with one of the proven methods from my top picks page right here.

Or alternatively, like I mentioned in the previous section of this review you could check out Commission Academy which is one of my all-time top recommended programs for people looking to get started online.

Whatever you decide to do though I just sincerely hope that my review of myBitcoinTube here has given you a good insight into how the whole thing really works & hopefully it has helped prevent you from losing any money to it.

If you still happen to have any further questions or comments about it though then, of course, don’t hesitate to leave them below & I’ll get back to you as soon as possible. 🙂