Trunited claims to be a socialized commerce website & claims it can help you earn extra money by shopping online through the Trunited website or by sharing the Trunited opportunity with your friends. 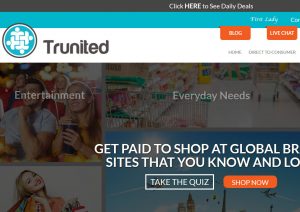 Some people have even claimed to be making around $5,000+ per month from Trunited which has lead to many people questioning its legitimacy. So, what’s the truth?

Is it actually legit or is Trunited a scam?

I’ve taken a closer look & I’m going to be revealing all the details here in this honest Trunited review.

Trunited is basically a cashback website, which means by using their service you can earn rewards for shopping online – all you need to do is access the stores you’d like to shop at through the Trunited website as opposing to visiting them directly & you’ll be provided with various rewards for each of your purchases.

The reason they’re able to pay you these rewards is that they’re affiliated with all of the companies that are listed on their site – so basically when you shop via theirs links they get paid a commission & they pass a part of this commission down to you in the form of rewards.

The rewards are paid to you in what Trunited call “Profit Points” – these points basically accrue in your account as you shop & can later be redeemed for cash or gift cards once you reach a certain threshold.

Some of the offers I’ve seen listed on their website pay up to as much as 70% in Profit Points, but typically on your “normal shop” (shopping at the websites you would usually visit without using Trunited) the average you’ll expect to see is around 2% to 10% unless you’re specifically going out of your way to chase the best deals.

It’s still not too bad though I think you’ll agree.

However technically you can’t make money with this part of Trunited’s program, you can only save money – but alongside this cashback scheme Trunited does also offer another opportunity through which you can earn some money too…

Over the past year, Trunited has seen some pretty solid growth & the reason for that is because attached to their cashback scheme they also offer a network marketing style business opportunity through which you can earn money by referring other people to the website.

Now usually I’m totally against network marketing companies because 9 times out of 10 they’re generally nothing more than well-disguised pyramid schemes, however, in the case of Trunited it’s not actually all that bad.

Theoretically, this compensation plan could be quite lucrative, but sadly most of the people that join Trunited won’t go on to refer other people or if they do they will only refer a handful of people & not really enough to make you kind of substantial income.

On top of that, whilst Trunited does actually provide a fairly good cashback service sadly many of the people who join never really get round to using it – so you’ll find that even though you might refer a lot of people very few of them will actually become properly active.

So whilst the opportunity sounds good in theory sadly it’s not quite as good in practice.

I do believe that there probably will be some people earning as much as $5,000 per month from this opportunity but I suspect that these people will have gotten in early & will have had some sort of platform (such as a shopping blog) through which they could quickly recruit a lot of people.

The chances are that if you join the opportunity now then whilst you can definitely make some money, I think that the money you’ll see as a result of promoting Trunited probably won’t be all that great.

Maybe a few dollars extra per month or a couple of hundred if you really work on heavily promoting it – but I wouldn’t expect to see anything life-changing from it because I think that ship has sailed.

But after personally looking into it I don’t believe it’s a scam – it seems to be a legitimate company that does what they say they do, reward you for shopping online via their website.

In terms of the cashback side of things, I think there are better alternatives out there with one of them being the Ibotta App (if you have a smartphone) – but if you feel like you have a lot of friends who may be interested in also earning cashback then the Trunited referral opportunity may prove to be fairly lucrative for you (though probably won’t provide you with any life-changing income as many of the other members promoting it might promise).

At the end of the day though it’s free to join which means that ultimately there isn’t really any risk in trying it out – so I think in this instance it’s just a case of “giving it a go” & trying it out to see how much you’re able to earn on your monthly shop.

So overall it’s a thumbs up for Trunited for me – and it’s probably one of the first network marketing style companies I’ve actually recommended because in this instance you’re not being forced into buying junk products that you don’t really need like you are with many of the other MLM style companies (which in my opinion are borderline pyramid schemes).