5 Figure Day is a website which claims to give you access to some new “traffic forwarding” technology that will allegedly see you building a profitable email list much faster than other ordinary methods. 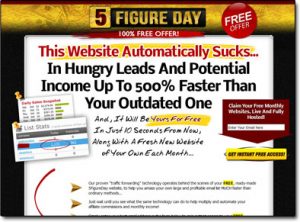 You’re led to believe that the same technology can apparently also multiply & automate your affiliate commissions too..

But is it actually legit or is 5 Figure Day a scam that’ll just end up costing you money instead?

Thankfully you’ve landed in the right place to find out because I’ve taken a look into it all & in this review, I’ll be uncovering everything you need to know, including how it all works & whether or not it really lives up to its claims…

What Is 5 Figure Day?

5 Figure Day is a program that’s been put together by a guy named Bryan Winters & it claims it can help you build a profitable email list faster than ever whilst also being able to make good money at the very same time.

You’re led to believe that as a member you’ll be provided with a brand new website each month & that the website will “suck in” hungry leads & potential income up to 500% faster than an ordinary one.

Bryan even claims that the technology can automate your monthly income…

But as you’ll soon see when I explain how it all works things are not quite as great as they seem – in fact, to be honest the whole thing, in my opinion, is actually pretty much just a borderline pyramid scheme…

How Does 5 Figure Day Work?

So the first thing I want to point out is that the 5 Figure Day system isn’t really free like it makes out to be… Yes, you can potentially get a “peek” inside for free, but ultimately it costs $7 for a 7-day trial & then $97 per month after that…

But anyway, basically once you’re inside that’s when you get to find out how it all really works, and it essentially just involves promoting the 5 Figure Day program onto other people & getting them to sign up.

You’ll either send people directly to the main website, or you can choose from alternative lead capture pages inside the members’ area… And a new one is allegedly added every month.

So basically when somebody lands on the capture page that you’ve sent them too, if they enter their email they get added to your list – and if they then go on to buy into 5 Figure Day, you earn a commission.

Though there is a bit of a catch… Because you don’t actually get the first 5 leads you generate… Instead, these get passed up to the person above you as part of their “traffic forwarding system”, but I’ll explain more about this in a moment.

Are There Actually Any Products?

Well to be honest, not really – that’s why I mentioned above that in my opinion the whole thing closely resembles a pyramid scheme, because it’s just about recruiting others in the exact same thing.

I mean inside the members you do get a little bit of traffic training (if you could really call it that), and you do get access to some capture pages… But these are not exactly things I would class as being products.

The reason I wouldn’t class them as products is that if they were sold outside of the opportunity then they would be pretty useless… It’s obvious the real focus here is just on recruiting & making money.

So Can You Make Any Money With It?

The truth is that yes, you could potentially make money with it – but in all honesty, it’s unlikely that you will. You’ll probably just end up spending more money than you ever actually manage to make back.

The reason for that is because finding success with the 5 Figure Day system relies on generating a lot of traffic & recruiting a lot of new members, but honestly, their traffic training is very poor.

They push you into using something called solo-ads to generate traffic which as far as I’m concerned is a very bad way to get traffic – plus it’s a way that will require you spending even more money.

And on the topic of spending more money, you’ll also have to sign up to an email marketing provider like AWeber or GetReponse too because the 5 Figure Day system itself doesn’t give you any way to actually follow up with your leads… They just save them into your account for you to download & transfer elsewhere (unless you link up an external provider).

So yeah… Not really that great…

Then There’s The Traffic Forwarding System…

You’re led to believe that the 5 Figure Day traffic forwarding system is going to help you build a huge list super fast & generate you a ton of commissions but in reality, it’s not actually all that exciting.

So how does it work?

Well basically when you sign up & start promoting the 5 Figure Day system (which I don’t recommend you do), the first 5 leads you generate will be passed up the person that referred you to the place.

So you’ll get nothing for your 5 first leads…

However, you’re led to believe that this will work in your favour because now if you anybody you recruit goes on to generate leads, you’ll get their first 5 leads passed up to you through the system.

Bryan claims this will help you build your list 5x faster than ordinary methods.

And whilst I admit that it might sound good in theory, in practice, it’s not really that great because it relies on everybody you recruit also going on to promote the 5 Figure Day system just like you.

Sounds way too risky to me, which brings me onto…

Well I guess it’s not really a scam as such, but it’s pretty misleading (or should I say over-hyped) and the truth is that you likely won’t make money or build your email list as fast as the 5 Figure Day system claims you will.

In fact, the truth is you could and probably will just send up spending more money on the whole thing than you actually ever manage to make. Not to mention the fact that it’s borderline a pyramid scheme.

I mean there’s no real product, the whole things focused around commissions & in order to earn money you’re required to get people to sign up & invest in the exact same thing that you did.

Sounds way too risky to me & for that reason, I won’t be recommending it to you. If you really want to learn how to build an income online or grow an email list then I’d suggest a legitimate program like Commission Academy instead. It’s there that you’ll get the proper training & tools you need – without the expensive cost associated with things like the 5 Figure Day system.

But anyway hopefully my review here gave you the insight into this program that you were looking for. If there is still something you’d like to ask though then don’t hesitate to leave your questions or comments below & I’ll get back to you as soon as possible.