As an affiliate marketer, I’m always looking for ways to make my life easier & my business more profitable… And one of my recent discoveries was a program named AffiliBuilder. 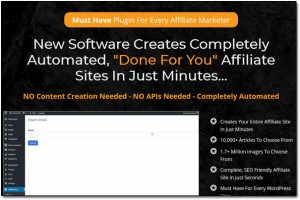 AffiliBuilder calls itself an “affiliate site builder” and it claims that it can create completely automated done-for-you affiliate websites within just a matter of minutes.

All you allegedly need to do is simply enter your chosen keywords & then the AffiliBuilder plugin will get to work on creating so-called SEO friendly content, entirely on your behalf.

The content will then get ranked in the likes of Google (allegedly) & you’ll be able to sit back & watch the profits begin to come rolling in as the visitors to the site begin purchasing products via your links.

And I think you’ll agree, it almost sounds like a dream, right? An opportunity to make money with no work whatsoever.

But sadly, that’s because it is a dream. In this AffiliBuilder review, I’ll be uncovering how it really works & why you won’t really find yourself making money like its creator, Kurt Chrisler, claims you will.

The website promoting AffiliBuilder almost portrays it as being some sort of entirely “done-for-you” solution for making money online, but that’s far from what it is.

In reality, AffilBuilder is actually just a WordPress plugin.

This means that in order to actually be able to use AffiliBuilder, you need to already have a WordPress website (and a domain name, and web-hosting too).

If you don’t already have those, you can learn how to set up a WordPress website for free in my guide here.

But yeah, basically AffiliBuilder is just a content creation plugin… Nothing more.

So the idea is that to save you from having to spend time creating your own content for your website, you can install AffiliBuilder & have it generate automated content entirely on your behalf.

You’re told that all you need to do is enter the keywords you’d like the article to target & that the plugin will then provide you with over 10,000 pieces of content to choose from.

And you’re then led to believe that these articles will become ranked in search engines like Yahoo, Google & Bing so that you can begin receiving traffic to your websites.

Well, unfortunately, the short answer is no – because the content that is generated by AffiliBuilder is just what’s known as “spun content” that has been copied from other websites.

Search engines don’t like this type of content & they rarely even index it, let alone “rank” it… But even if they did, there’s another problem which I’ll touch on in the next section below.

Credit where it’s due, the AffiliBuilder plugin is a pretty simple plugin to use… And it does indeed create content as it promises to do on its promotional page.

All you need to do to use it is simply install it to WordPress (by uploading the .zip archive that you’re provided with after purchase) & then “activate” it from the plugins page.

Once activated, you’ll be able to navigate to the AffiliBuilder page & on this page, you’re given the option to “import an article”.

To import one, you need to start by entering a keyword, then you’ll be shown results from AffiliBuilder’s database of over 10,000+ pre-generated articles. 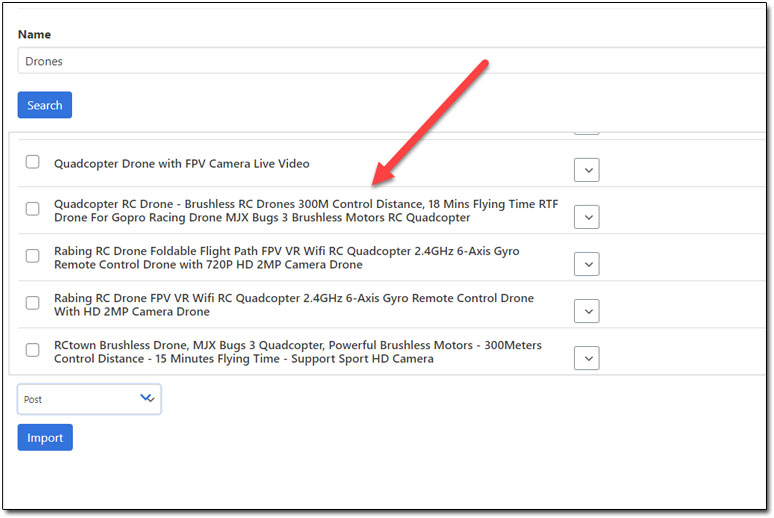 The immediate downside here, however, is that these are all the exact same articles that every other member of AffiliBuilder gets access to.

That aside, once you’ve found an article you like you can click “import” and the article will then be published on your site automatically, with the idea being that it’ll get ranked in search engines & begin generating traffic.

The problem, however, is that it won’t.

And the reason for that is because as I mentioned in the previous section of this AffiliBuilder review, the content you’re provided with is just “spun content” which has been copied from other websites.

This means that the content has been copied (or should I say stolen) & then the creator of Affilibuilder has used a robot (known as a spinner) to change a few words around to try to hide the fact that it’s been stolen.

And naturally, search engines HATE this kind of content. It’s extremely rare that they even bother to index it, let alone rank it high enough for you to actually get traffic.

But that’s not the only issue here… Because even if you did begin getting traffic (which I can assure you, you won’t), you still won’t find yourself actually making any sales.

The reason for that is because the content that’s produced by the AffiliBuilder isn’t readable by humans, since all the words have been switched around.

Here’s a quick example of that:

This means that even if somebody did happen to click to the article, they would just immediately click away from it again when they discover that it’s all mumble-jumble.

So these things may sound good in theory, but ultimately after purchasing them you’ll just be left to find yourself disappointed with the results that they actually produce.

The reality is that there is no (and never will be any) way to sustainably earn good money without putting in any work whatsoever. The sooner you learn that the sooner you’ll start actually earning.

Success takes work, there are no 2 ways about it.

The creators of things like AffiliBuilder just prey on the fact that there’ll always be people trying to seek out that “easy option”, and they just cash in at their expense.

The AffiliBuilder plugin costs $19.95, which isn’t the largest sum of money in the world lose… But at the same time, I’m pretty sure you’d rather hold onto that $19.95 than waste it.

And remember, that’s just for the plugin.

If you want to actually use the plugin then you’ll need a domain name & a WordPress website, which will require web-hosting… That all comes at a cost.

(unless you check out my guide on how to build a WordPress website for free, that is). 😉

I think it would be wrong of me to call AffiliBuilder a scam. I mean sure, the sales page is misleading & I wouldn’t recommend the plugin, but ultimately it does produce content as promised (albeit that it’s not that great).

So is AffiliBuilder a scam? No, it’s not – but at the same time, it’s not something that’s going to see you automating your business as it claims to be able to help you do, either.

It’s just a very basic plugin that enables you to search for pre-spun articles & publish them directly to your WordPress website. That really is the be-all & end-all of it.

Therefore, with that in mind, it’s safe to say that I won’t be recommending the AffiliBuilder plugin to you.

Instead, if you truly want to learn how to make money with affiliate marketing properly then I’d simply recommend that you check out my own free step-by-step guide right here.

Or alternatively, leverage a proven training platform like Commission Academy rather than seeking for gimmicky ways to make money without putting in work (which don’t exist).

But whatever you decide to do I sincerely hope that my honest AffiliBuilder review here has given you a good insight into how the whole thing actually works & what you can expect from it.

If you still happen to have any questions or comments then, of course, don’t hesitate to leave them below. As always I’ll do my best to respond back as quickly as I can.