The Bitcoin South African System software claims to provide an “automated approach to generating a fortune in Bitcoin” & you’re basically led to believe that’ll it earn you money without you having to actually do anything. 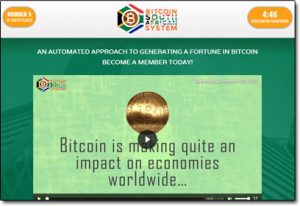 The person behind it (who suspiciously remains anonymous) claims that all you need to do is sign up, make a small deposit with the recommended broker & then activate the system to begin profiting…

But is it actually legit? Or is the Bitcoin South African System a scam that you should just avoid?

Well, I’m really glad that you asked the question before signing up to it & decided to come here to this review first because as you’ll soon see the whole thing is NOT what it seems & it’ll just end up making you lose money as opposed to helping you make it.

What Exactly Is The Bitcoin South African System?

Basically the Bitcoin South African System claims to be an automated trading system which can allegedly trade Bitcoin profitably entirely on your behalf, even if you don’t know the first thing about trading.

You’re literally led to believe that you can simply just sign up, make a deposit with the broker that they recommend & then activate the software in order for it begin making you money all on complete autopilot.

And if that on its own doesn’t sound good enough, the creator (who remains anonymous) even claims that the system can earn you thousands of dollars per day all without you having to lift so much as a single finger.

But there’s one big problem… Which is that the whole thing simply sounds WAY too good to be true. It sounds like a typical get-rich-quick scam & no doubt you’re wondering about its legitimacy as a result?

I mean think about it – if the Bitcoin South African System software really worked as promised then why on earth isn’t everybody using it?

Why are people still working at jobs that they dislike if they can simply sign up to a “free” system and earn more money than they do at their jobs from home without actually having to do anything?

Well, the reason is because, in reality, the Bitcoin South African System is nothing but a scam & I can say that so confidently because I’ve actually seen this exact same scam several times before under various different names.

The person who’s behind it simply keeps on changing its name in an attempt to escape the negative reviews that expose the truth about it (like this one) and continue tricking more people into signing up.

Some of its previous names include Brexit Trader, The Britcoin System & the Bitcoin Aussie System…

How Does The Bitcoin South African System Work?

So you’re told by the Bitcoin South African System website that all you need to do is simply sign up for free, make a deposit with the broker that they recommend & then activate the system in order to begin making money.

It certainly sounds good in theory, but there’s something VERY important that they don’t tell you…

That important thing is the fact that the creator of the Bitcoin South African System is actually affiliated with the broker that you’re recommended to deposit with – which means when you deposit, they get paid a commission.

And the broker that you’re recommended to deposit with is what’s known as a binary options broker which is a HUGE red flag.

So for example through a binary options broker, you would place a bet on whether you think the value of Bitcoin would go up or down over a set time period (which is usually under 60 seconds).

If you guess right, you get your money back plus a small bonus… But if you guess wrong, the broker takes everything.

And here’s the deal – if you win, then the binary options broker has to pay you that bonus out of their own money (since you simply placed a bet with them) which means they absolutely do not want you to win.

So with that in mind, ask yourself this… Why would a binary options broker (who only makes money when you lose money) want to pay commissions to the creator of a system (the Bitcoin South African System) which could supposedly generate you guaranteed profits?

They wouldn’t – no way, because such a system would put them out of business.

The real reason they’re paying commissions to the creator of the Bitcoin South African System is because they know that the system isn’t really designed to help you make money at all. It’s designed to make you LOSE money.

So basically the broker & the creator of the Bitcoin South African System software are both in cahoots to scam you out of your hard-earned money & that’s why the creator has chosen to remain anonymous.

But The Real Scam Only Starts With The Deposit…

But that’s not the case.

Instead, the scam is actually much more cunning than that & the creator of the Bitcoin South African System has actually put together a fake trading system to trick you into making even more deposits.

So after depositing via the broker (which I don’t recommend doing), you will indeed get access to a piece of online “trading software” as promised & it will appear that you’re actually making money.

Unfortunately, you’ll only be left to finally discover the whole thing is a con when you push to make a withdrawal & realize it never gets processed.

The broker will either refuse the withdrawal, ignore it – or sometimes they will even ask you for more cash to “release the withdrawal” which of course is just yet another further part of the scam.

In short, the entire thing is bad news, which brings me onto…

My Verdict – Is The Bitcoin South African System a Scam?

There’s absolutely no doubt about it whatsoever, the Bitcoin South African System is most certainly a scam & it’s specially designed to scam those that are residing in South Africa.

The whole thing is fake – it’s all just a ploy to trick you into depositing with an unlicensed binary options broker so that both the broker & the creator of the Bitcoin South African system software can profit at your expense.

Like I mentioned at the beginning of this review I’ve already seen this exact same scam launched under several different names such as Brexit Trader, The Britcoin System & the Bitcoin Aussie System.

But it’s safe to say I don’t recommend joining the Bitcoin South African System – instead, you should avoid it & if you really want to make money online I would suggest you stick with a proven method from my top picks page.

You can also learn about the same way I personally make money online too right here.

But whatever you decide to do I just sincerely hope that my review of the Bitcoin South African System here has given you a good insight into how it really works & most importantly I hope it helped to prevent you from getting caught out by it.