No that’s not a typo – the Britcoin System (yes BRITcoin) is a brand new system that claims it can enable people in Britain (even total newbies) to generate massive profits from Bitcoin by making automated trades on their behalf. 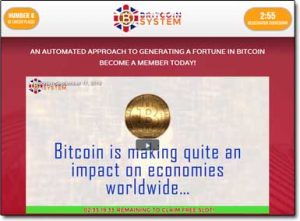 The whole thing literally leads you into believing that you’ll just be able to sign up & make tons of money without actually having to do anything, and without requiring any knowledge of cryptocurrency…

But is it really legit, or is the Britcoin System a scam that’ll just end up costing you money rather than helping you to make it?

Thankfully you’ve landed in exactly the right place to find out as I’ve taken a closer look into the whole thing & in this review, I’ll be sharing the honest truth about how it all really works & whether or not you can really make money with it as they promise.

What Is The Britcoin System?

The Britcoin System portrays itself as an automated Bitcoin system, and even though that Bitcoin is currently crashing in value (and has been for several months), the Britcoin System interestingly states that it can still enable you to profit from the drop, as well as the rise.

The way it allegedly does that is through something which is known as binary options trading, and the first thing I want to immediately point out is that binary options trading is extremely risky. So risky in fact that even Forbes published an article warning about the dangers (as shown below):

The reason it’s so risky is that when it comes to binary options trading, you’re not actually purchasing whatever it is you’re trading – which in this instance with this system is Bitcoin.

Instead of purchasing it, then holding onto it & selling when the value increases (like normal trading), you are basically placing bets with a broker on whether or not you think the value will increase or decrease in a certain time period.

Now if the time period was any reasonable length of time – for example, if they said you can bet whether Bitcoin would rise or fall by the end of the week, then obviously you’d likely stand a chance of profiting… But that doesn’t happen. Binary options “bets” are typically made over seconds – with most brokers making 60 seconds the longest period of time for their users to bet over.

In such short spaces of time, there is simply NO way you could predict what is going to happen due to the insane amount of minor fluctuations – and as a result, that’s why most people who get into binary options lose money. It seems easy, but in reality, it’s massively difficult.

In fact, many people, including myself have even come out to call binary options trading a flat out scam altogether.

But where does the Britcoin System come into place I hear you ask? Well, don’t worry, all that will be explained below…

How Does The Britcoin System Work?

So the concept is that the person who has created the Britcoin System has come up with a “secret” algorithm that can accurately detect trends in the cryptocurrency marketplace & as a result, it can allegedly determine whether or not the price of Bitcoin will go up or down… Automatically.

The first thing I’ll say is that it’s absolutely not true (as you’ll see in a moment)… But basically the creators want you to believe that you’ll be able to simply sign up, make a deposit & that the system will begin making profitable trades for you on your behalf.

However the whole thing is actually a massive scam – and the reason I can say that so confidently is that I’ve seen this exact same type of scam launched several times before under various different names.

Just this week alone I exposed it under the name of the Bitcoin Profit system & the Bitcoin Revolution system – and prior to that, it’s been launched under many more. The reason they keep changing their name so frequently is merely to try & escape the negative reviews so that they can continue parting people with their hard-earned cash.

In short, the whole thing is basically a ploy to get you to make a deposit with the broker that the creator of the Britcoin System is affiliated with so that he (or she) can earn a commission at your expense.

That’s why you’re forced to make a deposit via a “recommended” broker before you can get access to the system… But the truth is that the broker you’re “recommended” is also in on the scam as well.

So after making the deposit (which I absolutely don’t recommend doing) you’ll just be left to find out the hard way that the system doesn’t really work as promised. Yes, it will make trades on your behalf, but none of them will be profitable… It’s not really built around any “secret” algorithm – it just trades at complete random and as a result, it will just generate nothing but losses.

Even if you’re lucky enough to stop the system from trading before it burns through all your money there’s still a big problem – which is the fact that the broker is in on the whole thing too. This means that even if you have funds remaining in your account the broker will make them extremely difficult (nearly impossible) for you to withdraw back out.

Thankfully there are now companies like MyChargeBack who are helping people get their money back from these crooks – but obviously the best thing is to simply never have deposited in the first place.

Don’t Fall For The Trap!

The reason these bogus binary options systems catch so many people out is because they make the whole thing seem almost risk-free. What you don’t realize is that the broker is in on it too.

You see you’re led to believe that you’ll be able to make a deposit, try out the system, and that if it doesn’t work as promised you will naturally think that you’ll just be able to withdraw your money.

Sadly that’s where the scam lies – and that’s the trap – once your money is in, it’s in!

From there, as I mentioned above, the people behind these scams (including the brokers) will make it almost impossible for you to get your money back. The tale I recently posted of what a binary options scam did to this mum & her kids really highlights the truth about these scammers.

Is The Britcoin System a Scam?

I can tell you with 100% certainty that the Britcoin System is a scam & you should definitely stay away from it. There’s no way it will really help you make money, all it will actually do is take money from you to make the creators richer at your expense.

The reason I know that for sure is because I have exposed literally hundreds of binary options scams prior to this one & I know exactly how they work. The Britcoin System itself is just a rehashed version of the Bitcoin Revolution scam that I mentioned at the start of this review – all they’ve done is change the name & the design of the page a little bit… The scam remains the same.

But the good news is that if you are actually prepared to put in the work then there are legitimate programs out there such as Wealthy Affiliate that will show you exactly what you need to do to get started.

Either way though whatever you decide to do I just hope that my review here has given you a good insight into how these binary options scams work & I also hope it helped you save your money. If you do still have any questions or comments about it then you can leave those below too & I’ll get back to you as soon as I can.