The brand new Brexit Trader system claims that Brexit is soaring the price of Bitcoin & that the “Brexit Trader software” can enable you to cash in on it & easily build up a huge Bitcoin fortune all on complete autopilot. 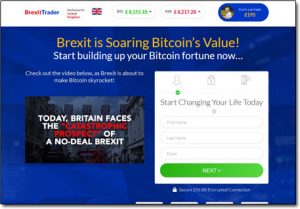 You’re led to believe by the software’s founder (who remains anonymous) that you don’t need any experience, that you only have to monitor it for a mere 15 minutes per day & that there are no costs involved other than a deposit to trade.

But it all just sounds a bit too good to be true don’t you think?

So what’s the truth – is the Brexit Trader legit or is it just a scam that’ll just end up seeing you getting suckered out of your hard-earned cash?

Well, you’ll be glad that you came to this Brexit Trader review before signing up because I can tell you right from the off that the Brexit Trader software is NOT what it seems and that it will only result in you losing money.

What Is Brexit Trader?

The Brexit Trader system basically portrays itself as being an entirely automated trading system which can allegedly see you “cashing in” and earning a fortune from Bitcoin without having to even do so much as lift a finger.

The person behind it (who worryingly remains anonymous) claims that the value of Bitcoin is soaring due to the whole Brexit goings-on & he claims that his system can enable you to make money from it, even if you don’t know the first thing about trading.

Is the value of Bitcoin really going up though? Well yes, it is – but it’s also going down as well… The price of Bitcoin is still extremely volatile & as far as I’m concerned there isn’t anybody (except somebody from the future) who can accurately predict which way it will go. 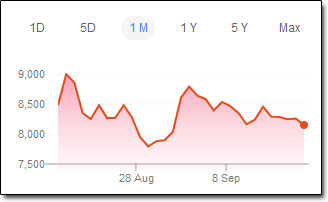 So the Brexit Trader making the claim that it will undoubtedly go up in value is extremely bold… However, the creator says that all in all it doesn’t actually matter which way it goes. He says you can still make money with his system even if the value goes down…

But how is that possible?

Well, the reason it’s “technically” possible is because the Brexit Trader is actually a system that’s built around something called binary options, which is a VERY dodgy area of “trading”.

I’ve quoted the word trading because it’s actually so risky that the UK regulatory body contemplated the decision to reclassify it as gambling rather than trading since the odds were stacked towards people losing as opposed to winning.

You see with binary options you don’t actually ever invest in anything, you simply place bets on whether you think the value of something will go up or down… Which may seem easy, however, because the time windows you bet over are so small (usually under 1 minute) there is no real way of telling which way things will go. It’s all down to pure chance.

And this is where it gets worse – if you guess right then you get your money back plus a bit of profit, but if you’re wrong then you lose everything. Hence why the odds are massively stacked against you.

However, the Brexit Trader system has supposedly been built to automate this process & allegedly has a “world-class 99.4% level of accuracy” so that you can guarantee profits on almost every single trade.

But is it true? Well, the short answer is no, it’s not.

How Does Brexit Trader Work?

So the concept is that you can simply sign up to the Brexit Trader website, deposit some money via their “recommended broker” & then access their software (which allegedly connects directly to the broker) in order to begin making automated profits.

The system claims that it has a “world-class 99.4% level of accuracy” which means you’d expect to be making profits on near enough every trade… But sadly in reality that’s not how the whole thing works.

There is one VERY important thing that the owner of the whole thing fails to tell you, and this is also the reason why the real owner keeps himself anonymous (because he knows the whole thing is just a scam).

So what is the important thing?

Well, it’s the fact that the creator of the Brexit Trader software is actually affiliated with the broker that he “recommends”… Which means when you sign up & deposit with the broker via his recommendation, the broker pays him a commission.

However, there is something else very important you have to realize here. Remember earlier in this review I mentioned the whole thing revolves around binary options trading? Well, binary options brokers do not add fees, instead, they only make money when you lose money.

So with that in mind ask yourself this – why would a binary options broker (who only makes money when you LOSE money) pay commissions to the creator of a system that can allegedly guarantee you to profit?

They wouldn’t, no way because doing so would put them straight out of business. The real reason they’re paying the Brexit Trader creator commissions is because they know it’s a fake, and they know that it’s actually designed to make you LOSE money, not earn it.

Sadly though you’re only left to discover that the hard way AFTER depositing your money with the broker – and then by that point the broker will make it nearly impossible for you to get your money back because they’re also in on the scam too.

Binary options brokers are BAD news. The whole industry is bad news. Even Forbes warned against it as shown below:

And just in case you’re still thinking about “trying it out” despite my advice above (which I know some of you, unfortunately, will be) then keep on reading and I’ll PROVE to you that it’s 100% a con.

I mean yes, the internet provides many great ways to make money but it’s not magical & none of them are going to see you getting rich without you having to do anything. That’s just a pipe-dream… It’ll never happen.

If you want to make good money online then you must be prepared to put in the work to make it happen. Thankfully though if you are prepared to do that then there are places like Commission Academy where you can learn how to get started properly.

Aside from that though there’s also the fact that the Brexit Trader website is identical to that of the Libra Method App website which is yet another binary options scam that I exposed just yesterday.

The creator has simply launched the system under multiple names so that he/she can attempt to escape the negative reviews that surface (like mine here) to continue tricking people into signing up to it.

That on its own should prove to you that it’s 100% a scam, but just in case it doesn’t you should also be made aware that the Brexit Trader system & Libra Method App system have both been promoted with bogus celebrity endorsements as highlighted below:

So if you came across the Brexit Trader software through some sort of “recommendation” by a celebrity then just know that the recommendation wasn’t real, it was just trickery put out by the scammers behind the system.

Is Brexit Trader a Scam?

Absolutely, the Brexit Trader system is definitely a scam & as I mentioned earlier in this review it’s just a re-hashed version of the Libra Method App scam that I previously exposed right on here on this blog.

The whole thing is just a ploy to trick you into making a deposit with an unregulated binary options broker than the person behind the Brexit Trader system is affiliated with (so that he can earn a commission at your expense).

Then after making your deposit, you’ll just be left to find out the hard way that it doesn’t really work as promised & you’ll also sadly be left to discover that the broker will make it next to impossible for you to get any of your money back.

The whole thing is a con & should just be well avoided. Instead, if you really want to make good money online then you should run with a proven method like affiliate marketing instead, which is the same way I make money online.

Yes, affiliate marketing takes work, however, it is well worth it because the amount you can earn is completely uncapped meaning that you can quite easily make a full-time income with it if you are willing to put in the effort.

You can learn more about it at Wealthy Affiliate, or alternatively you can check out these other ways to make money if affiliate marketing doesn’t interest you for one reason or another.

Whatever you decide to do though I just sincerely hope that my review of Brexit Trader here has given you a good insight into how it really works & I hope that it has helped you to save your money. Feel free to leave any further questions or comments below if you happen to have any. 🙂