Brexit Millionaire claims to be Britain’s most exclusive trading platform & it promises to provide you with an easy way to make guaranteed profits of up to £2,000 per day, all thanks to Brexit. 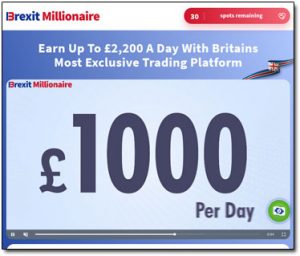 You’re led to believe that all you need to do is simply sign up, make a deposit & then “activate” the system in order to begin seeing automated profits starting to roll into your bank account.

But is it really legit? Or is Brexit Millionaire just a scam that you should avoid?

Well, the good news is that I’ve personally taken a closer look into it & in this honest Brexit Millionaire review I’m going to be uncovering everything you need to know (including whether or not it really works as promised).

What Is Brexit Millionaire?

Brexit Millionaire is a newly launched trading system that claims it can enable Britain’s to bounce back from Brexit & coronavirus & begin generating as much as £2,000 per day, all on complete autopilot.

What’s more, is that the website promoting the Brexit Millionaire trading system claims that the software can be used by both pros & beginners & that the whole thing is also 100% free of charge.

Could you really use the free Brexit Millionaire software to begin generating thousands of pounds per day without any risk like the website promoting it claims you can?

Well, unfortunately, the answer is no – you can’t.

You see, the Brexit Millionaire system is actually just a rehashed version of a scam that I previously exposed on this website named Brexit Trader.

The person behind it may have changed its name, but the scam remains exactly the same.

How Does Brexit Millionaire Work?

In short, Brexit Millionaire is what’s known as a binary options trading scam.

You see, the reality is that the trading platform doesn’t really work as promised & instead, the Brexit Millionaire website has just been designed to trick you into depositing with a binary options broker.

The reason for this is that when you deposit, the creator of the Brexit Millionaire scam gets paid a commission at your expense.

And let me tell you, binary options trading, in general, is very bad news.

In fact, it’s so bad that even Forbes published an article warning about the dangers of binary options trading:

You see, when it comes to binary options trading you don’t actually “invest” in anything as such. Instead, you simply place bets on whether you believe the value of something will rise or fall over a certain period of time.

And initially, this may sound like it could be fairly easy to profit with but because the time periods are so short (usually 60 seconds or less), the odds of you winning are next to none.

Statistically, you actually have a better chance of earning money at the roulette table. That’s how bad it is.

And because it’s so risky, the binary options brokers will do anything they can to get you to sign up… Including paying rogue affiliates commissions to create fake systems like Brexit Millionaire.

So basically, Brexit Millionaire is all just a ploy to trick you into believing that you’ll be able to make money because the creator knows if he can make you believe that, he can get you to make a deposit (and earn himself a commission).

But there is also a further trick to the scam because after making the deposit with the “recommended broker” you do actually get access to a trading system as promised by the Brexit Millionaire website.

And as promised, the trading system does actually appear to be making you profits.

But once again, all of this is completely fake too. The Brexit Millionaire trading system that you’re given access to isn’t actually connected to any live markets… It’s essentially just a video game & it’s simply designed to get you to deposit even more money.

When it comes to the Brexit Millionaire scam, there are a ton of red flags. The whole thing literally screams “scam”.

In the instance of the Brexit Millionaire trading platform, it definitely is.

And then on top of that, there’s the fact that the Brexit Millionaire displays a fake scarcity timer to rush you through the process of signing up – a tactic that’s commonly associated with scams.

For example, after sitting on the page for a few minutes you’re told that there are only “3 spots remaining” but after doing a quick refresh that number goes right back up to 43: 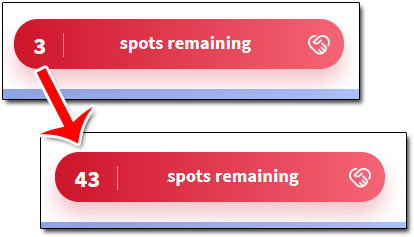 But alongside those 2 red flags, there’s also the fact that the Brexit Millionaire website displays absolutely no ownership information whatsoever. No names, no address… Nothing.

Would you really want to invest money via a website that displays no ownership information whatsoever?

And even if those red flags alone don’t bother you, there is still a much, much bigger red flag…

Perhaps the biggest red flag of all is the fact that the Brexit Millionaire scam displays several fake testimonials on its website in an attempt to trick you into believing that it’s actually legit.

But a quick search using Google’s Reverse Image Search tool reveals that the testimonials are completely fake as the images have just been pulled from stock photo websites.

And that brings me nicely onto my next point…

Is Brexit Millionaire a Scam?

Yes, without a doubt, Brexit Millionaire is 100% a scam. The entire system has been designed with the sole intention of tricking you into depositing money with a rogue binary options broker.

In short, you will NOT make money with Brexit Millionaire. You will just lose it.

As mentioned towards the beginning of this review, Brexit Millionaire is actually just a rehashed version of a previous scam.

It was formerly known as Brexit Trader & the creator has simply changed its name to escape the negative reviews in an attempt at tricking more people into signing up.

If you really want to earn money online then there are certainly legitimate ways to do it but Brexit Millionaire is not one of them. I’d recommend that you check out affiliate marketing instead.

Affiliate marketing simply involves connecting people with products or services online & getting paid commissions in return. It’s a very good way to earn money & best of all, anybody can do it.

You can learn more about it in my free guide here.

But whatever you decide to do, I just hope that you found this Brexit Millionaire review helpful & most importantly, I hope it has helped you to save some of your hard-earned cash.

If you happen to have any further questions or comments then don’t hesitate to leave them below.