Whilst I haven’t yet invested in cryptocurrency it’s something I’ve been heavily considering, especially with the hype surrounding Bitcoin at the moment. However, at the moment I’m trying to determine the safest & easiest way to invest. 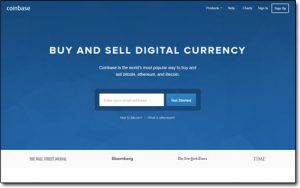 Which brings me onto today’s blog post – in which I’m going to be putting together a review of CoinBase, which is a company that lets you buy, sell & store various cryptocurrencies.

One thing I noticed was that there was a lot of CoinBase scam rumours circulating the web with people claiming all sorts of things like CoinBase not letting them withdraw, locking them out of their accounts & so on.

Therefore I’ve decided to take a closer look myself, since I have a personal interest in using CoinBase & in this review, I’m going to uncovering everything you need to know which means if you’ve also been considering using CoinBase like me then you can rest assured that you’ve landed in the right place to find out if it’s a wise move.

Whilst I don’t know the technical term for CoinBase (if there is one?) the best way I’d describe is as being a cryptocurrency marketplace. The site originally launched back in 2012 & the promising news is that they’re based in the USA.

At the present moment in time, they only work with 3 cryptocurrencies in particular which are Bitcoin, Etherium, and LiteCoin. You can buy/sell these through the site & you can also create a free wallet to store them in.

From what I’ve heard it can be risky storing coins in online wallets & therefore if you’re planning on doing that then I’d advise doing it with caution. A better solution is apparently to store them in an offline hardware wallet instead.

How Does CoinBase Work?

Unlike many of the other cryptocurrency marketplaces, CoinBase isn’t a peer to peer network which means you’re not buying the coins from somebody else, you’re buying them directly from CoinBase.

Just like a normal currency exchange CoinBase basically keeps track of the current market value of the coins & allow you to purchase (or sell) them for real-life money using a credit or debit card.

If you are frequently trading coins then rather than making individual purchases on your card each time you can actually create a US dollar wallet inside of CoinBase to store funds, but again I’d advise caution if you’re thinking about doing that because of potential security issues.

The good thing about CoinBase is that according to the majority of the users the currency you purchase is deposited into your wallet almost immediately. Some other sites from what I’ve heard have a rather long waiting period between you making the purchase & the currency actually getting deposited.

Once the currency is in your wallet you can then do whatever you like with it. The wallet you have at CoinBase has its own unique address which means you can send currency to it from elsewhere, or you can use CoinBase to send the currency from there to somewhere else.

Before You Can Begin Buying Cryptocurrency…

As I mentioned above CoinBase is located in the USA, which in my opinion is a good thing – this gives you some reassurance that the company must be operating legitimately as the USA has some very stringent laws when it comes to this sort of thing.

However one of those laws is that as a regulated financial service company CoinBase must ask all of its users for some sort of proof of identity before you can begin purchasing currency through their site.

This is quite normal when it comes to trading online but I just want to bring it to your attention as I know some people are still quite concerned about data protection & don’t like sending these types of things across the internet.

Once you’ve submitted the ID & it’s been verified by their team then you’ll be free to purchase currency as you please, though just so you know the first time you connect your debit/credit card CoinBase will make 2 small transactions to test its validity (which again is completely normal).

Well, when it comes to managing money online there is always going to be some degree of risk involved but it seems to me that CoinBase is actively doing their best to make sure that their website is as safe as possible.

CoinBase uses something called two-factor authentication which basically means that when you log in via the website you’ll be sent a code to your phone & you must enter the code to get access to your account.

This can seem like a bit of a pain but ultimately it’s there to protect your account as the idea is that in order for somebody else to get access to it they’d not only need your password, they’d need some way of accessing your phone too…

Which as you probably agree is quite unlikely… And you’d like to think that the people who could potentially get access to both would not be the type of people looking to scam you as chances are they’re your family/friends.

Is CoinBase a Scam?

I’m going to say that no, I definitely don’t believe CoinBase to be a scam – in fact out of all of the websites out there at the moment that gives you the ability to buy, sell & manage cryptocurrencies I’d probably say that CoinBase is one of the most legitimate.

I mean sure, there are people out there claiming that they’ve lost money through CoinBase but personally I don’t believe that CoinBase has intentionally scammed them, I think there’s been some other issue at play.

For example, a lot of people claim that CoinBase has locked them out of their accounts, but this is just because they have such a strict security process. If CoinBase detects anything unusual with the account then yes they will indeed lock it, but if you contact them then based on the reviews I’ve read they will generally resolve it & it seems they usually do it rather quickly.

And when people claim to have had their accounts emptied I think this is potentially they have been careless with their account details. At the end of the day, there will be a lot of people trying to break into user accounts to take their money so just like you would with online banking you should be extremely careful with your details & the devices that you use to access these sites.

I’ve seen several flat-out cryptocurrency scams such as Dascoin, & Xtreme Coin but CoinBase is definitely not one of them. It’s a legitimate website through which you can transact various cryptocurrencies.

Therefore overall it’s a thumbs up for CoinBase from me & if you’re looking at buying or selling (or even storing) cryptocurrencies then I’d definitely recommend it as a website for you to check out.