This morning I came across a website called Done 4 You Business which as the name suggests, promised to provide its visitors with access to their very own automated online biz. 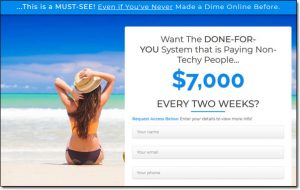 So as a visitor you’re led to believe that all you need to do is simply sign up, pay for advertising & that your profits will be pretty much guaranteed because everything’s already been “done-for-you”.

But there’s one issue, which is that if it’s so easy to earn money then why isn’t everybody doing this?

Why are people still working jobs if they can just launch an automated business that pays them $7,000 every 2 weeks?

The answer – because it’s not as easy as they make out… And it’s far from automated.

In fact, as you’ll soon see in this Done 4 You Business review, the truth is that the whole thing could just result in you losing as much as $21,847 (or even more).

What Is Done 4 You Business?

Done 4 You Business (located at the strange URL of cg20.logintosystem.com) is a website which promises to provide you with exactly that – access to a “done-for-you” online business.

The creators have allegedly built a “proven model” and if you hand over your cash to sign up they claim that they’ll give you a replica of the proven model so that you can earn money from it for yourself.

All you’ll need to do is pay for advertising, you’re told.

And here’s a screenshot of how they claim the business works: 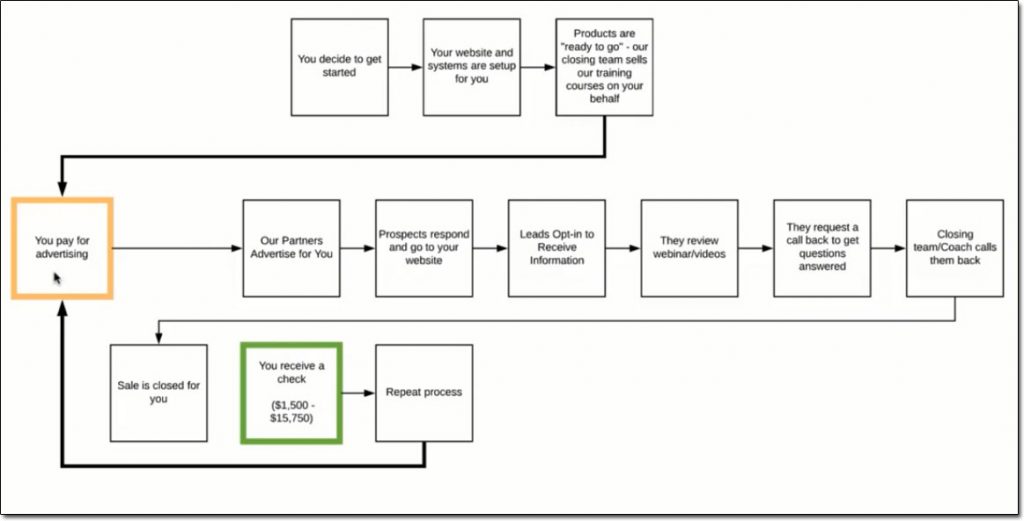 You’ll notice that they’ve highlighted 2 steps in particular – “pay for advertising” and “receive a check”, and that’s because they claim those are the only 2 steps you need to focus on.

Everything else the system does for you, allegedly.

Sounds good up to now, but what exactly is the system doing for you? And what you are selling?

Well, here’s where it gets pretty shady pretty quickly.

The truth is that you’ll be buying into the Done 4 You Business system, then just getting others to do exactly the same. There’s no real product at all.

You see, the Done 4 You Business website is actually just a doorway website which leads people through into a program that I previously reviewed name Secrets of the Wealthy.

Secrets of the Wealthy has 4 membership levels which are as follows:

There’s nothing automated about it.

In order to earn money, you have to be able to market it & get people to spend at least $3,000. If you can’t do that then you won’t earn a penny, it’s a simple as that.

Instead, if you can’t generate sales you’ll just lose money that you invested… And that’s what unfortunately happens to the majority of people that join.

Because of this, Secrets of the Wealthy quickly built up a pretty bad reputation online & so they’ve launched the new Done 4 You Business website to try to hide their name.

How Does Done 4 You Business Work?

In order to understand how the Done 4 You Business program works you must first ignore the completely over-hyped sales pitch that they’ve put out.

There is no fancy automated business model here.

Instead, if you sign up to find out more you’ll just be encouraged to purchase a plan inside of the Secrets of the Wealthy program & those plans are as follows:

So in order to get started, you’ll have to spend at least $3,247 – and that doesn’t include any advertising.

Then, once you’re inside you’ll discover that the way you’re supposed to earn money from the program is by then promoting it & trying to get others to buy into it like you did.

You’ll be told to pay for advertising to do this.

There are 2 problems here though.

The first one is that it’s just a blatant pyramid scheme. There is no real product here, it’s just people signing up to earn money by getting others to sign up.

And the second is that even if you are still interested in participating in it, you can only earn money by reselling the levels that you’ve personally purchased.

So as an example if you buy in at the Gold level for $3,247 & make a sale of the Ultra Royal level for $21,847, you won’t earn the commission – it’ll get passed up to the next Ultra Royal qualified member above you.

This is a trick put into place to pressure you into upgrading right from the start as the creators will claim that if you don’t upgrade to the highest level, you’ll be losing out on commissions.

Is Done 4 You Business a Scam?

Yes, in my opinion, Done 4 You Business is a scam & the reason I say that is because even though it’s “technically” possible to earn with it, it’s extremely misleading & much more difficult than you’re led to believe.

The truth is that most people who join will just end up losing money, not earning it.

And the way it’s being marketed with the over-hyped claims makes it easy to see that the creators are literally set out to trick people who are new to making money online into parting with their cash.

They’re not really interested in helping them make money. They don’t care if they make money at all… They just want to make some money for themselves at their expense.

If they were truly interested in helping people to earn then they would be honest & upfront about their program.

Plus, on top of all that, there’s still the fact that it’s just a blatant pyramid scheme, which is illegal.

There is no focus on any products whatsoever – the focus is just solely on signing up, spending money & then trying to earn commissions by getting others to do the same.

How Much Does Done 4 You Business Cost?

Taken from the video promoting the Done 4 You Business system, here is a screenshot of a breakdown of the costs:

Realistically speaking though, if you were to participate in the program (which I absolutely don’t recommend) then you’d need to spend the full $21,847 to get “the most” out of it.

There’s absolutely no need to spend that kind of cash though when you can get access to perfectly legitimate & much better programs like Wealthy Affiliate for just $49.

Can You Really Make Money With Done 4 You Business?

Technically, yes. If you sign up to Done 4 You Business, purchase one of the packages at Secrets of the Wealthy & then get others to do the same, you can earn at their expense.

You’ll earn commissions of between 50% and 75%, depending on which level you’re at.

The question you have to ask though is if it’s morally right to do that, knowing that the chances of them actually making money will be slim to none.

There absolutely thousands (potentially millions) of things that you can promote online for commissions, so why promote something to people that you know will likely just result in them losing money?

Why not promote something helpful to them instead?

If you’d like to learn how to earn an income by promoting helpful things (as opposed to pyramid schemes) then I’d strongly recommend you check out the Wealthy Affiliate training.

The other problem you have with Done 4 You Business is whether or not the owners of it will actually pay you.

They’re not afraid to con beginners out of their money, so what’s stopping them from ultimately conning their affiliates too? You should tread very carefully.

At a glance, the Done 4 You Business system may seem like an attractive opportunity especially if you’re new to the world of making money online, but it’s something that should definitely be avoided.

It’s not really set out to help you make money. If you’re new, it’s just set out to make you lose money so that the gurus involved with it can earn at your expense.

Stay away from it, and instead stick with a legitimate & proven platform like Wealthy Affiliate.

At Wealthy Affiliate, you’ll learn the full ins-and-outs of affiliate marketing & you’ll discover how you can earn by promoting literally almost any product or service you can think of.

But on top of that, it’s also worth pointing out that there are other legitimate methods of earning online too.

Affiliate marketing (whilst in my opinion the best way) is only one of many legitimate ways to earn.

Sadly programs like Done 4 You Business are just set out to take advantage of people by making things seem a lot easier than they actually are & asking for money to get started.

The truth is that you can actually make good money online, very good money in fact, but you’re always going to have to put in work to achieve it.

There will never be a “push-button” automated system, that’s just a gimmick & anyone promising you access to such a thing is likely just trying to scam you.

So I hope this Done 4 You Business review has helped you to avoid it & to save your money. Feel free to leave any comments below though if you still happen to have questions. 🙂