DonkeyMails is a website that originally launched way back in 2005 & it claims it can help people make extra money online by paying them for completing various simple tasks such as clicking ads & reading emails. 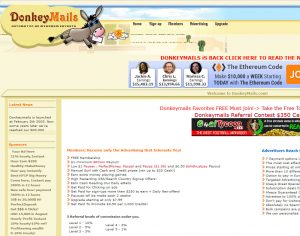 DonkeyMails also claims to be one of the few “Get Paid To” style websites that run automatic monthly payments without any minimum payout limit, too.

But is it actually legit? Or is DonkeyMails a scam?

Well, you’ve landed in the right place to find out because I’ve taken a look into it and in this review, I’ll be uncovering the truth.

DonkeyMails is what’s known as a Get-Paid-To website which basically means they pay you in return for completing simple tasks online – it’s not an opportunity that will see you earning any sort of life-changing amount of money but it is something that can help you earn a little bit of extra cash each month.

The tasks that you can get paid for inside DonkeyMails includes things like clicking ads & clicking links found in promotional emails that they send you – all of the tasks are very straight forward & easy.

DonkeyMails also run a multi-level marketing style referral program through which you can get other people to sign up to the program & earn a percentage of their earnings which is paid out over up to 5 levels of referrals.

So for example, if you referred your friend into the opportunity & he/she then referred his/her friend – you would be able to earn a percentage of both their earnings, even though you personally didn’t refer the 2nd person, and this happens over a maximum of 5 levels as mentioned above.

To be honest, the way DonkeyMails works is actually quite simple – they enable advertisers to buy advertising on their website & then they pay you a percentage of the money to click the adverts.

They also enable advertisers to pay for promotional emails to be sent out to the DonkeyMails members so from time to time you will also receive emails & you can earn money by clicking the sponsored links that the advertisers have put in them.

The only problem is that the advertisers know you are getting paid to click on their ads & so for this reason the advertising is sold cheap (because they know that the chances are you won’t actually be interested in their ads) which ultimately means you won’t earn very much per click.

In fact, it could literally take you thousands of clicks before you even rack up so much as a couple of dollars.

It is legit & does have a track record of making payments on time because the website isn’t owned by any sort of large corporation like the other similar sites, it’s actually just owned by 1 guy & as a result, the website sometimes suffers from downtime which means you can go periods without being able to earn anything.

For example earlier this month the website was down for 25 days:

Though it’s been around since 2005 & it does seem like the owner is genuinely interested in providing a good service – in 2013 he added an update to the website celebrating over 600,000 members which is quite an achievement & shows that many people use the site.

I’d imagine that by now there are possibly over a million members in total but that is just a guess.

The good thing is that it’s completely free to join & that the payments are made automatically every 2 weeks – unlike with other Get-Paid-To sites there isn’t even a minimum payout limit so once you’ve earned anything you’ll be eligible for a payout.

How Does DonkeyMails Pay You?

The good thing about DonkeyMails is that they offer a wide variety of payout options which include:

And as mentioned a little earlier in this review the payouts are made automatically every 2 weeks.

There is no minimum payout limit at DonkeyMails but this only applies if you have the Okpay method of payment selected – there is a payout limit of around $1 on the other methods which in comparison to other Get-Paid-To sites is still very low.

DonkeyMails isn’t a scam, it’s a legitimate website through which you can earn money by completing simple tasks – however, the amount you will be able to earn will only be very small.

It’s clear to me that the reason DonkeyMails don’t set any payout limits is simply that it actually takes so long to make money through their opportunity. Earning just a dollar could take weeks.

It’s good in the sense that it has provided people all around the world with an opportunity to make a bit of extra cash but ultimately, in my opinion, there are much better ways that you can make money online.

The problem with DonkeyMails (and other Get-Paid-To websites like it) is that they reward you very poorly in return for your time – if you value your time at all you probably won’t enjoy these opportunities.

Also whilst the multi-level marketing style referral program offered by DonkeyMails might initially sound quite lucrative, sadly because the members referred into the program can’t really earn much money this opportunity doesn’t pay out much either since the commissions you make from each referral will only be very, very small.

If you are wanting to build a better income & leverage your time then I would recommend you try affiliate marketing instead as that’s one of the best ways to make money online & you can learn how to get started for free at Commission Academy.