Have you come across an email processing system that promises to provide you with an opportunity to earn cash just for processing emails? Just recently I came across one named Email Processing 4 Cash that promises its members could “easily earn $1,000 per day” & another called EPS 2.0 which promised earnings of $500 to $5,000 per month. 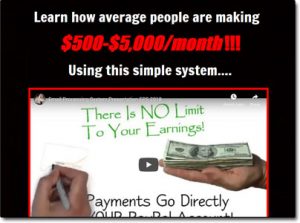 But what’s the truth about these systems? Do they really provide legit email processing jobs that you can actually use to earn money from home or are they just scams that are set out to part you with your cash?

Well, thankfully you can rest assured that you’ve landed in exactly the right place to find out as I’ve personally decided to take a closer look into these email processing systems to determine once & for all whether or not they’re actually legit & if you can really make good money with them (or any money at all).

What Is An Email Processing System?

Email processing systems allegedly provide a new way for people to make money online whilst working from home – or at least that’s what the creators of such systems want you to believe anyway.

They portray themselves as being websites that connect people with legitimate email processing jobs, and visitors are told that all they need to do to start earning money is simply sign up & begin processing emails… It couldn’t sound any easier.

But on top of making the opportunity seem very easy, often the creators of these email processing systems also make them sound very lucrative too, and it’s common to see them offering to pay as much as $25 per email processed (which is an insanely high amount for such a simple task).

In fact below you’ll see a screenshot taken from one of these email processing job websites which shows the “potential earnings” you can supposedly achieve:

Yep, a whopping $273,750 per year is what they want you to believe that you can achieve through the system, just for processing emails & whilst working from the comfort of your own home.

No doubt it sounds like a dream… But sadly that’s all it is – a dream.

The reason these email processing jobs sound so amazing is because they’re completely fake – and the creators are merely hyping them up to sucker you into their schemes so that they can earn some money at your expense.

When I show you how it all really works below you’ll see for yourself what’s actually going on (and why you should avoid any email processing system that promises to make you rich). You’ll also find out the truth behind the email processing scam rumours that have spread around the web – and I’ll show you how you can protect yourself from becoming a victim.

How Do Email Processing Systems Work?

So the honest truth is that there are indeed (believe it or not) actually some legitimate email processing jobs out there – but they are extremely rare, and they pay nowhere near as much as the scams promise that you’ll earn.

So basically whenever you come across an email processing opportunity just take a step back and ask yourself “do this sound too good to be true?” if it does, then I would strongly advise you steer clear of it.

So the scam email processing jobs, which often call themselves email processing systems are basically “tricks” that usually attempt to draw you into some sort of cash-gifting style pyramid scheme without you being aware of it. 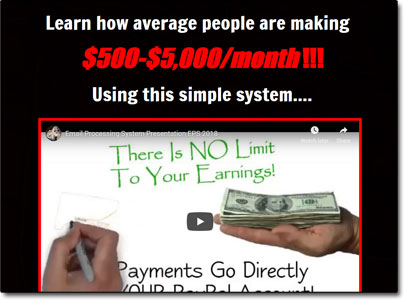 Why would somebody pay so much for you to process the email? Where is the money coming from? These are all questions you need to ask before getting involved with anything to do with processing emails for money.

How Do Email Processing Scams Work?

Basically, when it comes to the scams there isn’t actually any “email processing” going at all, instead, that’s just being used as a bit of a ploy to make the whole thing sound simple to trick you into signing up.

And when it comes to the scams you often have to pay a fee to join, which typically for some reason always seems to be around the $25 mark – but there will also be several other “upgrade” levels too.

The reason for that is because basically the whole thing’s a recruitment scheme – so when you sign up & pay to do so, the money you pay will be paid directly to the person that recruited you… Then from there onwards, that person will do their best to try & get you to upgrade to the higher-priced levels because when they do, they’ll get paid that too.

Often the trick they use to get you to upgrade is they run a “pay to play” model whereby they basically restrict your earnings so that you can only earn money on the levels that you have personally purchased in at.

For example, if you bought in at the $25 level, they’d claim that even if you then recruited someone who upgraded to the $500 level (assuming there is one) you’d only be paid $25, and the rest will be paid to the person that recruited you instead (or the next person that’s qualified at the $500 level).

In fact, instead of making money most people who join these types of email processing systems actually just go on to do nothing other than lose money.

That’s why they should be avoided, because whilst you can make money with them it is not only illegal to be part of such a scheme, but it is also way more difficult than the creators or promoters of them lead you to believe.

Where Does “Email Processing” Come Into It?

Prior to signing up to these schemes, you’re promised that the whole thing revolves around email processing and that you’ll be paid in return for simply processing emails… So no doubt you’re wondering where that comes into it…

Well like I said in the previous section of this post, the whole email processing thing is just a trick. Instead after signing up to the scheme (which I obviously don’t recommend doing), you’ll be told that the “email processing” thing involves you sending emails to people in an effort to recruit them into the system underneath you (so that you can earn commissions at their expense).

This also means that you will NOT be paid directly in return for the emails you “process” like the creators of these systems often claim you will. Instead, you’ll only earn when somebody actually signs up, joins via your link and invests money.

This means you could find yourself sending thousands of emails and not even managing to earn a single penny – and this is actually the likely scenario because how often do people join random money-making systems found in the “junk” folder of their email account? The answer is not very!

In fact, it’s much more likely your email provider would just shut your account down for spending spam before you actually made any money.

So once again it’s just totally not worth it, because the only people who are really profiting from these types of things are the people at the top – the scammers who’ve set the whole thing up or are associated with those that have.

The truth is there are many better ways to make good money online and whilst these email processing systems might seem ideal, they are totally fake & there is no way processing emails is ever going to see you making a living online.

Instead, if you really want to learn how to make good money online you should check out my guide of how I went from $0 to $10k per month here – and it also shows you how you can get started yourself. That is 100% the best way that I’ve found to make money online.

But either way whatever you decide to do I just hope my post here has cleared up any questions or concerns you had about email processing systems & hopefully it’s helped you save some cash too.