Ewen Chia claims that his Fast Track Cash system provides it’s members with the fastest, easiest & laziest way to make real cash. He even claims that it can enable totally brand new people to start earning within just minutes of signing up without having to create any website or product. 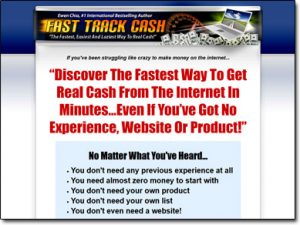 So what’s the deal? Is it really legit or will his Fast Track Cash system scam you & just end up leaving you out of pocket instead?

Thankfully you’ve landed in exactly the right place to find out as I’ve taken a closer look into his system to see what it’s truly all about & in this review I’ll be uncovering everything you need to know, including whether or not you can really make any money with it.

What Is Fast Track Cash?

Despite what the website says, the Fast Track Cash system is NOT a new system. The sales page makes it look like it’s just been released the very same day you land on it but the truth is that it’s actually pretty old.

Ewen Chia the guy behind it actually launched it way back in 2010… Yup, a crazy long time ago!

However despite its old age the system is still around, people are still searching for it & it’s still taking on new members… So does it still really work to this day? And more to the point, has it ever actually worked?

Today the training inside of the Fast Track Cash system is going to be VERY unlikely to help you make any money… And to be honest, even back in 2010 the training was way overhyped.

I mean sure, some people probably did make some money from it – but within just minutes of signing up & thousands of dollars per day? I highly doubt it…

Even back in 2010 when it was first launched most of the people who bought into it probably found themselves spending more money on the training in the program than they ever actually managed to make.

I find it funny that the name of the system abbreviates to “FTC” because I’m sure if the FTC (the Federal Trade Commission) did come across they’d probably have something to say about the misleading advertising! In fact to be honest they’d probably shut it straight down just like they recently did with MOBE.

But anyway, you’ve come across the Fast Track Cash system & you’re here at my review because you want to know how it works – so keep on reading & I’ll show you exactly how it’s all supposed to work below.

How Does Fast Track Cash Work?

Well, the concept (which the website stresses about a million times) is that you’ll be getting access to some sort of cash-generating machine that’ll run for you on complete autopilot 24 hours per day…

I mean here, in Ewen Chia’s own words:

So you’re literally led to believe that you’ll just be able to sign up & pretty much start earning almost right away – without really having to do anything. Ewen states, once again in his own words:

Sadly though, as you’ve probably guessed none of that is true.

And whilst you do actually get access to some training inside of the Fast Track Cash system which might have once upon a time worked, those claims are leaning me towards calling it an outright get-rich-quick scam.

I mean it’s technically not… But it’s darn close.

What Do You Actually Get?

I mean sure you can certainly make money doing that – in fact I personally make most of my own money online as an affiliate – but it takes a fair amount of work to see good success with affiliate marketing.

You can’t just “plugin” to a system & begin making money like Ewen Chia claims you can… Heck if you could then everybody would be doing it (including me!), but whilst the internet is great it’s not magical…

Plus if you really want to make good money through affiliate marketing you could just get started with a legitimate (and up-to-date) training program like Commission Academy which is actually totally free to join.

Oh and by the way, just in case you don’t know what affiliate marketing is or how it works here’s a quick visual I’ve put together which should hopefully explain that to you:

It basically consists of you promoting other peoples products online & getting paid commissions for any sales you manage to generate. The method itself is pretty simple but finding success with it relies on knowing how to promote your links.

For example, you can’t just expect to share a few affiliate links on social media & become a millionaire overnight…

Instead you need to learn how to tactfully promote them, for example using search engines to connect people with the products they’re looking for via your links (which is what’s taught at Commission Academy).

The Problem With Fast Track Cash 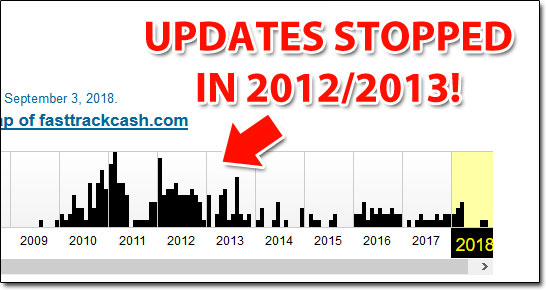 Oh and then there’s also another problem… The price!

The price of his Fast Track Cash system (considering it contains nothing but out of date material) is absolutely insane. I mean sure, it’s only $27 to get initial access to it – but after that you’ll be presented with several costly upsells.

That’s $501 in additional upsells, or should I say hidden costs, and if you don’t purchase them you basically won’t be getting access to the full program… So the $27 is essentially just a “taster”.

However, I think I’ve said enough, which brings me onto…

Is Fast Track Cash a Scam?

I wouldn’t go as far as to call it a scam since you do actually get some training in return for your money, however in my opinion it is extremely misleading & it’s very unlikely that you’ll make any money with it…

Maybe once upon a time, it did work as promised (even though I doubt it) but now it certainly doesn’t & so, therefore, there is absolutely no way that I’ll be recommending it to you because it’s just a waste of money.

Like I said earlier in this review if you really want to start making good money online you could just go through a legitimate place like Commission Academy which has been proven to help people find success (and doesn’t cost anything to join).

But whatever you decide to do I just hope that my review has helped you out & hopefully it saved you some cash. If you do still have any further questions or comments though then don’t hesitate to leave them below & I’ll get back to you as soon as I can.