Free Bitcoin Generators claim to exploit a security flaw in the Bitcoin mining process & promise to provide their visitors with unlimited amounts of free Bitcoin. 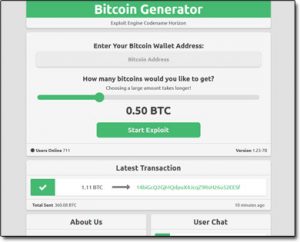 You’re led to believe that can simply enter your Bitcoin wallet address & get unlimited BTC sent straight through without having to do anything at all.

But you’ve probably found yourself wondering, are these so-called free Bitcoin Generators actually legit or are they just a big scam to avoid?

Well, thankfully you’ve landed in the right place to find out because I’ve taken a closer at these generators to find out what’s really going on & in this review I’m going to be uncovering everything you need to know, including whether or not you can really make any money from them.

What Are Free Bitcoin Generators?

As I very briefly touched on above the free Bitcoin Generators (as the name suggests) claim to provide you with a way to exploit a “loophole” or security flaw of some sort in the Bitcoin mining process & generate free Bitcoins as a result.

Here’s the typical sort of welcome message that you’ll be presented with when you land on one of these so-called generator websites:

It might seem like a dream come true to be able to generate Bitcoin in such a way, but sadly, in reality, these sites are nothing but scams.

As opposed to being designed to help you make money or to help you exploit a loophole as they claim, they’re actually just designed to take money from you to make the creator wealthy at your expense.

Of course, though I don’t just expect you to take my word for that since you might be hoping that these Bitcoin generator systems were really going to work for you, so instead let me show you how it all works so that you can see what’s really going on…

How Do Free Bitcoin Generators Work?

The truth is that in reality, these systems don’t work at all – as mentioned above they’re merely designed to take money from you, not help you make it & everything you’re told via these generator websites is complete BS.

And initially after submitting the form to request some free Bitcoin, you might think that the process is working since it appears to show a box running a whole load of commands, allegedly exploiting the loophole as shown below: 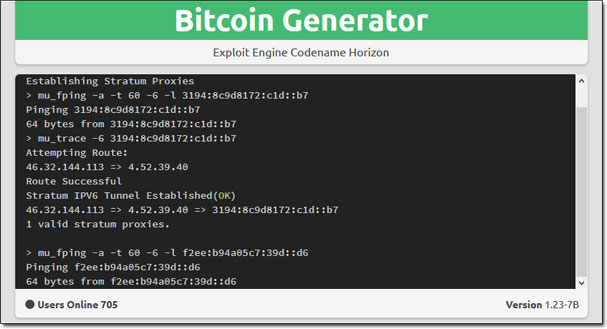 However, the problem is the whole thing is completely fake. It will run for around 10 minutes (or more depending on the amount of Bitcoin you have chosen) and then afterwards it will either request a payment to “complete the transfer”, or it will request you to fill in a survey instead, again to allegedly “complete the transfer”…

The problem is if you do either of those things you’ll be left to find out the hard way that you were being lied to the whole time & that there really is no “free Bitcoin” ready to be sent to you after all.

For example, here’s a screenshot of what happens after the Bitcoin has supposedly been successfully exploited: 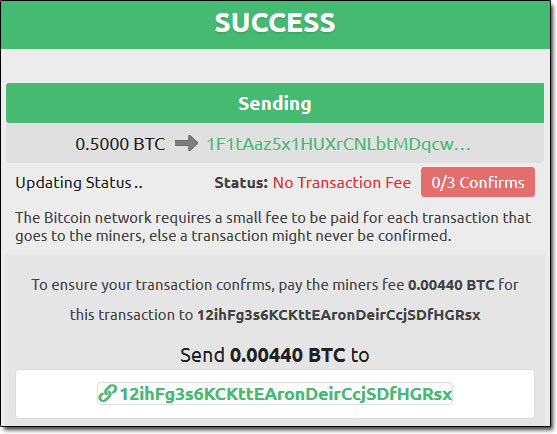 Do not, I repeat do not fall for that. The only person actually making money through this whole thing is the creator that’s put it all together – and the way he is making money is by tricking people into completing surveys or sending him BTC.

He’s hoping that you won’t mind paying the “seemingly” small fee of 0.00440 BTC since you’re being promised to get a whopping 0.5 BTC immediately after… But you’ve got to question if it were real then why can’t the creator merely take a cut from the funds before he transfers them to you?

The simple answer is because it’s not real – and remember, Bitcoin is untraceable so once your money is sent you have no way of getting back, you’ll just be left to learn the hard way that you’ve fallen victim to a Bitcoin scam.

Don’t Fall For The Other Tricks Either…

One thing I’ll admit is that these free Bitcoin generator websites are VERY convincing & if it’s the first time you’ve come across this sort of thing online then it could be very easy to get caught out by it… Especially since the creators have really gone to extreme lengths in terms of putting tricks together to lure you in.

For example, on the homepage of these Bitcoin generator websites, you’ll often see a box that appears to contain a live-chat feed, and it looks very realistic – however, this too is completely fake.

The live-chats often consist of several messages from people who are allegedly also viewing the website & getting free Bitcoin. It’s a ploy that’s been put together by the creator to make you think it’s real.

The messages aren’t actually real though – they’re just on a loop, but the way the creators make it seem legit is by enabling you to also send your own message. What you’ll notice though is that nobody ever replies (because they’re not real people) and if you open the same chat in a new private window you’ll see that your message doesn’t actually display to anybody else viewing the site… It just displays to you on your device.

Honestly, the whole thing is just a big scam – there is no such thing as free Bitcoin generators. It’s just a way for the creators to trick you into parting with your cash so that they can make money at your expense…

I mean come on, if these things were real then why are people still wasting their time (and money) mining for Bitcoin? And on top of that why couldn’t the creator just take his “miners fee” from the money he is allegedly going to send you?

The reason is that obviously, it’s all a big scam and there is absolutely no way you should ever waste your time on any of these sites – especially not when there are so many other legitimate ways to make money online.

Therefore overall I am definitely not going to be recommending these free Bitcoin generator sites to you – instead, I am going to be advising you avoid them because they will ultimately only see you losing money, not making it.

If you do happen to have any further comments or questions about them though then do feel free to leave them below & as always I’ll do my best to respond to you as quickly as possible. 🙂