If you’ve come across the Freedom With Writing website then like me you might think it’s a little peculiar – I mean they claim to fix you up with writing jobs but how does it really work & what’s in it for them? 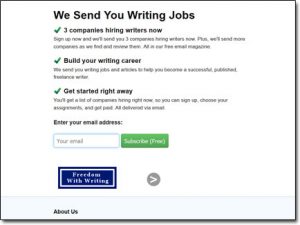 And more important is it actually legit or is Freedom With Writing a scam that’s simply out to somehow part you with your hard-earned cash?

Those questions are exactly what I’ll be answering in this Freedom With Writing review as I’ll be taking a closer look at the website & uncovering everything you need to know – meaning if you’ve been thinking about joining you can rest assured you’ve landed in the right place to find out if it’s the right decision.

What Is Freedom With Writing?

Sadly because there are so many scams online whenever a website comes at us with the promise of helping us make money through some kind of means we’re naturally sceptical, but in the case of the Freedom With Writing website I can say that it actually seems to be fairly legit.

Whilst the website doesn’t give a great deal away in itself, I did some background information & found out a little bit more about it. It seems that the website was set up several years ago by a passionate writer who is just genuinely keen in helping other people catch a break in the world of freelance writing.

Without signing up you can’t really get a great deal from the website but you’re promised that in return for entering your email address you’ll be given access to a whole bunch of writing jobs & will be sent even more down the line.

Like me, you’re probably also sceptical about entering your email into things online because all you need to do is pop it into the one wrong thing & you’ll end up bombarded with spam, but I used an old mail account to sign up to Freedom With Writing & they did actually hold true on their promise.

Taking a Look Inside

The Freedom With Writing homepage promised that after entering my email I’d be given immediate access to 3 writing jobs & that I would be sent more further down the line, so you can imagine my surprise when I found I’d actually been provided with instant access to a list of 53 different magazines & blogs that pay freelance writers… Plus the promise of even more to come.

And the goodies didn’t end there because after checking my email I found I’d also been sent a free eBook named “The eBook Formula for Freelance Writers” which was based around teaching freelance marketers how they could make money by publishing eBooks. I have to say whilst I only had a quick skim it did seem to be packed with valuable content so it was good news on that front too.

I know I know, like me you’re probably wondering what the catch is because it seems like nobody gives anything away for free online these days, but in the case of Freedom With Writing it kinda seems like there isn’t one…

It honestly just seems like some passionate (and successful) writer who also happens to be a good Samaritan has decided to share his experiences & help others succeed with freelance writing by providing tips & a list of places to write for that will actually pay in return.

Is Freedom With Writing a Scam?

Whilst I initially thought that Freedom With Writing might be some sort of scam I actually don’t think it is – in fact, I think it’s quite the opposite. I had suspected that after entering your email address they were going to send you off to some sort of sales letter & claim you had to pay a fee to access their amazing jobs board containing high-paying writing jobs (like Paid Social Media Jobs did) but that’s not the case at all.

After entering your email you’re provided with the list of magazines/blogs that pay writers as promised (even more than promised) and you’re also sent a bonus eBook too which shows you how you can make money by writing eBooks yourself. So far everything that I have received through Freedom With Writing has been completely free & it’s all been valuable information so I really can’t complain.

The only thing I would say though is that Freedom With Writing is more geared towards writing professionals who are looking to write for high-profile publications (such as journalists etc). If you don’t feel you’re quite at that level yet & you’re just looking to make an extra buck at home by doing a bit of blogging on the side then you might want to check out Wealthy Affiliate instead where you can create a blog for free & learn how you can build an income from it whilst you write.