Global Credits Network is a company that promises to provide you with an easy way to passively profit from sports bets that are picked by professional handicappers. 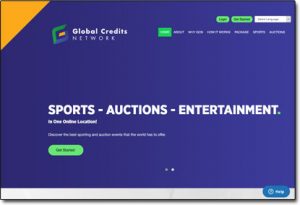 Plus, it also promises to provide one of the most lucrative affiliate programs ever to exist, meaning not only can you invest & earn, but you can supposedly share it & earn too… Or at least that’s why they claim.

The problem? At a glance, it looks a LOT more like a Ponzi scheme.

So what’s the truth about Global Credits Network? Is it a scam that’ll just see you losing your money or does it actually provide a legitimate way to generate a passive income from professionally-picked sports bets?

Well, in short, I can tell you that it IS a Ponzi scheme and that whilst you could potentially stand to make money, you’ll be much more likely to end up losing it. There are far better, legitimate alternatives & Global Credits Network should be avoided.

What Is Global Credits Network?

Global Credits Network claims to be an innovative company that not only combines cryptocurrency (Bitcoin) with sports betting but also bundles in online auctions too in an effort to allegedly “put the fun back in business”.

The idea is that Global Credits Network houses a team of professional handicappers who pick out profitable sports bets & it allows people to invest in order to get a share of the profits that are paid out.

So as a visitor to Global Credits Network you’re able to sign up, pick an investment package & then receive regular payouts from the so-called sports bets that are being placed behind the scenes.

They even claim to win around 60% of bets, so you’re led to believe that you’ll be almost guaranteed to profit.

However, instead of simply getting “paid out” you returns, your returns are given to you as credits which you then use to bid on items inside of the Global Credits Network penny-auctions style auction house.

Some items you may win, some items you may not… The problem though is that if you don’t win, because the auctions are “penny-auction” style you still actually lose all of the credits that you bid.

This is because rather than bidding then paying for the item when you win, you’re basically paying for each bid that you place in the hope of being the last person that gets their bid in before the timer runs out.

I’m going to be honest here, it’s a confusing & strange process, to say the least.

But have they complicated the process on purpose to hide what’s really going on? It certainly looks like it…

On the surface, the Global Credits Network opportunity may seem fairly legitimate. You deposit, professional handicappers place sports bets on your behalf & then you take a cut of the profits.

What could be the problem with that?

Well, the problem is that there doesn’t seem to be any professional handicappers involved or any sports bets getting placed. Instead, that just appears to be a cover-up for the fact that the whole thing is a recruitment scheme.

In fact, basically, it seems they want everybody to become an affiliate because it doesn’t really make sense to join as a “customer”.

GCN Affiliates have all the benefits of a retail customer. They can participate in all of the GCN products and services. In addition, they also get to participate in the lucrative GCN Rewards Program! GCN pays its Affiliates daily once they are qualified.

So the affiliates get everything the customers do, and they’re able to also promote GCN… So becoming just a customer doesn’t really make sense.

Anyway, that aside, more importantly, the affiliate program is paid out over multiple levels & it’s based around a binary compensation plan.

Put simply, that means it looks somewhat like this:

And that’s where the problem comes into play because rather than “sports bets” producing the money that’s getting paid out to other members, it seems that the money is coming from new members that are buying into the opportunity.

The reason it’s bad because that only stands to primarily benefit the people that are at the top of the scheme, such as the creator & his (or her) close associates.

Anybody else who joins after is relying on mere luck because as soon as people stop joining, money stops coming into the company.

So if you were to join, then nobody joined after you, you’d simply lose your entire investment… And that’s what happens to most people that join Ponzi schemes, which is why they’re actually illegal.

Of course though to try & get around the fact that they’re illegal the creators of the schemes come up with tricks (like claiming that there’s some sports betting going on) to hide the fact that it’s a mere recruitment scheme.

The honest truth is that yes, you could stand to actually earn some money from a Ponzi scheme – however, what you have to understand is that the risk involved is simply far greater than any potential reward.

Ponzi schemes are designed to look appealing and to seem lucrative, but you never know when it’s going to collapse.

Plus in order to make any sort of “good money” they work on the fact that you have to constantly keep on reinvesting & of course the longer you have your money held up in there the more chance you have of losing it.

Put simply, there are many better, legitimate alternatives. There’s no need to get involved with such a scheme.

Compared to something like Global Credits Network, affiliate marketing is a much better alternative & if you’d like to learn how to get started with that instead then I’d highly recommend you check out Wealthy Affiliate.

And that’s not the only alternative, I’ve actually put a list over 72+ different alternative ways to earn money right here.

The Other Big Problem – Bitcoin Payments

Some businesses accept Bitcoin, but not many businesses force people to pay in Bitcoin like Global Credits Network does.

Because paying in Bitcoin makes it harder for people to join… Not many people have Bitcoin and those that do don’t really want to spend it – they’re holding it in the hope that it’ll increase in value.

So why would a business want to only accept payments in Bitcoin if it makes it harder for people to purchase?

The answer is because in order to accept normal card payments you have to get a merchant to process them & you have to prove to that merchant that your business is legitimate.

9 times out of 10 if a business only accepts Bitcoin it’s because they’re doing something that’s not legit.

Plus when it comes to Bitcoin there’s the issue of refunds. If you happen to run into any problems, or if you do end up losing money & want to get it back, then it’s nearly impossible because of the nature of how cryptocurrency works.

My advice? Don’t risk it.

That’s right, upon doing research into Global Credits Network I discovered that the company had actually been launched under a different prior to this one but it collapsed within just a few weeks after launch.

The original name of the company was Sports Trading BTC & Global Credits Network is essentially version 2.

Now, you might be thinking that the creator of Global Credits Network refunded the investments back to those who were involved with the original version under the name of Sports Trading BTC, but nope.

According to a few sources, none of the members of Sports Trading BTC have been repaid their investments.

It appears that the creator simply used the invested money to redevelop & rebrand the scheme in an effort to trap more unsuspecting victims & it wouldn’t surprise me if this new version also disappeared shortly.

Is Global Credits Network a Scam? My Verdict

Well, ultimately I guess it boils down to how you define a scam, but in my opinion yes, it is a scam. The reason I say that is because it’s misleading & as far as I’m concerned most people who join will just lose money.

However, as mentioned further up in this review there is the potential that you could actually earn something with it… So in your opinion, it may not necessarily be a scam, just a “risky” way to make money.

Either way though, it’s illegal… So it’s safe to say I won’t be recommending it.

Instead, if you want to legitimately & sustainably earn money online I would advise you to choose something else, like affiliate marketing which is actually the same way I personally make most of my own money online.

Affiliate marketing is a great way to earn money online & it’s pretty easy to get started with thanks to programs like Wealthy Affiliate.

It basically involves you promoting products or services from third party companies in return for commissions. So as an example you could promote products from sites like Amazon & earn money if people purchase them.

The best part? The amount you can earn is completely uncapped, so the harder you work – the more you can make.

But aside from that, there are also some other alternatives for earning money online too which you can learn more about on my top picks page here.

Whatever you decide to do though I just hope that my review of Global Credits Network here has given you a good insight into how the whole thing works & most importantly I hope it’s helped prevent you from losing money.