The HB Swiss robot calls itself a legit Forex trading robot that’s allegedly been built on a Swiss quality algorithm & you’re led to believe that it can essentially generate you a substantial income entirely on autopilot from online trading. 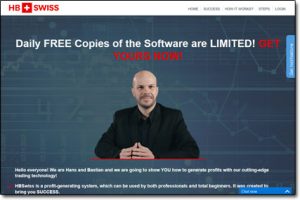 The so-called creators named Hans & Bastian claim that all you need to do is sign up, make a small deposit with their recommended broker & then activate the system to begin making money.

But is it really legit? Or is the HB Swiss Robot a scam to avoid?

Well, you’ll be glad that you came here first before signing up because what I can tell you straight away is that the HB Swiss Robot is NOT what it seems & in this HB Swiss Robot review I’m going to be uncovering the truth as to how it all really works…

What Is The HB Swiss Robot?

The HB Swiss Robot portrays itself as being an automated trading platform & you’re led to believe that you can essentially just sign up, make a small deposit & then begin generating a substantial income all on complete autopilot.

The creators who claim to be named Hans & Bastian state that you don’t need to do anything at all as the system has supposedly been built on a Swiss quality algorithm that will do everything on your behalf so that you can just sit back & earn.

The algorithm (according to them) detects profitable trends & makes trades automatically which they claim are profitable 99% of the time… And they even claim that you can get instant access to their system for free.

But you’ll probably agree with me when I say that the whole thing just sounds WAY too good to be true right?

I mean if this thing really worked as promised then why isn’t everybody using it? Why are people stuck working at jobs they dislike if they can just use the HB Swiss Robot system to make thousands of dollars per day all on complete autopilot?

Well, the answer is because as you’ve probably already guessed, it doesn’t work as promised. The truth is that the HB Swiss Robot is actually nothing but a scam that’s set out to part you with your hard-earned cash.

And the reason I can say that so confidently is because I’ve seen these exact scams several times before… In fact, I’ve exposed literally hundreds of them right here on this blog. They’re called binary options scams & they’re nothing but bad news.

You don’t have to just “take my word for it” though, instead keep on reading & I’ll show you exactly how it all really works so that you can see first-hand for yourself what’s actually going on (and why you won’t make any money with it)…

How Does The HB Swiss Robot Work?

Well, in short, it basically doesn’t work. You see the whole thing is actually just a ploy that’s been designed to trick you into depositing with an unlicensed, unregulated binary options broker so that the creator can get paid a commission at your expense.

Hans & Bastian (the so-called creators) aren’t real people. They’re just fictitious names & the photos of them have been pulled from stock-image websites… The whole thing is just a big fat con.

The real person that’s behind it though (who remains anonymous) has basically affiliated himself with a binary options broker. This means that if you sign up & deposit via his site, he gets paid a commission…

But he’s aware that most people know that binary options trading is VERY risky & as a result, most people will avoid making any deposits… So he’s created a fake system to try to trick people into thinking that they’ll profit so that he can get them to deposit & earn some commissions.

And this is where it gets even trickier because from there you might think that you’ll just be left to find out the hard way that it doesn’t really work as promised… But nope, the creator is much more cunning than that.

Instead, he has set his HB Swiss Robot up to actually falsify your profits so that it makes you think that you’re actually winning… But you’re not, his system isn’t actually connected to any real markets & it’s just a trick to get you to deposit even more money.

Unfortunately, many people fall for it & end up losing tens of thousands to these things… It’s a terrible scam but many people think that it’s “risk-free” because they’re unaware that the brokers are in on it too.

And just in case you’re still thinking about “trying it out” (which I know sadly some people will be), let me show you something…

Well, there is one main reason why these systems could NEVER work & that is down to the fact that binary options brokers don’t add fees to their trades. Instead, they make their money when you lose money… They don’t make money if you win.

In fact, if you win, they actually LOSE money…

So think about this for a moment – why on earth would a binary options broker (who only makes money when you lose money) pay the creator of a “guaranteed winning system” commissions for referring you?

There’s absolutely no way they would because it wouldn’t make sense. A binary options broker wouldn’t want you winning because it’d end up putting them out of business so they certainly wouldn’t pay commissions to the person that referred you.

On top of that though there’s also the fact that HB Swiss Robot website fails to display any company information & most importantly license information. It’s a requirement by law for investment-related websites to be licensed & show details of their license, but HB Swiss Robot fails to do so.

You should NEVER invest via an unlicensed website because not only is it likely a scam, but it also means that you don’t really have any comeback if anything did happen to go wrong. It’s way too risky.

Is The HB Swiss Robot a Scam?

Yes, there’s no doubt about it, the HB Swiss Robot is definitely a scam. The whole thing is built on lies & it’s purely set out to part you with your cash (and as much of it as possible) so that the creator of it can earn at your expense.

Like I mentioned earlier in this review this is the first time I’ve exposed one of these things – I’ve actually exposed literally hundreds of them & they’re all the same but keep launching under different names in an attempt to con even more people.

The truth is that yes it is possible to make good money online but in order to do that you need to put in some work to make it happen. No system or method is going to make you rich without you having to do anything, that’s just a pipe dream.

The good news though is that if you are willing to put in the work that’s required then there are programs like Commission Academy which will show you the proper way to get started & it’s there that you’ll learn about the same way I make most of my own money online.

Also alongside that, there are other good ways to make money online as well…

But whatever you decide to do I just sincerely hope that my honest HB Swiss Robot review here has given you a good insight into how it works & hopefully it has helped you to save some of your hard-earned cash.

If you happen to have any further questions or comments you’d like to add then don’t hesitate to leave them below. 🙂