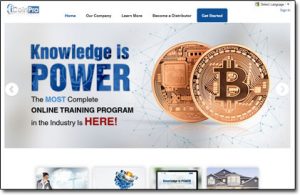 There’s a HUGE amount of hype surrounding Bitcoin and other cryptocurrency investments at the moment as many headlines have started appearing in the media about amateur investors who’ve been able to cash in big-time on these new currencies.

And with the increase in popularity of these types of investments, there’s been an increase in so-called “systems” that promise to help you achieve easier & quicker riches through these currencies.

Sadly the majority of these cryptocurrency “systems” that have been launching have turned out to be nothing but Ponzi schemes, taking advantage of the lack of regulation currently surrounding these currencies. Xtreme Coin was just one of them that I recently exposed, but there’s been literally hundreds launching.

So now whenever I come across one of these opportunities promising untold riches through cryptocurrency investments I’m immediately sceptical, and as a result, I’ve decided to take some time out today to take a closer look at the iCoinPro opportunity to see if it’s actually legit because this one particular company seems to have been generating massive interest over the past couple of weeks.

Meaning if you’re considering getting involved with iCoinPro but you’re not quite sure whether you should or not then you’ve landed in exactly the right place to find out.

Well, first things first I want to stress that iCoinPro isn’t like the other Bitcoin investment schemes that I have seen surfacing as of late which is quite refreshing (and FYI I’m not saying that means it’s legit, I’m just saying that it’s refreshing to have something different to investigate).

You see the Bitcoin/cryptocurrency schemes that have been surfacing as of late have all been investment Ponzis, whereby you invest in the currency & then you earn money as new people come into the scheme & make investments (as the investments they make get passed up to you).

You can potentially make money with those sort of schemes, however, there are 2 big problems. The first one is that they’re illegal (yes – big problem), and the second one is that you are relying on new people investing in order for you to recoup your own investment & make a profit – if nobody new comes in after you invest then you lose all your money.

Basically, you want to stay far, far away from those sorts of things… It’s not worth getting involved as it rarely ever ends well.

iCoinPro on the other hand is not an investment scheme, it’s actually just a training program through which you can learn all about Bitcoin & the other cryptocurrencies that are launching in the market.

After signing up for the $39.95 monthly membership you’ll get access to their training centre through which you’ll learn all about the cryptocurrency technology, what the uses are for cryptocurrency & details on how you can get started investing.

One of the most valuable features in my opinion is that they claim to keep you updated on any changes to help you make good investment decisions. This is important because lot’s of people just invest in cryptocurrency & think that’s the end of it, but the currency & technology is ever-changing so it’s important to keep updated otherwise you could end up sitting on a totally worthless investment.

It’s safe to say that iCoinPro has been getting very heavily promoted over the past couple of weeks & you might be wondering why? I mean if it’s not an investment scheme that relies on new people coming in for members to make money then why are the members so eager to get people in?

The answer is because it’s actually a network marketing company – so whilst members can sign up to iCoinPro & get cryptocurrency training, they can also sign up to iCoinPro as a “distributor” and earn commissions by recruiting people into the business.

iCoinPro distributors will earn commissions when they get somebody to sign up for the monthly membership, but in typical network marketing fashion, the real money comes from building a downline.

That’s because if you recruit somebody into iCoinPro & then they go on to start recruiting people too then you get a commission on the sales they make too… and this goes on through numerous levels.

The problem with this is that again in typical network marketing fashion it all starts looking a bit too pyramid-shaped for my liking.

Should You Join iCoinPro? My Final Verdict

I’m not going to recommend you join iCoinPro & there are a few reasons for that. Firstly, from a retail point of view, I feel that the training is quite expensive, especially since you can get similar training elsewhere online for free.

I appreciate that within iCoinPro the training is laid out step-by-step & that is a bonus, however, I don’t feel that alone justifies a recurring monthly fee of $39.95. If that fee was a one-off amount then I would have possibly recommended the training, but after the first month, the only additional thing you’re getting access to for your subscription is cryptocurrency news.

Secondly, I feel that the iCoinPro business opportunity is very pyramid-shaped & I fear that the iCoinPro membership has been priced with commissions in mind as opposed to the actual value provided by the training.

Basically in my honest opinion, I think that iCoinPro is more of a money-making “scheme” than a genuine training company, and whilst they do provide some training, I feel that it’s more of a cover-up for what’s actually going on. I believe that most people joining iCoinPro will be getting sold on the opportunity as opposed to the product, and if that’s the case then it’s bad news.

Plus the compensation plan itself is super complicated – you would need to go on a training course just to understand the iCoinPro comp plan let alone Bitcoin & cryptocurrency investing!

It’s a shame though really because I feel that the creators of iCoinPro had quite a good idea by launching a cryptocurrency training program & as a stand-alone, without the attached opportunity (and lower prices) I think it could have been quite a successful program.

Unfortunately, though they’ve decided to attach a network marketing opportunity & as a result they’ve hiked the prices, so for that reason, I won’t be recommending iCoinPro to you – but at least it’s something more promising than all the other Bitcoin investment schemes that came before it.