Have you been contacted by an Instagram sugar daddy offering to pay you money in return for “attention”? 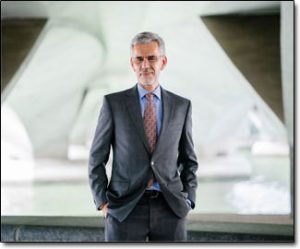 …and are you now wondering if it’s actually legit or if it’s just some sort of scam that’ll end up costing you instead?

Well, the good news is that you’ve landed in exactly the right place to find out because my friend was just recently offered an “allowance” of $400 per week from a so-called Instagram sugar daddy & as a result, I decided to personally take a closer look into it to see what it’s all about…

The not-so-good news though is that as you’ve probably guessed, the offer of money isn’t legit… But if you stick around here & keep on reading I’ll explain exactly how the sugar daddy scam works (and how you can really get paid instead).

Lately, it seems that a ton of females (and potentially some males too) have been receiving unsolicited messages in their Instagram DM’s from so-called wannabee sugar daddies who claim to be lonely & in need of attention.

The messages typically tend to claim that no sexual relationship or exchanges are necessary & nor are real-life meetups… The “daddies” claim that all they want is some attention & that they are willing to pay an “allowance” for it.

The red-flag though is the fact that the offered allowance is typically quite a large sum… Many people are being offered hundreds of dollars per week by complete strangers in return for some back & forth messaging which just seems a little “too good to be true”.

I mean don’t get me wrong though, sugar daddies are indeed real – and there are most certainly girls (and some guys) receiving large sums of money in return for various exchanges… However what you have to ask is, why would these guys offer the money to a complete stranger?

If they’re so desperate for attention then it would make more sense to find a sugar baby closer to home, right? Somebody that they could at least have the potential to maybe meet in the future… So that’s a red flag on its own.

So how does the scam work? And how do they actually end up getting money from you? Keep reading because that’s exactly what I’m going to explain next…

I mean yes it might seem too good to be true… And yes the money might seem like an excessively large amount… But if somebody wants to pay YOU, then how on earth could you end up getting scammed from it?

You couldn’t, could you?

Well, unfortunately, you can, and it’s actually very cunning…

You see there’s actually a couple of variations of the scam but 9 times out of 10 the scam is done by using gift cards or prepaid cards, and in short, the “sugar daddy” basically tricks you into buying one of these & then wipes it clean of the cash.

Initially, the scam will start with an unsolicited message that looks something similar to the one pictured below: 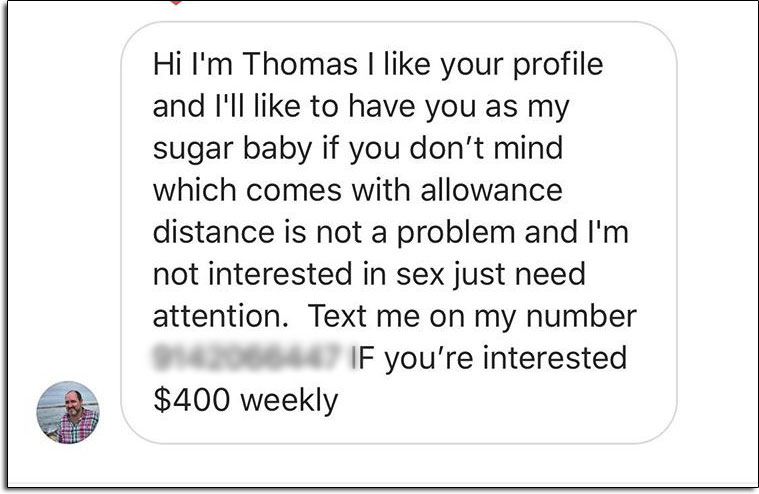 Then, if you text (or reply) as instructed the so-called “sugar daddy” will tell you to do 1 of 2 things…

Or he will ask you to go out & purchase a gift card or prepaid debit card. As I mentioned a little bit above this is the most common version of the scam because most people are sceptical when it comes to giving out their banking/card information (and rightly so). 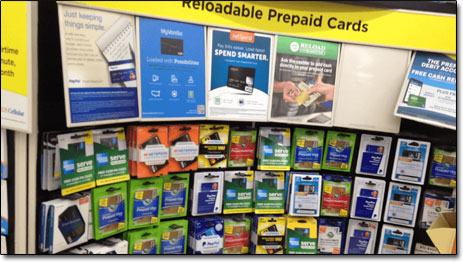 And normally people would be sceptical about purchasing a prepaid card or gift-card when told to do so by a stranger online, but because of the large sums of money offered by these “men” many people try it, “just to see if it’s real”… Which is exactly what these guys prey on.

Unfortunately, though most gift-cards or prepaid cards can’t be purchased empty. Nearly all of them have to be loaded with some funds upon their purchase in order to activate them… Even if it’s just $5 or so.

The so-called sugar daddy though tells you that it’s okay and that you just need to cover the initial purchase of it & that he’ll then load it with money for you every week which you’ll be able to withdraw. More often than not he claims it’s so that you can both do the whole sugar thing privately, which seems like a pretty convincing excuse.

However, this is where the problem arises… Because in order for him to “load up the card with your allowance” you have to give him the details of the card and guess what he’s gonna do? He’s not gonna load anything up – he’s just gonna empty it.

Well, that is if you’re lucky – because unfortunately there’s an even worse version of the scam which can actually leave you in debt.

In the worse version, the sugar daddy will ask for the details of the card or your bank account as mentioned above, but then he will claim to pay your allowance via cheque. He’ll tell you to pay it into one of those accounts & when you do it’ll appear to go in as promised.

The so-called sugar daddy will then pull the money out of your accounts & withdraw it in cash leaving the account empty… Which might not seem like much of a loss… Until you later find out that the cheque bounces, meaning you now owe the money that he withdrew.

So let’s say he gives you a cheque of $400… You deposit it, he withdraws $400, the cheque bounces and YOU now owe the card company or bank $400 because it was you who cashed the dodgy cheque.

Therefore hopefully now you can see why it’s really important to be SUPER careful when it comes to these sugar daddy things because it can turn into a real nasty scam that could leave you drastically out of pocket.

But providing you apply the good old saying that “if it sounds too good to be true, it probably is” then you should be okay… Unfortunately, though these types of scammers are great at capturing people in the most desperate of situations when they might not be thinking so straight…

Well of course not ALL sugar daddies are scammers… Though 9 times out of 10 unsolicited ones will be, there are indeed some genuine sugar daddies in among the mix who genuinely will want to pay you money in return for some attention.

But how can you tell the real sugar daddies from the scammers?

Well, the simple rule is that you should NEVER have to go out and buy anything or do anything in order for them to pay you… And never give them your bank account information as a means of payment (regardless of how “safe” they try to convince you it is).

If they want to pay you then tell them you accept PayPal or Venmo only… That way you can’t get scammed… And never give them anything before you’re 100% confident that the payment has legitimately cleared.

But to be honest, finding a legitimate sugar daddy these days is gonna be pretty darn difficult. Yes, there are a lot of genuine sugar daddies only but there are also a lot of “sugar babies” too… So I would roll with an alternative way to make money instead.

One of the greatest ways to make money with Instagram instead of fooling around looking for sugar daddies is something called affiliate marketing… Which is basically where you promote products or services in return for commissions.

You’ve probably seen many of the celebs and influencers promoting stuff & getting paid for it – and you can too. What’s more, is that some of the commissions can literally range into hundreds (even thousands) of dollars per single sale.

That’s how some of those influencers are racking up tens of thousands per post… And despite what you might think it’s not actually all that difficult to get started with, especially since there are step by step training programs like Commission Academy which show you exactly how to do it.

So if you really want to make GOOD money from Instagram then I’d strongly advise putting the whole “sugar daddy” thing to one side & instead just joining Commission Academy & learning how to promote products as an affiliate instead.

It’s actually the same way I personally make most of my own money online & you can read how I made over $10,000 per month with it myself right here.

Hopefully, this post has been insightful for you & hopefully, you can now see how the Instagram sugar daddy scam works, but most importantly of all, I hope that this post has helped to prevent you from becoming a victim of the scam yourself.

And secondly, if you yourself have indeed been approached by somebody offering to pay you money who you think is actually just out to scam could you please leave details of your experience below to warn others. It’ll be a great help as sometimes these scammers get wise & switch up their scam to try & catch more people out. 🙂