Mass Income Machines is a new program that has allegedly been put together by two guys named Jacob Allen and John Forbes & you’re led to believe that it can enable you to begin earning as much as $42,000 per month online. 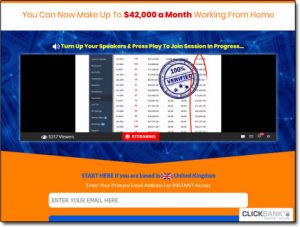 So what’s the truth, is it really legit & can it truly help you make money? Or is Mass Income Machines a scam that’ll just end up costing you more than you ever manage to make?

Thankfully you’ve landed in exactly the right place to find out as I’ve taken a closer look into it to see exactly how it works & in this review I’ll be uncovering the honest truth about it, including of course whether or not you can really make any money with it.

What Is Mass Income Machines?

Mass Income Machines is a new website that’s just launched via the ClickBank network & it promises to provide you with a revolutionary new way to easily earn tons of money online in a relatively short of space of time.

In fact the guys that you’re led to believe have created it (who are named Jacob Allen and John Forbes) promise that the method they’re going to share with you via the program could see you earning as much as $42,000 per month – even if you’re totally brand new.

I mean come on, if it was really so simple to make $42,000 per month then why isn’t everybody doing it? There’s got to be a catch somewhere right?

And why are we forced to hand over $37 before we can find out how it all works?

But I know what you’re thinking – how can I be so confident about that right from the off? Well, the reason I can be so confident is that I’ve actually exposed this exact same system before when it was previously launched under the name of Profit 24/7.

The exact same website address (makemoneyonline.network) was used to host the Profit 24/7 scam & they’ve simply just kept the same URL but changed the website name & appearance around a little.

This is a common trick used by scammers to try & escape the negative reviews so that they can continue parting people with their hard-earned cash – just they don’t normally make it so obvious by keeping the same URL.

I guess these are cheapskate scammers! But anyway, let explain how it all works – or should I say, doesn’t work!

How Does Mass Income Machines Work?

Essentially the Mass Income Machines website portrays the idea that you’re going to be easily able to earn lots of money really quickly, and that you can do it even if you don’t have any experience at making money online…

They basically want it to seem like everyone can make money with their system, to lure as many people in as they can… And the video they’ve put together to promote the whole thing is really enticing…

In fact, after watching the video you will probably be raring to go, the opportunity sounds ideal, but one thing they don’t tell you in the video is how it all actually works – or what you’ll actually be doing.

And those are two pretty darn important things!

Instead, you’re forced to hand over $37 to find out more – and that’s essentially where the scam begins.

You see the creators of the Mass Income Machines system Jacob Allen and John Forbes want you to believe that you’ll be getting access to some sort of done-for-you money making website, but that’s not the case.

In fact, Jacob Allen and John Forbes are not even real… As the screenshot shows below those are just pen names that the true creator of the Mass Income Machines program is choosing to hide behind.

If you had truly created a program that could legitimately help people earn $42,000 per month with ease then why on earth would you be interested in hiding behind a fake pen name? More often than not the people who choose to hide behind fake pen names are scammers – and that’s exactly the case with the creators of the Mass Income Machines course.

The truth is there is NO done-for-you website at all. Instead, all you get access to after handing over your cash is some VERY poor quality training on affiliate marketing.

Now don’t get me wrong here, affiliate marketing in itself is a very good & legitimate way to make money. In fact, it’s the exact same way I personally make over $10,000 per month online… But to profit from it successfully you need good training.

But the Mass Income Machines training is just total junk – and there is absolutely no way that it will truly help you make money. In fact, you’d be lucky to make as much as a single $1 with it, let alone $42,000 per month.

So essentially the whole thing is just a trick. They make it all seem super simple & straight forward, but after handing over your cash they’ll just leave you to feel disappointed when you discover it’s nothing like what they made it seem.

And the other “dodgy” thing is that immediately after signing up you’re forced through THREE upsells – where the creators try to get even more money from you (and these could cost you hundreds of dollars).

It’s therefore blatantly obvious that rather than actually being set out to help you make money like they claim they are, the creators of the Mass Income Machines program are actually just set out to make themselves wealthy at your expense instead… Which brings me onto…

Is Mass Income Machines a Scam?

In my opinion yes, Mass Income Machines is a scam & I say that because it ultimately lures you in on the promise of being able to easily earn $42,000 per month but in reality that just isn’t going to happen.

So, all in all, it doesn’t look good for the Mass Income Machines program & there is no way I can recommend it to you. It’s not set out to help you make money at all as it claims – it’s just set out to take money from you to make its creators rich instead.

The truth is though like I mentioned earlier in this review, you can indeed make money through affiliate marketing – you just need a legitimate training place like Wealthy Affiliate to help you get started that’s all.

And if you don’t believe it’s possible, you can read about how I personally ended up making $10,000+ per month with affiliate marketing right here. Trust me, it truly is the real deal when it comes to making money online!

But anyway hopefully this review here helped you dodge the Mass Income Machines system, and if you do happen to still have any further questions or comments about it then don’t hesitate to leave them below.