Getting paid to watch movies sounds great doesn’t it? And that’s exactly what the brand new Movie Review Profits system claims it can enable you to do. 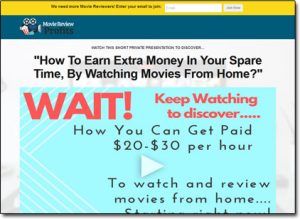 But is it really legit & can you actually make money as easily as they claim? Or is Movie Review Profits a scam that you should avoid?

Well I’m glad you decide to do your due diligence before signing up because I can immediately tell you from the off that the Movie Review Profits system is NOT what it seems and the truth is that you will be unlikely to actually make any money with it.

What Is Movie Review Profits?

In short Movie Review Profits is a brand new website that makes it seem like you can earn lots of money really easily online by simply watching movies & then writing short reviews about them.

And Jeff makes it seem like a “job”, so you’re led to believe that for each review you write you’ll be getting paid in return for your efforts…

But what’s strange is that Jeff requires you to hand over $37 of your own hard earned cash to get started.

Now I don’t know about you but I’ve never heard of any legitimate “jobs” where you have to hand over some of your own money to get started. That’s not how a job’s supposed to work, they’re supposed to pay you…

And the reason Jeff wants your money is because it’s NOT a job he’s providing you with.

In fact to be honest the whole thing is completely misleading & despite him claiming that you’ll earn $20 to $30 per hour the truth is that you’ll be very lucky to even make so much as a single dollar.

If you join Movie Review Profits you’ll actually just be more likely to find yourself spending more money than you ever make, and you’ll see why as I explain the finer details on how it all works below…

How Does Movie Review Profits Work?

However that is NOT the case, there is no job at all…

Instead after handing over your money to purchase the Movie Review Profits system you’ll find that all you’ve recently purchased is some extremely basic training on a method of making money known as affiliate marketing.

Now here’s the deal, affiliate marketing in itself is legitimate – and it’s actually the same way that I personally make most of my own money online… But the way that Movie Review Profits sells you into it is NOT legit, and as a result it’ll be unlikely that you’ll make any money via that site.

If you really want to make money with it you should join a proven, legitimate program like Commission Academy.

But how does affiliate marketing work? And can you really make money by watching/reviewing movies with it?

So as an example you could sign up as an affiliate of Amazon (which is free to do) and then you could promote any of the products from their website & get paid commissions if anybody buys them via your link.

Here’s a visual rundown of it which may help you get a better understanding:

And this is where the “con” inside of Movie Review Profits comes in, because remember I said that Jeff the creator makes out like you’re going to be getting access to some kind of job where you’ll be paid directly for your time?

Well you’re not – instead you’re just provided with some very basic training that tells you to build a website, publish movie reviews & then link to movie related products as an affiliate (which would mean you’d earn commissions from any sales).

So there are a few BIG problems with this…

Therefore the whole thing is nowhere near as it’s made out to be & the truth is that really it has just been setup to make its creator wealthy, not you, and the creator will just be getting wealthy at your expense.

I mean yes, it IS actually possible to make money by writing movie reviews as an affiliate – however in order to actually be able to do it you will need the help of proper training like that found over at Commission Academy.

You must be prepared to initially put in some work without receiving any income at all as it takes time for people to start coming to your website & purchasing things, and it’s only then that you’ll begin to make money.

The good news though is that if you are prepared to put in some work & be patient then my free guide here shows you how you can start a free website & get yourself on your way to making good money. 🙂

Is Movie Review Profits a Scam?

Well in my opinion yes, it is a scam because it is extremely misleading & it makes you believe that you’re almost going to be guaranteed to make money when the reality is that you’ll probably just end up spending it…

However from a “technical” point of view they’ve kinda covered their butts because they do actually provide you with some training in return for your money which could potentially see you earning money by writing movie reviews (even though that it’s unlikely that it will).

Regardless though there is simply no need to even think about joining the Movie Review Profits system because you can get proven & legitimate training for free over at Commission Academy which will show you how to make money by writing reviews.

And you will stand a MUCH greater chance of finding success at Commission Academy too because as a member there you get access to a whole community of people who are ready to help you if ever you feel stuck.

So as you can probably expect I am not going to be recommending the Movie Review Profits system to you because as far as I’m concerned it’s built up on misleading claims & it’s just set out to make its creator wealthy at your expense.

But hopefully this review of Movie Review Profits has helped you to dodge it & hopefully you now have a better understanding as to how it all works. Oh and don’t forget there are also other great ways to make money online aside from affiliate marketing too.

Comments and questions can be left below. 🙂