New Tycoon Plus claims to provide a cloud mining solution that could see you passively earning thousands of dollars from the cryptocurrency Bitcoin and it states that anybody can get started even with just a little investment. 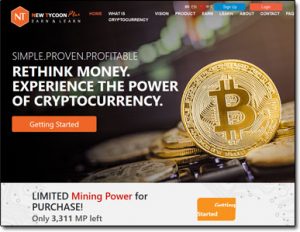 But the promised ROI at 6% sounds insanely high & that’s probably made you very suspicious of the whole thing… After all, it can’t be that easy to make money right? So what’s the deal?

Is it actually legit or is New Tycoon Plus a scam that’s just going to part you from your cash?

Thankfully you’ve landed in the right place to find out because I’ve taken a closer look at this company & in my review here I’ll be uncovering everything there is you need to know, including how it all really works & whether or not you can make any money with it.

What Is New Tycoon Plus?

As I briefly touched on above New Tycoon Plus is a website that’s recently launched & promises that you can passively earn lot’s of money by investing in their alleged cloud mining solution which mines for Bitcoins.

Just in case you don’t know, there are 2 ways you can get Bitcoins – you can buy them, or alternatively you can mine them. Mining basically consists of using computer algorithms to “crack a code” and generate them.

Now you might think it makes sense to just mine them especially since the price of a Bitcoin is currently around $9,000. In fact, you might be wondering why anybody is buying them at all if you can just mine them instead…

Well, the truth is whilst mining sounds easy, it’s not. Each time a Bitcoin is mined the “code” that the computer needs to crack gets harder, and this means the computer will need to use more power to get past it.

When Bitcoins were first launched it didn’t take much effort to mine a Bitcoin… But now you need special powerful technology & not only is this expensive to invest in but it’s also very expensive to run. Basically it’s now out of reach for most normal people, and mining is reserved for the experts…

But people are obviously still interested in mining, so several companies have launched off the back of this who claim to provide you with ways to tap into their mining operation & profit from it, without having to actually buy or set up any of the equipment yourself.

New Tycoon Plus is one of them – it claims you can just invest money and start profiting from their mining operation without you having to actually do anything. You’re led to believe that you can just sign up, invest & start making money.

It sounds nice in theory but sadly many of these “mining companies” like Power Mining Pool for example are nothing but Ponzi schemes. They don’t actually have any mining operations going on, instead, they’re just passing money directly from member to member.

And I’ll admit it looks like the exact same thing is happening here with New Tycoon Plus because there’s absolutely no evidence of a real mining operation at hand… But I won’t brush it off so quickly, instead, let’s take a look at how it all works…

How Does New Tycoon Plus Work?

To be honest, the process involved over at New Tycoon Plus is pretty simple, and that’s what makes it even more worrying. You know the good old saying “if it sounds too good to be true, it probably is”? Well, it definitely looks like that saying applies here…

New Tycoon Plus leads you into believing that you can just sign up, deposit some money & start making money back completely passively without having to do anything at all.

They tell you that you can earn a fixed interest of 6% per month & I appreciate that might not initially sound like a lot but in terms of investing that’s an insanely high ROI… Typically unheard of. It means that if you were to invest $100,000 you could be earning a whopping $6,000 per month…

Top entrepreneurs like Richard Branson, Warren Buffet etc would be on the news pushing this thing like crazy if it were true… But instead, it’s funny that you’re left to find out about the New Tycoon Plus from a spam email in your junk folder.

The whole thing rings alarm bells for sure!

The reason the media isn’t pushing the New Tycoon Plus opportunity is because it’s almost certainly a scam. There’s no proof of the alleged mining operation, there are no details about the companies address, and the company doesn’t hold any regulatory licenses to operate legally within the financial industry.

Couple that with the fact that they heavily push a recruiting program on their website and it looks to me like the company is actually just a Ponzi scheme… Or a pyramid scheme whatever you want to call it.

Can You Actually Money With New Tycoon Plus?

I’ll be honest here and they say that the answer to that is yes, it’s possible to make money with New Tycoon Plus though you should be aware that it’s extremely risky & the likelihood is that overall you will end up seeing losses rather than profits.

The reason for that is because like I said above, the whole thing looks an awful lot like a Ponzi scheme. This basically means that there is no mining operation going on & that instead the money getting paid to people invested is merely the money getting paid in by new investors… So everyone’s just passing money to each other.

This type of scheme is only designed to make the creator rich, and whilst the people who get in early may end up seeing a profit themselves – most other people end will end up losing money since the scheme is totally unsustainable.

Eventually, it will either reach a point where the pyramid becomes too big & collapses, or where new people stop investing & the money stops flowing in. The longer you have your money in for, the more it becomes at risk…

Is New Tycoon Plus a Scam?

As far as I’m concerned, yes it is a scam – that’s my opinion anyway unless they can prove otherwise by showing legitimate evidence of a mining operation & that they hold the proper regulatory licenses required.

Ultimately I see New Tycoon Plus as just a scheme that’s been set up to make the creator wealthy at other peoples expense. It seems like everything you’re told on the website is just lies to draw you in, so I’d advise avoiding it.

Like I say I’ve seen several of these so-called mining companies prior to this one & none of them so far have turned out to be legit. They’ve just been flat out Ponzi schemes using the whole mining thing as an attempt to cover it up.

Whilst you could potentially make some money by investing, I certainly wouldn’t advise it because the risk is far too great. The likelihood is you will lose money not make it – and for that reason, I’d recommend you look into something else instead. To be honest there are many better ways to make a good income online such as affiliate marketing & with that you don’t even need to invest to get started with it. You can learn more about making money through affiliate marketing at Commission Academy if it interests you.

But anyway yeah, overall I’m going to be giving New Tycoon Plus a thumbs down & I certainly won’t be recommending it. If you do happen to have any further comments or questions about it though feel free to leave them below.

4 thoughts on “Is New Tycoon Plus a Scam? My Review Exposes This Crypto Mining Program!”