Rapid Profit Package is the name of a newly launched website that promises to provide you with access to a legitimate link posting job that could allegedly see you earning as much as $379 per day. 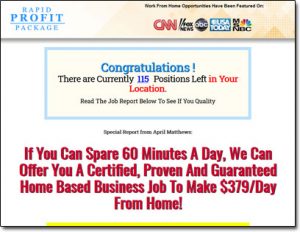 You’re led to believe that all you need to do to begin making money is simply sign up & then follow the instructions to post links online for various big companies such as Netflix, Oakley & Amazon.

But is Rapid Profit Package actually legit? Or is it just a scam website that’s somehow set out to part you with your time or your hard-earned cash?

Well, thankfully you’ve landed in the right place to find out because I’ve taken a closer look into it & in this honest Rapid Profit Package review I’ll be uncovering the reason why it WON’T work as promised.

And the good news is that I’ll be sharing what you can do instead.

What Is Rapid Profit Package?

Rapid Profit Package is a website that promises to provide you with access to a type of work-from-home job known as a link posting job. They claim that the job can even pay as much as $87 per hour.

According to them, all you need to do is simply sign up & post links online for companies such as Amazon & Netflix & they state that you don’t need any experience whatsoever to get started.

But of course, there’s a catch… And the catch is that you’ve got to hand over some of your own hard-earned cash in order to get started.

I mean, when have you ever had to hand over money to get access to a “job” in the past?

And the real reason they’re asking for cash is that their so-called “job” isn’t really a job at all. Instead, Rapid Profit Package is just a website that’s been designed to sell you on a dream & part you with your cash.

But I appreciate that given the fact it makes some extraordinary (and attractive) claims you may not just be wanting to “take my word for it” when I say that so instead, keep on reading & let me show you the proof.

And I’ll start by showing you how it really works…

How Does Rapid Profit Package Work?

So, the Rapid Profit Package website leads you towards believing that you’ll be getting access to some kind of “job” in which you’ll be paid directly in return for your time & efforts.

And they even have a calculator that lets you calculate your exact income based on how much you can work.

But it’s all complete BS.

Now, don’t get me wrong here – affiliate marketing is a legitimate (and excellent way) to earn money online, but it’s not a “job” by any means & you won’t get paid directly for your efforts.

You see, as an affiliate, you promote third-party products or services & get paid commissions on any sales you manage to generate… Which is great, but your income sure as heck isn’t guaranteed.

In fact, your success as an affiliate will be greatly dependant on the training that you follow because it is based on how effectively you’re able to actually promote the products or services online.

If you don’t know how to effectively promote things, you won’t earn a dime.

And the problem with Rapid Profit Package is that it doesn’t show you how to do any of that at all. Instead, it just gives you a basic insight into how affiliate marketing actually works.

So if you were to hand over your cash to sign up for Rapid Profit Package you’d just be left to feel disappointed with what you receive because ultimately, you will have been conned.

You were led to believe you were buying a “job” & that you will be able to begin generating income right away, but that’s not the case.

But there is some good news, which is that by following a legitimate training course (like my own course, Commission Academy) you can still earn good money online with affiliate marketing.

You just have to appreciate that you won’t earn it as quickly as the Rapid Profit Package scam claims you will.

So onto the next question…

Who Is Behind Rapid Profit Package?

This where things begin to get even more sketchy because on the Rapid Profit Package sales page you’re led to believe that the program has been created by a lady named April Matthews.

But then after hitting the “Get Started Now” button you’re taken to a checkout page that displays a video of some random dude sitting in his car claiming that he is the creator.

So the reality here is that you have absolutely no idea as to who is behind the Rapid Profit Package scam because “April Matthews” is clearly a fake name & the guy in the video fails to mention his.

And the reason the person behind has chosen to hide his (or her) identity is likely quite clear. It’s because they know that ultimately, it’s a con & they know that you’ll end up chasing them for a refund.

I write a lot of these types of reviews & even though I stress that the programs/systems (whatever I’m reviewing) are scams, I still get people reading them & then going on to try them out against my advice.

Well, generally because the claims are so bold. People think to themselves “oh, it might be a scam… but what if it actually works“.

They know they have a high chance of losing money, but they’re so desperate about the tiny potential chance of it actually being real that they sign up regardless (and end up getting burned).

So to try & stop you from doing that, I figured I’d highly some of the red flags in the hope that you can then see it is CLEARLY a scam & that you will definitely get burned if you do indeed join.

The first red flag is that the whole thing is simply way too good to be true. If you could really just post links online & earn as much as $379 per day working from home then everybody would be doing it.

And guess what? They’re not.

I mean sure you can earn money by posting links through affiliate marketing but there’s no way that you’re going to “easily” earn $379 per day right from day 1 like Rapid Profit Package promises you will.

Who’s the owner? Where’s the company based? How do you get a refund? What do you actually get access to if you buy?

The Rapid Profit Package offers no transparency whatsoever. It just sells you in on the dream of being able to earn lots of money really quickly with little to no work all from the comfort of your own home.

The Rapid Profit Package website makes several efforts to try & scare you into signing up really quickly without too much thought.

For example, they claim that only “115 positions are available in your area” & that you only have “10 minutes to sign up” when you land on the checkout page…

I actually came across the Rapid Profit Package scam last week but didn’t have time to review it until today & guess what? It’s still there, claiming those exact same things.

Is Rapid Profit Package a Scam?

The entire thing has basically just been designed to trick you into believing that you’ll be getting access to a legitimate work-from-home job but once you hand over your cash, you’ll find out that’s not the case.

All you really get access to is something extremely basic training that gives you nothing more than an “insight” into affiliate marketing.

Now, affiliate marketing is legit (and can certainly enable you to make good money) but the “training” provided by Rapid Profit Package won’t really show you how to get started. In fact, it’ll probably just confuse you even more.

So if you really want to build up an income online my advice would be for you to save your money, avoid Rapid Profit Package & instead just choose a legitimate course like my own course, Commission Academy.

Through Commission Academy, you’ll learn the REAL steps to get started (and make money) with affiliate marketing.

But either way, whatever you decide to do, I just sincerely hope that my Rapid Profit Package review here has given you a good insight into how the whole thing really works. I also hope it’s helped you to save your money.

Feel free to leave any additional comments or questions below.

42 thoughts on “Rapid Profit Package – Scam or Legit? My Review Uncovers How It Really Works”