RefreshEn is a newly launched program that’s been put together by a guy named Jason Fulton & it claims to provide you with a way to generate unlimited passive income streams online. 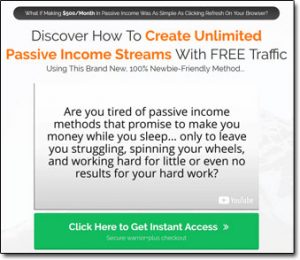 So what’s the deal? Is it actually legit or will RefreshEn scam you & just see you spending more money than you ever manage to make?

Thankfully you’ve landed in the right place to find out because I’ve taken a closer look into this program & in this review, I’ll be uncovering everything you need to know, including how it all works & whether or not you can really make money with it.

RefreshEn is one of the latest make-money programs to surface online & at first glance, it might seem like a dream come true as it’s creators claim that it can provide you with an easy way to create passive income online, even if you’re a total newbie

You’re led to believe that creating an additional income of $500 per month through the program is as easy as “refreshing your browser” & on top of that you’re told that you can get it all set up in just a mere 45 minutes or less.

To highlight the alleged potential the program also comes complete with a “Zero To $1,893” case study (and the creators claim that you can earn even more than that if you really wish)…

But as I mentioned at the start of this review it just all sounds a little too good to be true, don’t ya think? And as the old saying goes “if it sounds too good to be true then it probably is”… So what’s really going on here? Let’s take a look…

How Does RefreshEn Work?

The first thing I’ll point out is that whilst the program claims to be based on a brand new method, it’s not. The method simply consists of building niche websites (which they call “Passive Money Engines”), promoting them via Pinterest & then adding Google Adsense advertisements in the hope that the visitors from Pinterest will click on them & earn you money.

Now I’ll admit that the method itself does actually have the potential to make you money, but it’s certainly not new – and it’s certainly nowhere near as easy or as passive as they make it out to be.

The other problem I can see is that they claim no tech skills are required and that you can get it all set up in 45 minutes or less but as far as I’m concerned this isn’t true either. The method will see you having to buy web hosting, install a platform called WordPress & set up a website so I’d personally say that at least some level of tech skills are required… And if you’re new to doing all this it’s likely going to take longer than 45 minutes.

And that brings me onto the cost of it all…

Whilst yes, it is nice to see that the program does actually provide a legitimate method that could potentially help you make some money a big issue is that in reality, it’s going to cost you an awful lot more than $13.51.

Essentially that $13.51 fee is just an “entry fee” that gets you access to the first part of the program, which includes the following:

From there though you’ll be heavily pushed into purchasing a variety of upsells, which include:

So despite appearing to cost just $13.51, in reality following the program right through will see you spending around $241.51 which is a pretty big jump from the seemingly small “entry fee” in my opinion.

Can You Make Money With RefreshEn?

As I briefly touched on earlier in this review the truth is yes, there is some potential to make money through the method that RefreshEn teaches – however, there are a few important things you need to know…

Firstly, since the method requires getting web hosting, setting up a website, promoting it via Pinterest & monetizing it with Google Adsense it is clearly not as simple as just “refreshing your browser” as they claim.

Secondly, they make out like you can begin making money almost right away but again this is not true either. The way they tell you to make money is by adding Google Adsense to your website but Google requires your website to be active for at least 6 months before you can even submit an application to them…

Even then after 6 months has passed it’s still not guaranteed that they’ll accept you onto their program because they are very strict about who they let in.

And thirdly the creators of RefreshEn tell you that you should just use a method called “content curation” to get content on your newly created website, but essentially the way they show you how to do it basically just involves you copying other peoples content.

Not only is copying content & adding it to your website like that a poor approach, but it’s an approach that could see you getting into a lot of trouble.

Is RefreshEn a Scam?

The answer to that question is no, it’s not a scam but in my opinion, it’s pretty misleading & whilst you can potentially make money as a result of following their training, the likelihood is you will just find yourself disappointed at how it really works.

I mean if they were more honest & upfront on the sales page about what’s really going on & what it actually involves then I may have been able to give an entirely different verdict, but as it is, there’s just no way I could recommend the RefreshEn program to you.

It’s a shame really because if they had just sold the method for what it is then it wouldn’t be too bad at all, but ultimately the way they’ve put it all together with the hyped-up claims I just feel like they’re almost “tricking” you into handing over your cash… Not good.

Truth be told there are actually programs you can get started with for free out there that go over the same methods as RefreshEn and give you everything you need to get started online the REAL way, such as Commission Academy for example. Overall rather than paying money to sign up to RefreshEn I’d just recommend you sign up to a free-to-start program like that instead (and you’ll likely find you actually get much more value from it).

But anyway hopefully my review here has given you the insight you were looking for into this program & if you do happen to have any further questions or comments about it don’t hesitate to leave them below.

4 thoughts on “RefreshEn – Scam Exposed? Read My Review Before Handing Over Your Cash”