The Social Profimatic system is a newly launched money making opportunity that claims it will pay it’s members a whopping ROI of 8% per day on any investments that they happen to make via the site… Without them having to lift a finger. 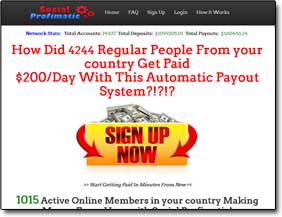 You’re led to believe that you can literally just make a deposit & begin earning the very next day without needing to do a single thing, but no doubt you’re pretty sceptical about the whole thing so what’s the deal?…

Is it actually legit or is Social Profimatic a scam that’ll just end up seeing you lose money rather than actually make it?

Thankfully if that’s what you’ve been looking to find out you can rest assured that you’ve landed in the right place as I’ve taken a closer look into the whole thing & in this review, I’ll be uncovering everything there is that you need to know including how it all works & of course whether or not you can really earn money with it.

Social Profimatic is an investment management website – or at least it claims to be. Through it you’re led to believe that you can make deposits & that the team at Social Profimatic will make money on your behalf by tactfully investing chunks of your deposit in their chain of social media businesses.

They claim that the profit made by their social media businesses gets divided up & paid out to their members every single hour, and they claim to guarantee a whopping solid ROI in total of 8% per day…

Now I appreciate that in percentages 8% might not sound all that great, but let me tell you that in the world of investing & ROI that figure is INSANE. It would mean that if you invested a mere £1,000 with the company that you would be earning around £2,400 per month which overall is a 240% monthly ROI…

It’s a pretty bold claim, to say the least, and if it were true then as you can imagine everybody would be doing it… But sadly it’s NOT true, and that’s the reason everybody isn’t doing it.

In reality, the whole thing is nothing but a mere Ponzi scheme & whilst there is the potential that you could make some money through the Social Profimatic opportunity, the likelihood is that you will not make much & that instead, you will just end up losing everything you deposit.

But obviously I don’t expect you to just take my word for that since I appreciate that you might have been really hoping that the whole thing was going to work for you, so instead let me show you exactly how it all works so that you can see for yourself what’s really going on…

How Does Social Profimatic Work?

As a newcomer to making money online the whole concept of Social Profimatic might seem legit – you deposit money, they invest it in their social media businesses & you get a share of the profits every hour… But to a person like myself who’s had a lot of experience with scams like these over the years, it’s easy for me to see what’s really going on.

Basically there is no social media business at all, and that’s why you’ll find or no proof or mention of it on their website. The idea of your money being invested into a social media business is just the creator’s attempt at making the whole thing seem legit, but in reality, the only new money coming into the company is the money that’s getting paid in by new investors.

So this means when you invest (which I don’t recommend you do) the money you pay in is getting paid out to the people who invested before you… Then for you to get paid you are relying on new people coming into the company after you… If they do, then a percentage of the money they invest will get paid directly to you…

But there are 2 big problems here… Firstly there is no guarantee that new people will come into the company after you so you could simply lose your entire deposit… And secondly, the whole thing is totally unsustainable so at some point the company WILL collapse & disappear.

Oh and actually there is another big problem too which is the fact that the whole thing is totally illegal… So if you get involved with it, expect to get in trouble.

It’s Designed To Make It’s Creators Rich, Not You…

The truth is that the whole Social Profimatics program, like with any Ponzi scheme, has been purely designed to make its creators rich… Not it’s members. I mean sure, some members who get in early may make a little bit of money from it but the reality is that most will just lose it & the creators will simply be cashing in at their expense.

For example, as you can see below after spending a couple of minutes on the site I was told that apparently 4271 regular people from my country had apparently been paid $200 per day from the Social Profimatic system:

However, after refreshing the page the counter immediately went back down to 4233 (as shown below)… Meaning the whole thing is just a fake counter that’s been put on the page to rush you into signing up. It’s what’s known as a scarcity tactic & it’s a common trick used by scams.

You have to ask yourself why would a legitimate website need to employ fake tactics like this to get people to sign up? The answer is easy – because it’s simply not legitimate… Like I say the whole thing is a scam.

The Biggest Red Flag of All…

Whenever I look into a new money-making opportunities there is always one thing I look for straight away & that is who is behind the company… Do they make themselves well known to you? Do they give you an office address or way of contacting them?

Anonymous domain registration, no contact details on the website, no mention of who runs the show & no office address to be found. Also since it’s an investment program it needs to be licensed & you guessed it… No license either.

It’s basically safe to say that it does not look good at all.

Is Social Profimatic a Scam?

Well technically you could potentially make money by investing through the Social Profimatic website, but since it shows all the signs of being a typical Ponzi scheme the chances are that you will much more likely LOSE any money that you invest instead… So for that reason, in my opinion, it’s a scam yes.

I mean come on, it promises insane returns of 8% per day without you having to do anything at all… That’s just totally unrealistic – there is no “push button” way to make that kind of money without actually doing any work. If there was then nobody would be left working a job…

But anyway with regards to the Social Profimatic program itself it’s safe to say I won’t be recommending it. Like I mentioned above the chances are you will just lose money through it, not make it… And I don’t believe it will provide you with any real value.

So hopefully this review helped you out & gave you the insight you were looking for into the Social Profimatic system, but of course if you do still happen to have any further questions or comments then don’t hesitate to leave them below & I’ll do my best to get back to you as soon as possible.