Sweatcoin is a new cryptocurrency & through the Sweatcoin mobile app you can allegedly rack up free coins just by walking around. The app keeps a track on your GPS & walking activity, then your steps get converted into Sweatcoins. 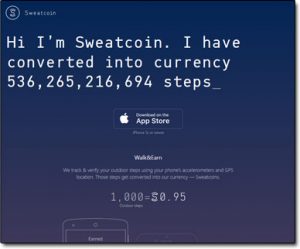 These coins can then supposedly be traded for things like clothing, experiences, goods & services & even products like Apple watches & iPhones…

But is Sweatcoin legit? Or will you be breaking a sweat for nothing?

That’s the question a lot of people have been asking but thankfully you’ve landed in the right place to find out because I’ve done the digging & in this Sweatcoin review I’m going to be uncovering everything you need to know… Including whether or not you can really make money with it.

You see Sweatcoin offer a mobile app which when downloaded to your phone tracks your GPS & your walking activity. If you activate the app & sign up to Sweatcoin then you’ll begin earning Sweatcoins simply by walking around.

However, the important thing to note here is that your activity does have to be outdoors, that’s why Sweatcoin needs access to your GPS – to determine whether you’re inside or out. So any walking around inside that you do won’t be counted, instead, your Sweatcoins will start racking up once you step outside.

How Does Sweatcoin Work? 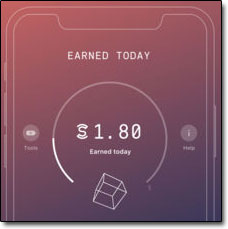 Honestly, the Sweatcoin app is actually super simple – and the good news is that it’s entirely free. To get started with Sweatcoin you just need to download the app to your phone, enter a few details about yourself & then you’ll be good to go…

You can start racking up Sweatcoins (also known as SWC) the very same day you download the app – all you need to do is head outside & start walking. The app runs in the background & it will automatically start tracking your activity once it detects you’re outside.

You’re also presented with the opportunity to earn an additional SWC each day by logging into the app & watching an advertisement. This is optional, but it’s certainly a lot easier than walking an additional 1,000 steps.

Sadly though if you think this app is going to see you to riches then think again. Sweatcoins are not directly exchangeable for cash & also their value isn’t so great. It will take a LOT of walking before you can claim anything even remotely worthwhile through the app.

But of course, I’m not going to knock it because essentially they’re paying you for something you would likely be doing anyway so you can’t really complain…

If you share the app with your friends you’ll also get 5 free Sweatcoins for every one of them that signs up too. As far as I’m aware there’s no limit on this either so if you’re popular then this could potentially be a pretty good way to kick-start your SWC balance.

What Can You Get For Sweatcoins?

This bit will likely be the make or break for you, and I know for many it will likely be the break. Whilst Sweatcoins is a pretty cool app in concept, as you can imagine it’s not all that rewarding… In fact, as you’ll see in a moment some of the “offers” don’t really seem like offers at all.

So yeah, firstly as I mentioned above you can’t directly exchange your Sweatcoins for cash which is the biggest bummer, but that’s kinda the “catch” because the app generates revenue from advertisers & so you’re forced to pick “offers” from them instead.

Here are some example offers that I’ve seen within the app:

So yeah, as you can see some of those “offers” don’t really seem like such great deals to me because despite having racked up SWC you still have to end up putting some of your own money towards them…

Well except for the home workout subscription at least, but the problem with that one (and the other subscriptions like it) is that they require your credit card details so if you end up forgetting to cancel then you’ll actually end up losing money rather than making it.

They do provide some better things like real gift cards & PayPal withdrawals but these take a LOT of Sweatcoins to access. And when I say a lot I really mean it – it would likely take you a whole year of walking 10,000 steps per day before you’re able to cash out the $50 they offer through PayPal.

It’s safe to say that you’re not going to get rich with this app!

And that brings me onto the other not so great stuff…

Before I run over some of the complaints people have been mentioning about Sweatcoin the first thing I want to point out here is that the app is free, and that essentially they’re giving you bonuses for stuff you’d likely be doing anyway… So whilst there are indeed some complaints about Sweatcoin I think it’s pretty fair to say that it’s not all bad.

But anyway yeah, here are a few of the things people have been complaining about…

Well, I’m confident in saying that the app is definitely legit, however, whilst it’s a good idea in concept & could be a pretty good app down the line, I don’t think at this moment in time I’ll be personally recommending it.

The main reason for that is simply because it seems far too difficult to earn anything truly rewarding and on top of that many of the rewards that you do get access to don’t really seem like rewards. They actually seem more in favour of the advertisers than the users of the app, such as the $75 gift cards for example which require a minimum spend of $150 etc…

Also, there’s a big problem in my opinion with the “free” subscriptions that are offered through the app. I agree that it’s good to get free access to something even if it’s just a month or so but the issue is that you have to provide your credit card details & you’ll end up getting billed if you forget to cancel.

One forgotten subscription could set you back a whole year (or more) of walking with Sweatcoin… I personally, therefore, wouldn’t touch these subscription-based offers with a bargepole (and wouldn’t really recommend you to).

But yeah overall as far as I’m concerned & based off the other Sweatcoin reviews I’ve found online the app definitely seems legit so if you are an avid walker then, by all means, try it out but just don’t expect the world.

Anyway, whilst hopefully this review provided you with all the insight into this app you were looking for if you do happen to have any further questions or comments please do feel free to leave them below.