Traders Vendetta 2 claims to be a Forex trading software that will allegedly change your life & it leads you into believing that you’ll be able to easily generate a whole load of cash online through automated trading. 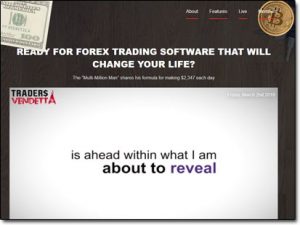 You’re told that the system will be able to generate you as much as $2,347 per day – but is it actually legit or is Traders Vendetta 2 a scam that’ll just ultimately see you losing money rather than making it?

Thankfully you’ve landed in the right place to find out because I’ve taken a closer look into this system & in this review, I’ll be uncovering everything you need to know, including how it all works & whether or not you can really make money with it.

What Is Traders Vendetta 2?

Traders Vendetta 2 is an automated trading system & it claims it can generate you profits on complete auto-pilot. You’re led to believe that all you need to do is sign up, deposit some money & that the system will then begin making you money…

It certainly sounds nice in theory, but as the name suggests this is actually the second version of the software & I can tell you that the first version (which made similar claims) was a huge failure.

Every single member of the original Traders Vendetta program reported that they lost money. Despite the system claiming guaranteed profits, it seemed that not a single person actually made any money with it…

So is it? Or is Traders Vendetta 2 legit?

I can tell you right from the off after taking a closer look into this program that sadly Traders Vendetta 2 is just another scam. It’s a binary options scam & it’s set out to do nothing other than part you with your cash to make its creators and the brokers associated with it wealthy at your expense.

But I don’t expect you to just take my word for that, instead let me show you exactly how it all works (or should I say doesn’t work)…

How Does Traders Vendetta 2 Work?

Okay, so the Traders Vendetta 2 program leads you into believing that you’re going to be able to make lot’s of money really quickly & easily, but sadly, in reality, this isn’t going to be the case.

The whole thing is actually just a ploy to trick you into signing up with the “recommended” binary options broker so that the creator of the program can earn themselves a huge commission at your expense.

Then, when you finally get access to the system after depositing you’ll be left to find out the hard way that the system doesn’t work as promised. Instead of making profitable trades, you’ll see that it actually makes nothing but losses.

But the problem doesn’t end there…

You might think that it’s not the end of the world and that you’ll just be able to withdraw your cash & cut your losses… But nope. The brokers these guys “recommend” or should I say force you to deposit with are unlicensed rogues.

If you deposit money through this system you ain’t getting it back. They’ll either ignore your withdrawal requests, outright deny them or “accidentally” activate the trading software again which will cause all your remaining funds to disappear completely.

The whole Traders Vendetta 2 website has just been designed to lull you into the false sense of security of thinking that you’ll just be able to “try it out” without any real risk to your money, whereas the complete opposite is true.

It’s a very clever scam – but sadly it’s a scam all the same & if you “try it out” you’ll lose any & all of the money that you deposit.

Obviously the best thing to do is just steer clear of it. I’ve seen several of these systems before, like the Crypto Trade Book for example & they’re nothing but bad news – sadly though many people get drawn in.

The best way to stay safe from these types of things is just to simply understand that there’s no such thing as easy money, and to stop trying to get-rich-quick. As the saying goes, if it sounds too good to be true it probably is & that definitely applies here with the Traders Vendetta 2 system.

Step Back & Take a Reality Check

I appreciate the fact that it’s easy to get drawn in by the thought of being able to earn lot’s of money quickly & easily online, but when you’re presented with an offer like this it’s important to step back, look at the facts & take a little reality check.

I mean think about it, take a look at this quote pulled directly from the Traders Vendetta 2 website:

I mean come on, that’s just ridiculous. If that were true & the system could really generate results like that for anybody who signs up then tell me why are people still working jobs? Why hasn’t this been featured on the news?

If it were true, the world would be in crisis… Everybody would be quitting their jobs…

Obviously the reality here, like I say is that it’s completely fake – and hopefully, you can see it now that you’ve stepped back & thought about it.

It’s a nice dream but that’s about it… As I mentioned above they just prey on the fact you will “try it”, then boom that’s your money gone.

Is Traders Vendetta 2 a Scam?

Yes of course it is, the program is actually no different to the original Traders Vendetta that launched late last year – they’ve just launched it under a new name in an attempt to part more people of their cash.

This system has been designed for one reason & one reason only, which is to make the creators behind it wealthy at your expense. They don’t care about you or your success, they just want to line their pockets.

Like I say the whole thing is just a ploy to trick you into depositing with the “recommended” unlicensed broker so that the creator of the system can earn himself (or herself) a big fat commission.

The truth is there are many legitimate ways to make money online & there are good programs that you can get started with like Commission Academy for example, but this Traders Vendetta 2 program is just total BS.

So overall it’s safe to say that I won’t be recommending it – I’ll actually be doing the opposite & advising that you avoid it. If you do happen to have any further comments or questions about it though feel free to leave them below… I just hope you read this review before depositing.