In most of my reviews, I usually explain how systems work & then give you a verdict as to whether or not I recommend them but that’s not going to be the case here with the Affiliate Millionaire Club. 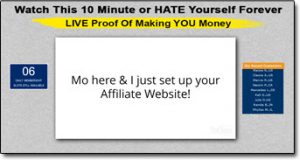 That’s because it’s obvious to me that the Affiliate Millionaire Club system is an outright scam so I want to warn you right from the off that you should definitely avoid it. If you’d like to know more about exactly how the scam actually works stay tuned as I’ll explain that to you below.

But first, let me make it clear that I’m not affiliated with the Affiliate Millionaire Club system in any way shape or form (as you’ve probably already guessed since I’ve just called it out). I just want to reaffirm that so that you can rest assured that you’ll be getting the real truth about this system from an “outsider”.

How Does The Affiliate Millionaire Club Work?   |   Is Everything You’re Told a Lie?   |   The Bottom Line   |   A Better Alternative

How Does The Affiliate Millionaire Club Work?

Well firstly let’s just clear up the fact that technically it doesn’t work – that is, in the sense that you won’t make any money at all as a result of buying into the system.

The Affiliate Millionaire Club is actually nothing new, it’s an old scam that I’ve seen before under several different names (like the Online Profit Shortcut system) & to be honest I thought it would have stopped working by now but clearly not…Sadly the creators are obviously still managing to part people with their hard-earned cash.

The scam itself isn’t all that technical – they’re basically just giving you a whole bunch of hype & making it seem like you can easily make money without doing anything by buying into the system. “Mo” who is supposedly the creator of the system claims that after you’ve paid the $47 buy-in fee he’ll create you a money-making website that will generate you cash without you having to even do anything at all.

Of course, if this were true then everybody would be doing it – I mean just look at me right now, for example, I am putting effort into my website by writing this review. If a robot or system could do it for me I’d let them do it rather than spend my own time doing it but it’s simply not possible.

Whilst the internet provides you with a great platform to make money but it’s not magical – yes you can make money from a website, yes it’s easy to set a website up but overall it’s going to require work on your part for you to bring it to a stage where it’s making money.

Is Everything You’re Told Just a Lie?

Whilst the majority of the Affiliate Millionaire Club system is built upon lies there are a few truths to what you’re told.

Firstly, as a result of paying $47, you will get a website – but it will be nothing exciting, nothing unique and it certainly will not make you any money. The truth is that everybody buying into the Affiliate Millionaire Club system is getting the EXACT same website (if you can even really call it a website).

You just won’t make any money as a result of paying $47 to the Affiliate Millionaire Club scam, because as I say – it’s a scam!

Once you’ve paid the $47 you’ll be provided with a bogus website that will update itself with content created by robots – but the content is totally bogus (and copied) so basically you’ll have a website that’s just full of garbage text. You’ll be led to believe that the content will get ranked by search engines & that visitors will start coming, making you money as they purchase things through your affiliate links.

This could certainly work if you created the website & the content yourself – but there is NO way that search engines will rank copied content created by robots. As I said above if it was possible/feasible to do things this way then everybody would be doing it, but it’s not hence why I am writing this review by hand.

Then, once you’ve parted with your cash & you realize you’re not making any of the money you were promised you will naturally try & obtain a refund, only this is the point where you will realize you’ve been scammed as the creators of the system make it nearly impossible for you to get your funds back.

You can also tell it’s fake just by refreshing the website – that’s because if you take a look at the “Daily Membership Slots Still Available” & “Recent Customer” sections you’ll notice they count down to pressure you into signing up but go back to default once you refresh the page. They’re fake!

I think you can already guess what it is – avoid, avoid, AVOID!

The Affiliate Millionaire Club is a system that’s set out to do nothing other than part you with your hard-earned cash & it’s not worth a moment of your time. If you really want to learn affiliate marketing then I recommend you try a reputable program like Wealthy Affiliate instead where you’ll learn the real way to make money online.

All I can say is that hopefully, I managed to prevent you from parting with your hard-earned cash & giving it to the crooks behind this Affiliate Millionaire Club scam. If you still happen to have any questions or comments feel free to leave them below & I’ll do my best to respond as quickly as possible.