Somehow, a few days ago, I happened to stumble across the Azha Trader 6 program. 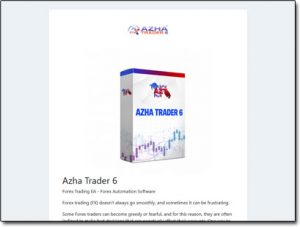 And in short, it claims to be a piece of Forex automation software that can enable you to become a profitable Forex trader from day 1.

(their words, not mine)…

According to the description of it, the software uses some preset rules to make profitable trades & you’re led to believe that you can essentially just sign up, activate it & start making money.

But can you really?

Or is Azha Trader 6 a scam that you should avoid?

Well, after taking a closer look into it I discovered something really alarming & in this honest review of Azha Trader 6 I’m going to be uncovering exactly how it all really works.

What Is Azha Trader 6?

Azha Trader 6 is a paid-for piece of trading software that automatically opens and closes trades based on preset rules in an effort to (ideally) keep you profitable by mitigating losses.

And as per the claims made by the software’s sales page, it can allegedly enable you to “automate the process of trading, spend less time on charts, and allow you to be profitable while you work at your job, your business, or simply out enjoying your personal life”.

Plus, you’re even led to believe that the software can enable you to become profitable right from day number 1.

But that’s a pretty bold claim.

In fact, they’re all bold claims… And in reality, it’s all complete utter nonsense.

For a start, if it was really as easy to make money with Azha Trader 6 as those selling it to you claim it is, do you really think they’d be focusing their efforts on “selling it”?

I think not. Instead, they’d be focused on using it for themselves…

And rather than using it for themselves, they’re putting out various marketing campaigns (and spending money on advertising) to try to get other people to buy into it.

So, what does that tell you?

It tells you that it quite clearly doesn’t work as advertised & it actually gets worse (far worse, in fact). I’ll explain why in a moment but first, let’s take a closer look at who’s actually behind the Azha Trader 6 scam.

Who Is Behind Azha Trader 6?

Despite the software costing over $2,000, the sales page for Azha Trader 6 contains very little information about the product other than a short (hyped-up) description & a small link to a Facebook group.

Especially as clicking on the Facebook link takes you to a page that has now been suspended. 😳

Both of which, by the way, have no traceable forex or investment experience.

And then there appears to be a third person involved, Gregory Perdriel, who is in charge of the marketing as per the comment below:

But founders aside, let’s take a closer look into how it all actually works…

How Does Azha Trader 6 Work?

Well, after doing some extensive digging I was able to discover that essentially, Azha Trader 6 is just a free piece of auto trading software that is being repackaged & sold under a different name for $2,000+.

The *actual* software, named TSR 2.0, was created by a man named Muhammad Zafar Joyia – and for proof of that, you can check out the comments of this forum thread (specifically the post by @aesjersey on Jan 18, 2021).

You’ll that the user @aesjersey actually reached out to the original creator of the software for his comments & he confirmed that it is his free software, but being sold for an expensive fee.

So, this means that if you do buy Azha Trader 6, you will get access to an auto-trader as promised…

But it’s certainly not going to change your life.

And it’s going to be VERY unlikely to actually generate you “automated profits”.

Instead, all your purchase would do is line the pockets of the 3 guys that are behind the Azha Trader scam… And, of course, the shady affiliates (like David Dekel) that are actively promoting it to others.

You see, as mentioned further up in this review, Azha Trader also comes coupled with an affiliate program, meaning that people can sign up, promote it to others & then earn commissions from any sales.

And that’s how people are really making money with Azha Trader.

First, there are red flags surrounding the sales page of the software.

The website, for example, is currently showing a “paused account” banner (meaning the owners haven’t paid their bill):

And if you try to visit any other page, even the Firefox web browser gives a warning about the site:

Then there’s the fact that the sales page gives very little information away about how the trader actually works, other than attempting to tell you that it can “change your life” by making automated trades.

But aside from the sales page, a quick look at the Facebook profiles of the software’s owners also raises additional red flags.

For your viewing pleasure, here are the links to their profiles:

As you will see, their profiles are simply packed full of images that showcase their alleged wealth. They post regular pictures flaunting their earnings & claim that it’s easy for you to do the same.

Classic “fake it until you make it” scenario.

Is Azha Trader 6 a Scam?

Well, Azha Trader 6 is essentially just a piece of free auto-trading software that’s been repackaged & being resold for $2,000+.

Does that make it a scam? Hard to say.

But, in my opinion, what DOES make it a scam is how it is being promoted. The guys behind are essentially just promising that you will begin generating automated profits immediately after handing over your cash.

And that simply couldn’t be further from the truth.

I mean sure, if you purchase Azha Trader 6 & let it run a few trades then you may indeed turn a few profitable ones… But it’s going to be much more likely to generate losses overall.

You see, if there was really such software that you could just “switch on and profit from” then everybody would be using it. Nobody would be left working a job & the world would be in crisis.

But it’s simply not possible for such a system to ever exist.

And if somebody claims that their system can provide you with a guaranteed (or even “easy”) way to make lots of money in a short space of time then the reality is that they are just trying to scam you.

So, do I recommend Azha Trader 6?

Instead, if you truly want to earn money online I would suggest that you stick with a method that doesn’t involve risking a large chunk of your funds in investments, such as affiliate marketing.

Through affiliate marketing, you can earn just as much (if not more) as you can with Forex trading, yet the cost of entry is much, much lower. In fact, you can actually get started at no cost whatsoever.

If you’d like to learn more about that, be sure to check out my free guide right here.

But whatever you decide to do, I just hope that my honest Azha Trader 6 review here has given you a good insight into what you can really expect from the software & most importantly, I hope it’s helped you to save some money.