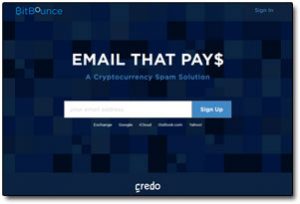 Yes that’s right – BitBounce is a service that has been supposedly been designed to put an end to email spam, and it does that by asking people for Bitcoin payments if they send you an email & haven’t been added to your whitelist. So it’s not really a scam, but it is a pretty freaking crazy idea…

And it’s pretty darn annoying too! But anyway, in this BitBounce review I’m going to be uncovering everything there is you need to know about the service & determining whether or not you can actually make any money from it, or find any real use for it (without making everybody who sends you emails wanting to kill you).

As mentioned above BitBounce is a relatively new company that launched with the aim of protecting people from email spam, or at least that’s what they claim. So far it seems they’ve been more successful at annoying millions of people all over the world than they have at preventing spam.

The BitBounce spam filter is quite unique, in that rather than using technically advanced filtering to merely block out spam & move it to a different folder, they simply send automated emails to people who want to contact you asking them to pay you…

Now there’s a few fundamental flaws with this, but before I run through those with you take a look at the image below. This is what you’ll see if you send an email to somebody who’s using BitBounce & you’re not yet on their whitelist: 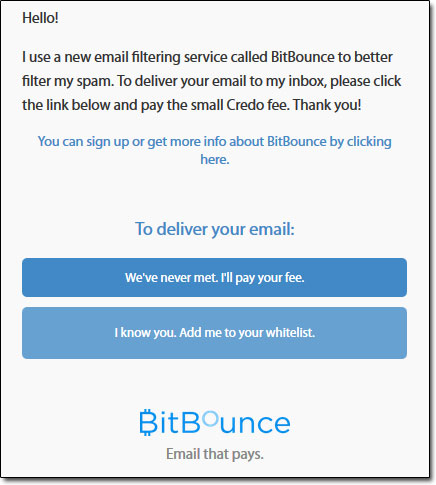 Okay, so the fundamental flaws…

Well firstly it’s FREAKING ANNOYING. I’ve fired off emails to a few of my contacts lately only to discover a few hours later that they didn’t actually receive them & that this bad boy was sitting in my inbox instead.

Naturally I clicked “I know you. Add me to your whitelist” and the email went through, but even more annoyingly when they replied & I responded again I GOT THE BITBOUNCE MESSAGE ONCE MORE. As you can probably tell it really wound me up, heh.

But honestly this has happened on multiple occasions – no matter how many times I click “Add me to your whitelist” it seems that nothing is happening, I keep getting the same old annoying message… So yes, flaw number 1 (and kinda 2) is that it’s annoying & that the whitelist button doesn’t seem to work.

The fact that’s it so annoying is actually what spurred me on to write this whole review today.

Anyway, other than that – the other flaw is ummm… the whole thing! Yes, the whole thing is massively flawed… I mean come on if I (or you) were trying to send a spam email to somebody we’d just click the “I know you” button right?

I mean which spammer is going to see that message and think “oh damn, they got me… I’ll have to pay them”????

None of them, ever…. Unless it’s one of those Nigerian Prince spammers who is sitting on 100 billion pounds & waiting for somebody to help him transfer it out the country… I mean he’d probably be able to afford a few BitBounce emails right? Heh.

Well to be honest it’s pretty simple, you just head to their website & enter your email. The service currently directly integrates with Exchange, Google, iCloud, Outlook & Yahoo so it’s pretty easy to setup.

Once it’s setup you then merely hope to be spammed. Yes, essentially with this service you WANT to be spammed, because unless you’re getting spammed then you’re not going to make any money.

So realistically this is the only spam email service which you would hope increases your spam, LOL.

Anyway if any of the spammers that are trying to contact you do decide to make a payment to you after receiving the BitBounce email then it will go directly into your CoinBase wallet in the form of Bitcoin.

I don’t even know why it’s a thing?

My guess is that it was probably just an excuse to create an ICO so that they could generate a whole bunch of cash by releasing some coins for a service which to be honest is pretty naff. ICO’s are the big thing at the moment and everybody is getting excited about them & willing to throw money at them in the hope that they’d be able to make millions by investing in a cryptocurrency startup…

I guess some people, somewhere in the world thought this was a good idea?

Is BitBounce a Scam? The Bottom Line

If I could sum this company up in one short sentence it would be “how is this even a thing?” because honestly, I have no idea how this company actually came about to the stage that it’s at now. Surely somebody at some point of the process must have thought to themselves hang on a minute, isn’t this just the worst idea ever?

And to be honest I kinda thought that maybe I was the one who was overlooking something here. I mean could the idea really be that bad? So I started looking for reviews elsewhere too just to double check & it turns out that I’m not alone in my thoughts.

Take a look at these reviews of BitBounce from their public Facebook page:

So yes it does seem that most other people think along the same lines as me too which is refreshing. The idea is so silly that it almost made me start thinking that I was the crazy one here for not believing in it…

However I suppose there are some good uses for BitBounce, such as:

Other than that, yeah I really don’t see the point of it. And to answer the question in the title in the title of this review, is BitBounce a scam? The answer to that is no (at least not in terms of their emails – though there does seem to be some questionable things going on with the ICO), but honestly it’s just a totally flawed concept & if you think it’ll turn your spam into cash, think again because chances are it won’t.

There are many, many better ways to make extra money online & you can see a huge long list of them all by clicking here.