Bitcoin seems to be gaining more & more interest by the day as it’s price just seems to keep on rising – but with all the hype surrounding Bitcoin we’ve started to see some “questionable” systems launching promising easy untold riches by making investments in the digital currency. 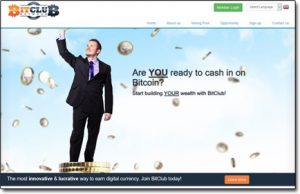 One particular system that’s attracted a lot of attention recently is a system named BitClub Network, which claims to provide the most innovative & lucrative way for people to generate profits through Bitcoin investing.

However, whilst at a glance, the BitClub Network may seem like a genuine opportunity there have been several people who claim they’ve lost money through the scheme & some have even stepped forward to call it an outright Ponzi scheme.

And when it comes to Bitcoin opportunities there are a LOT of Ponzi’s about so you have to tread extremely carefully – just recently I reviewed a company named Jetcoin which turned out to have a very questionable business model indeed.

So for that reason, I’ve decided to personally take a look into the BitClub Network opportunity to find out what it’s all about, if it’s legit & whether or not it’s something I feel you should be getting involved with (or staying away from).

Meaning if you’ve come across the BitClub Network & you’re trying to find out if you can actually make any money with it then you’ve landed in exactly the right place to find out as I’m going to be revealing literally everything you need to know right here in this review.

What Is BitClub Network?

With the price of Bitcoin seemingly ever-increasing it’s possible that you could make money simply by purchasing Bitcoin & sitting on it in the hope that the price continues to go up.

However, whilst that would obviously an extremely good investment (if it did continue to rise) – companies like the BitClub Network claim that they can help you make even more money from the currency.

BitClub Network actually states in their sales video that if you get involved with their opportunity you could expect to hold 2 to 8 times more Bitcoin in 3 years time than if you were to simply invest & sit on Bitcoin alone (a very bold claim since in real money terms that could potentially mean you would make around $80,000 more).

How Does BitClub Network Work?

BitClub Network claims to own what’s known as a Bitcoin network mining pool which they say is based in Reykjavik Iceland. By joining the BitClub Network you are told you’ll be given a share of the coins that are mined from this pool, thus increasing the overall number of Bitcoin you hold & helping you build a larger income over time.

Bitcoin is a peer-to-peer digital currency, and the currency is automatically issued/regulated by maths problems.

So nowadays it’s not really feasible for somebody to mine Bitcoin on their own – instead, people are coming together & building mining pools which is where they are basically investing in hardware as a group & building high powered data-centres that are mining Bitcoins.

Then when they mine a coin they share the profits out between all of the investors in the pool.

In this sense it’s legit – however many companies are cleverly using these “mining pools” to cover up what is really a recruitment Ponzi scheme, and I’m worried that’s potentially what’s happening here at BitClub Network.

When you combine Bitcoin with recruiting things start to get very shady and borderline illegal. You see since Bitcoin is unregulated (as it is not government-controlled) it’s given a lot of people the freedom to pretty much do what they want & as a result, we’ve seen a lot of scams/Ponzis come to surface.

And if you don’t know what a Ponzi is, it’s basically where the company relies on investments made by new members coming into the scheme to pay off the people who are already in the scheme. Obviously, it’s an unsustainable business model & eventually people come to lose money (which is why they’re illegal) – it’s basically one of those where only the people who got in early make money whilst the rest end up suckered out of their hard-earned cash.

So, when it comes to BitClub Network, here’s the deal…

They mention that you do not need to recruit in order to profit from the opportunity – however, don’t let this fool you into thinking that it’s definitely not a Ponzi, because you can still profit from a Ponzi even if you do not recruit… You simply need to rely on other people bringing new members in to pay off your investment.

Remember – in a Ponzi if new people stop coming in you LOSE your money, so always do thorough research.

They do however operate a recruitment scheme through which you’re told you can increase your earnings even further by inviting new people to the scheme & this is where it all starts to get very “questionable” to say the least.

Usually when Bitcoin & recruiting are involved my advice is to stay away… In my personal opinion, it’s simply not worth the risk – you could lose your money, go to jail, or potentially both!

The difference with BitClub Network compared to the likes of Jetcoin is that BitClub Network claims to run a mining pool & they claim that you are not investing in Bitcoin, you are purchasing technology in their data-centre and the profits are coming from the mining operation.

If that statement is true, then yes it’s legit – however, if it’s not (which many are claiming it isn’t) then it’s not legit & I would highly advise you stay away.

Is BitClub Network a Scam?

In my personal opinion when an opportunity involves both Bitcoin & recruiting it raises major red flags as it comes into very close territory of potentially being classed as a Ponzi scheme, somebody I nor you would wish to be a part of.

For that reason, I will not be recommending BitClub Network as an opportunity you should join since in my personal opinion it’s far too risky. I appreciate they are claiming that you are purchasing equipment in a data-centre as opposed to investing in Bitcoin (which would potentially make it legit) but there’s been a lot of complaints that those are flat out lies.

Again whether you’re purchasing technology or not it still involves Bitcoin & it still involves recruiting – combine those 2 and no matter what opportunity you’re in you’re pretty much asking for trouble. All you need to do is run a search for the likes of MeCoin or MrCryptoCoins & see how those went…

The bottom line is that if you’re looking to make money from Bitcoin do it the proper way & don’t get greedy. Join a proper, reputable investment network – invest in Bitcoin & hold on to them as long as you think they’re going to increase in value. Stop messing about with these naff opportunities – just my 2 cents.

And on that note, if you have any further comments or questions then feel free to leave them below & I’ll do my best to respond as quickly as possible, but hopefully, I covered most things already in this review.

4 thoughts on “Will BitClub Network Really See You Cashing In On Bitcoin Or Is Yet Another Investment Scam?”