The car wrap advertising scam – it’s a new one on me, and it was just by chance I happened to come across it after reading a report written on Commission Academy from somebody who’d, unfortunately, fell victim to it & lost $100 of their hard-earned cash as a result… 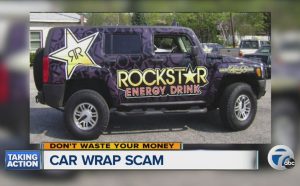 But just what is the car wrapping scam? And how does it the scam actually work?

Those were the exact same questions I had after I first heard about it so as a result, I decided to put this blog post together to share what I’ve learned about it & more importantly to help others avoid it.

So if you’ve had somebody approach you claiming to be from a company like Rockstar Energy that’s promising to pay you handsomely for wrapping your car with advertising & you’re wondering whether or not it’s legit, be sure to read this entire post before you take action… Because sadly, it’s likely not (and it could end up costing YOU money)!

What Is The Car Wrapping Scam?

The first thing I have to say about the car wrapping scam is that it is VERY convincing and as simple as it is, due to its variance I’d say it’s probably one of the most convincing scams I’ve ever seen… And trust me, I’ve seen a lot!

So how does it work?

Well basically it involves somebody approaching you with the offer of an opportunity to earn some money by wrapping your car with some advertising – and the money offered as mentioned above is usually pretty handsome.

You’re probably talking an offer of $250/week or more – sometimes even as much as $750/week, but usually not more than that as an “insanely” high figure (even though $750/week is still pretty darn high) is likely going to 100% raise suspicion.

And it seems legit so far right? It’s pretty easy how this could result in a mutual gain… You get paid, and in return the company/person paying you the money gets prominent advertising on your car which is seen by hundreds or even thousands of people as you drive around.

But here’s the catch…

The person who reached out to you after discussing the deal & making arrangements (allegedly) will then tell you that they’ll be sending you a check – and they’ll likely also state that the check will pay you an extra week or month in advance as well.

By this point you might be sceptical – you might think “nah, this can’t be real“… But then boom – a few days later, as promised the check will arrive at your address.

And also as promised it will likely have the following week or month included in advance, so basically it’ll be a pretty darn nice check to cash.

Still, with some scepticism this is where you’ll likely then head to the bank – expecting the cheque to simply bounce or to be told by the clerk that it’s a fake. However, this is where things get interesting because the cheque doesn’t bounce.

Or importantly – it doesn’t SEEM to bounce at least.

So your next step here as instructed by the person that contacted you is to arrange the wrapping of your car. He or she whoever has contacted you will ask you to forward a small amount of the money that was paid to you onto a 3rd party to begin the wrapping process. You’ll likely be told that the 3rd party is either a graphic designer or the car wrapping company themselves…

Either way all up to now it’s still seeming pretty darn legit, and considering the fact that it now seems like you’ll be getting easy money each week/month for driving around in a wrapped car, sending a mere $100 or so to a “graphic designer” likely won’t seem like such a big deal… Especially not after cashing that big fat check.

But It Doesn’t Begin – You’ve Been Scammed!

Yep, sadly shortly after sending off the money to the 3rd party, you’ll be left to discover the hard way that you’ve actually just been scammed & that the whole car wrapping thing was just a big con.

The cheque that “appeared to clear” didn’t really clear as such – it merely boosted up the “pending balance” of your account to make it seem like it cleared – and in a few days, this will merely disappear when the bank realizes that it’s not actually good for anything.

This means that when the money from the cheque disappears from your account you might expect the $100 to return too, but nope – it won’t. You got caught out & you sent your own cash to a 3rd party.

The truth is the money you sent never had anything to do with the cheque at all, as that was still pending – and this means if that you do get caught out by this type of car wrap scam then it’s unlikely that your bank will be able to help you to get it back.

I mean sure – the scammers have committed a crime, but unless they’re caught by the authorities and hand back over the money they took (which is unlikely to happen), as far as the banks are concerned in these instances you made the payment yourself… And that often prevents you from getting any compensation.

Banks (from my experience – touch wood) are GREAT at helping when money is taken from your account without permission, but in the instance that you make the payment yourself, they often don’t really want to know.

“You made the payment, you should have done your due diligence – we’re sorry but we can’t help“… That’s the usual spiel.

However whilst the car wrapping variation is pretty new, the scam itself is not…

Whilst this scam is now being called the car wrap scam (for obvious reasons), the actual scam behind it – the art of sending a dud cheque & getting the victim to forward money is known as an advance fee scam, and these scams have been around for years.

It basically involved somebody wanting to buy your item but only being able to pay by cheque. More often than not they’d be from abroad & they’d offer way more than your asking price on the condition that you are able to send the item abroad. Of course, they claim they’ll be able to cover the cost of that too.

Then to trick you into sending the item before the check clears they’ll come up with some sort of story – usually of their upcoming child’s birthday which means they require the item posting ASAP. Often they’d even claim that their child was poorly or something to pull on the heartstrings of their victims, but it’s unlikely that in reality they even have a child, let alone a poorly one.

Anyway, in the instance of this scam, it is exactly the same. They merely hope that you’ll be “carried away” with the large amount they’re offering & that you’ll send the item off ASAP as requested to make sure the deal goes smoothly so that you get yourself a large payday in return for the item you’re selling.

Sadly though the same story will occur – the item will get posted, then a few days later you’ll be left to find out that the cheque you were sent (which seemed to clear) actually ends up getting reversed & bouncing.

By now though it’s too late – the item is already on its way to the scammer & there’s not a great deal you can do.

But whilst that ones a little easier to see through, the car wrapping scam is much more difficult… Because it seems very legit, and in actual fact, there are actually legitimate ways to make money by wrapping your car…

There used to be a company called Comm-motion which would pay people money each month for putting wraps on their car. Members were able to earn around £200 per month, and whilst that company has since closed I’m sure there are likely still others out there & that’s what makes the car wrapping scam harder to detect. It just seems so legit & genuine.

Protecting Yourself From The Car Wrap Scam

Firstly, if the offer sounds too good to be true – it likely is. As I mentioned above Comm-motion (which has since closed) was a legitimate car wrap advertising company & they paid around £200 per month to people who wrapped their vehicles & covered so many thousand miles per month.

If a company is offering more than £200/month be extremely sceptical as ultimately the act of wrapping your car & driving around is a very simple task. In life, money doesn’t come easy, so question why you’re been offered so much, for so little.

On top of that, if they’re trying to pay you by check – either ask for an alternative means of payment or wait for the check to entirely clear before doing anything.

Usually, a cheque only takes around 6 working days to clear & if the person who sent it is not willing to wait that long or is pressuring you into taking action or making payments before then there’s likely something dodgy going on.

Do not, and I repeat do not send ANY money to anyone unless you have had confirmation from the bank that the bank has 100% cleared into your account to the point that the transaction is now irreversible.

More importantly though – you should never have to pay any money for this sort of thing. If a company wants you so badly to advertise for them that they are willing to pay you to do it, then they should also be willing to pay the costs of the wrap/design themselves too. If they are not, the simple way to prevent being scammed is to tell them to take the cost from the money that they pay you.

If they won’t do that & they still require you to personally forward money on or pay people, again it is much likely a scam.

Regardless though I’ll be honest – wrapping a car (and having it rewrapped every week or month) is a HUGE hassle just for an extra £200 or so per month – and the truth is there are MANY better legitimate ways to make money.

I’d, therefore, suggest giving up on the car wrapping thing altogether & instead checking out these better ways to make good money online (for free).

Hopefully, though you dodged the car wrapping scam, and hopefully my post here was insightful to you on how it all works. If you do still happen to have any further questions though or maybe any comments you’d like to add then don’t hesitate to leave them below. I always love hearing from my readers. 🙂