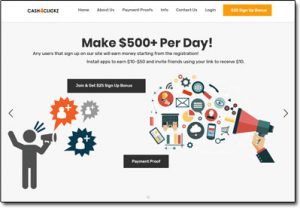 According to the Cash4Clickz website, you can sign up for free & start making money right away, earning $10 to $50 for every friend you invite.

But is it actually legit? Or is Cash4Clickz a scam that you should be avoiding?

Well, I’m really glad that you decided to do your due diligence & came here to this Cash4Clickz review first before signing up to it because I can immediately tell you that the whole thing is NOT what it seems. It’s actually a dangerous site.

As I briefly touched on above Cash4Clickz is the name of a newly launched website which claims to be the “#1 influencer network”… It basically promises to provide people with social media with an easy way to make money from it.

You’re led to believe that all you need to do in order to be able to make hundreds of dollars per day is simply sign up to Cash4Clickz, copy your unique referral link & then share it on the web to invite other people.

For every person, you invite Cash4Clickz claims that they’ll pay you $10 to $50…

But that’s a whopping amount of money – especially since those people are creating free accounts… I mean where is the money coming from? How on earth can Cash4Clickz afford to pay out so much for referrals?

Well in the Cash4Clickz FAQ they claim that they earn money from advertisers, and according to them the more visitors they get to their website the more money they make… Which is how they’re able to pay for referrals.

The people behind it simply keep on changing its name & appearance a little in order to escape the negative reviews about it that expose the truth (like min here) so that they can continue tricking people into signing up.

So as I discussed in the previous section of this review, the concept is that you’ll be able to sign up – grab a link & then invite friends using the link in order to make money… However, that’s NOT really how it works.

In reality, Cash4Clickz is actually what’s known as a data-harvesting scam, which means they’re not really interested in paying anybody – they’re just interested in tricking them so that they can get their details.

You see the people behind Cash4Clickz are working on the premise that most people use the same credentials (email/username/password) for every single website that they sign up to… And they’re basically hoping that you sign up to Cash4Clickz using the same details that you use elsewhere.

Once you do sign up to Cash4Clickz (which I don’t recommend) they’ll then do 1 of 2 things… They’ll either try to find accounts associated with your details & compromise them (social media accounts, PayPal accounts etc) or they’ll sell your details onto third parties.

Compromised accounts come with obvious dangers – but even if they sell your details on its still bad news because not only will you likely end up bombarded with spam but you’ll also potentially be lured into further scams.

Don’t Fall For The Trickery

Yes, the people behind Cash4Clickz have certainly gone to extreme lengths to trick you into signing up & promoting the scam, but it is a scam all the same… Nobody who joins will ever get paid.

You see they have indeed set it up so that your account balance appears to increase as you refer people but this is just a trick to encourage you to refer more & more so that they can steal their data too.

Unfortunately, when it comes to withdrawal time you’ll just be left to discover the hard way that the whole thing has been a scam & a complete waste of time… Your withdrawal request will just get ignored or “voided”… And that’s why they have such a ridiculously high withdrawal limit.

They want you to refer as many people into Cash4Clickz before you manage to discover it’s a scam.

And just to prove it’s all lies, check out the image below: 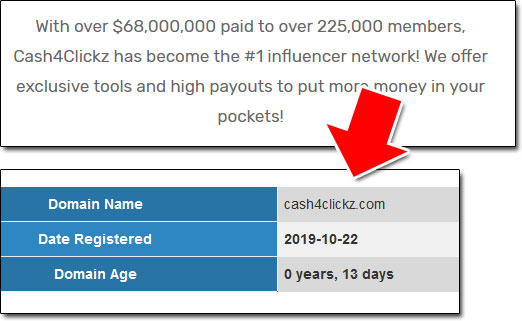 They claim to have over 225,000 members & to have paid out over 68 million dollars however as you can see the website was actually only launched a mere 13 days ago so that’s simply not possible.

Like I said this is a scam that just keeps surfacing then closing down & relaunching under a new name… NiceCash & InfluencersEarn are the previous versions of this scam & you can check out my reviews of those sites to see that they’re all exactly the same thing.

So with that being said, I think it’s time for…

Yes, there’s no doubt about it – Cash4Clickz is a scam & as I mentioned in this review it’s also a very dangerous one because the people behind it have the intention of breaking into your accounts or selling your details on for profit.

Cash4Clickz should, therefore, be avoided at all costs & you certainly shouldn’t be promoting this thing to others because it will just result in those people becoming a victim of the scam too, which could end up being your fault.

Also, it’s worth pointing out that if you have already happened to sign up to Cash4Clickz & you did so using the same details that you use elsewhere then you should definitely go and change those details ASAP.

And if you really want to make money online legitimately I suggest you stick with one of these proven methods instead.

Or you could also be sure to check out the same method that I use to make most of my own money online which is called affiliate marketing. In my opinion, that’s one of the best ways to make money & it’s also great for beginners.

If you’re interested in getting started with affiliate marketing or learning more about it then be sure to check out Commission Academy.

But whatever you decide to do I simply hope that my review of Cash4Clickz here has given you a good insight into how it all really works & I most importantly hope that it has helped you to avoid it.