Have you come across NiceCash? The #1 influencer network that promises to pay you between $10 & $15 for every friend that you invite through your link? 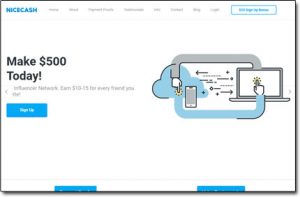 Are you wondering if it’s actually legit or just a scam to avoid?

Well, you’ve come to exactly the right place because that’s exactly what I’m going to be uncovering here in this NiceCash review… And I can tell you right from the off that it is NOT what it seems. It’s actually a pretty darn dangerous site.

As I briefly touched on above, NiceCash calls itself the “#1 influencer network” and it promises to pay its visitors for referring friends. According to them, you’ll be able to share links on social media & earn $10 to $15 for every person that clicks them & creates a free account.

They even claim that you’ll be able to make as much as $500 per day and to attempt to put your mind at ease & convince you that it’s legitimate they even have pages dedicated to showcasing “payment proofs” and testimonials.

But the question is… Is it really legit?

After all the whole thing sounds WAY too good to be true, right? I mean think about it – if you could really earn $500 per day just by sharing links on social media then why isn’t everybody doing it?

Why are still people working at jobs they dislike for less money if they could sign up to NiceCash & earn more by doing less?

Well, the answer is because NiceCash isn’t what it seems. It’s actually just a scam & I can say that so confidently because I’ve actually already seen this same scam several times before under various different names.

The people behind it keep on changing the name of it in an attempt to escape the negative reviews that expose the truth (like this one) so that they can continue tricking more people into signing up to it.

Some of its past names include Tap 2 Earn, CloutShare, Notion Cash & Viral Pay.

However the truth is that nobody actually ever gets paid – the whole thing is just what’s known as a data-harvesting scam.

So the whole opportunity is actually fake & they’ve actually only created it to trick you into signing up & handing over your details so that they can either attempt to break into accounts associated with your details or sell them on to 3rd parties for profit.

They’re basically preying on the fact that most people sign up to multiple websites online using the same email, username and password… So after signing up to NiceCash they’ll attempt to find other accounts associated with your details to break into.

And if they’re unsuccessful at breaking into your accounts they’ll likely just sell them on to 3rd party companies for profit which will result in you being bombarded with spam. What’s worse is that this spam will likely try to lure you into further scams.

On top of that though the creators are clearly quite cunning because they have actually built their scam in a way which tricks you into luring other people into it. You’re told you’ll “earn money” for referring others, but the money isn’t real… They’re just using you to do their dirty work of promoting it.

It’s quite clear they’ve gone to extreme lengths to build their scam too because they’ve actually set it up in a way so that your account appears to accrue profits accordingly, but the problem is it’s just like a video game… They will never actually pay out the “money earned”.

That’s why they have such a ridiculously high withdrawal limit – so that you’ll have to recruit a whole bunch of people before you’re able to discover that it doesn’t really pay & that the whole thing is a con.

The Proof It Doesn’t Really Pay

Remember towards the beginning of this NiceCash review when I mentioned that they had gone to the lengths of creating a “payment proofs” page and a testimonials page to try to convince you that it was legit?

Well, surprise surprise none of the “payment proofs” or testimonials are legit…

The photos have been photoshopped & the videos contain actors hired from the website Fiverr as shown below:

That guy featured in the video back when it was called ViralPay but he also appears again on the NiceCash scam website. On top of that, he was also seen on the Tap 2 Earn website too which was another version of the scam.

Plus NiceCash claims to have paid out over $44m to 300k+ members, which is odd considering as shown below their website was only actually launched last month:

Yes, of course, NiceCash is definitely a scam & none of the members who are involved with it will ever get paid. They’re just being tricked into handing over their details but worse, they’re also being tricked into luring others into the scam.

As I mentioned earlier in this review the NiceCash website is really just a data-harvesting website. They’re simply hoping that you sign up using the same details that you use at other websites so that they can break into your accounts or sell your details for profit.

It, therefore, comes without saying that you should 100% avoid NiceCash & if you truly want to make good money online then I would advise that you simply stick with one of these legitimate methods instead.

One of the best methods, in my opinion, is something called affiliate marketing & that’s actually the same way that I personally make most of my own money online. It basically involves you promoting products or services for commissions & the amount you can earn with it is completely uncapped.

If affiliate marketing is something that you’re interested in learning more about or getting started with then I’d highly recommend you check out Wealthy Affiliate which in my opinion is one of the best places to do exactly that.

Or as I say, alternatively check out one of these other legitimate methods for making money.

But whatever you decide to do I just sincerely hope that my honest review of NiceCash here has given you a good insight into how it really works & more importantly I hope it has helped you to avoid it. If you still happen to have any further questions or comments though then don’t hesitate to leave them below. 🙂