CloutShare is a brand new website which has nicknamed itself the “#1 influencer network” and it promises that it can help you to easily earn as much as $500 per day by simply signing up for free & sharing links on social media. 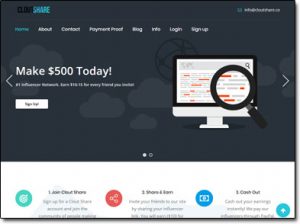 But is it really true? Could you really earn $500 per day by simply sharing links on social media or is CloutShare a scam that should just be avoided? And if it is a scam then how exactly does the scam work?

Essentially CloutShare portrays itself as being a website that provides people (primarily under 25’s) with the opportunity to make lots of easy money by simply sharing links with their friends on social media.

“Clout” refers to social influence, and therefore as the name suggests the whole thing revolves around using your social influence to get others to sign up to CloutShare.

CloutShare claim that you can simply sign up for free, grab a link, share it & then earn $10 for every single friend that you get to create a free account just like you did… Plus on top of that they even claim to pay you $25 just for signing up too.

But why are they giving so much money away? And if everybody is creating accounts for free then how is CloutShare actually earning money? How can they afford to pay out so much to their members?

Sounds a bit fishy, don’t you think? And that’s because it is…

The bad news is that CloutShare isn’t legit – it’s actually just a scam & the reason I can say that so confidently right from the off is because I’ve actually already exposed this same scam several times before when it was launched under different names.

It makes bold promises & looks legit, but none of the members ever get paid. In reality the whole thing is just a trick to lure you into something dangerous (as you’ll soon see) and the creator of it keeps on simply changing the name in an attempt to escape the negative reviews so that he/she can continue tricking people into joining.

Some of its previous names include KashTree, MoneyChasers, CashOG & TheBucks.Club. If you click on any of those links you’ll be taken to my previous reviews of those programs & you’ll see that the websites are pretty much identical to that of CloutShare, because it’s the exact same scam, just re-hashed.

So how does the scam work? What do the owners of it get out of it if it’s free? How do they scam you? Well keep on reading to find out because that’s exactly what I’m going to explain next…

So like I mentioned in the previous section of this review basically the whole CloutShare thing is just a “trick”. There isn’t really any money & nobody really gets paid – instead they’re just tricking you into signing up to get your data.

Therefore the concept is that they trick you into signing up by pretending to offer you a “$25 welcome bonus” and a great opportunity, and they simply hope that you sign up using the same details you use elsewhere.

The people behind it will then likely try to find any accounts associated with your details (such as PayPal accounts, social media accounts etc) & break into them… Or they could just sell your details onto unscrupulous third parties which will result in you being bombarded with spam.

Either way it’s not good news…

But what’s worse is the fact that they’re not just tricking you into handing over your details, they’re also tricking you into to getting others to sign up to their scam too by pretending to pay you money for referrals.

The problem though is that they’ll never actually pay you – the promise is a fake one & that’s why they’ve set their withdrawal limit so ridiculously high (so that you’ll have to refer a lot of people before being able to discover it’s a scam).

You see there are actually some legitimate get-paid-to websites that do indeed pay you money for small tasks & referrals, but generally because the tasks are so easy these websites only pay very little & I don’t really recommend them.

In my opinion there are much better ways to make money online which will see you better rewarded for your time.

One of my favourite ways for making money online is something called affiliate marketing which is actually the same way that I personally make most of my own money online. Affiliate marketing basically consists of you connecting people with products or services & getting paid commissions in return.

So as an example you could sign up as an affiliate of Amazon (which is free to do) and promote products from their website. If somebody clicks your link & then buys something, you get paid! (as shown below):

The great thing about affiliate marketing is that it’s easy to get started with & the amount you can earn is totally uncapped. I personally earn a full-time income doing it & you yourself can get started with it for free over at Wealthy Affiliate.

I mean think about it, if you could really earn $500 per day so easily just by sharing links on social media then everybody would be doing it. Nobody would be left working jobs & the entire world would be in crisis…

Sure you can make good money online but you must put in the relevant work to make it happen. The internet is great but it’s not magical & it’s not going to see you getting rich for doing little to no work at all.

Aside from that though there’s also the fact that CloutShare claims to be the “#1 influencer network” & to have been founded in 2013 (as shown below) but the domain records show it is actually only 1 month & 2 days old:

And then there’s the fact that as I mentioned earlier in this review the whole thing just simply doesn’t add up… There is literally NO revenue coming into CloutShare via their website so there is no way they could afford to pay such large sums to their members… It simply isn’t possible.

Even the legitimate websites that do have revenue coming in (through advertising etc) couldn’t pay anywhere near $10 per referral, that’s a crazy amount of money to be paid out in return for somebody creating a free account… It’s unheard of.

So yeah, with that in mind I think it’s time for…

Yes there’s no doubt about it, CloutShare is definitely a scam & none of the members that join will ever get paid. Instead they’ll just be putting their details at risk & if they use the same details that they use elsewhere then they could find their accounts end up getting compromised.

I mean admittedly CloutShare do indeed make their scam seem convincing by setting member’s account balances to increase accordingly with their activity, however the numbers are just fake & CloutShare will not process any withdrawal requests – they’ll just reject them as “fraudulent clicks”.

You can see that’s the case by checking out the comments on previous versions of the scam such as KashTree, MoneyChasers, CashOG & TheBucks.Club. Everybody reported that they just wasted their time & got nothing in return, so don’t fall for it.

Like I mentioned earlier in this review though there are still legitimate ways that you can make money so even though that CloutShare itself is a scam it doesn’t mean that you can’t make money online whatsoever before you absolutely can.

I myself make a full-time income online & I make most of that through something called affiliate marketing which is one of my favourite & most highly recommended ways for making money online.

Therefore if you’re still interested in earning online then I definitely recommend you check that out & you can get started with it (or learn more about it) for free over at Commission Academy. Alternatively you can also check out these other great ways to make money too.

But whatever you decide to do I just sincerely hope that my review of CloutShare here has given you a good insight into how it really works & the hidden dangers that are associated with it. If you still have any comments or questions you’d like to add then of course don’t hesitate to leave them below. 🙂