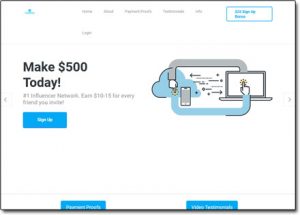 You’re told that you’ll get a whopping $25 bonus just for signing up & that you’ll earn between $10 to $15 for every friend you invite which will allegedly give you the potential to see yourself earning $500+ per day.

But is it really legit? And if it is then where is the money coming from if it’s free to join? Or is CashOG a scam that you should just avoid?

Well I’m glad that you decided to do your due diligence and came here to this review first before joining CashOG because what I can tell you is that it is NOT what it seems & it is actually very a dangerous site (as you’ll soon see).

CashOG is short for “Cash Original Gangster” & it is a website that promises to provide you with an easy way to allegedly make over $500+ per day by just sharing links on social media & referring friends.

But why would CashOG want to pay you for referring friends? And how can people get paid if everybody is signing up for free? Where is the money coming from?

But what I can tell you right from the off is that that’s total BS.

Not only are there NO adverts on the CashOG website, but I can also tell you as an online marketing expert that there is NO way any company could earn so much through advertising alone to be able to pay $10 to $15 for every new account created.

So the whole thing smells a bit fishy…

And that’s because it is fishy!

The CashOG website is actually a scam website (a very dangerous one as you’ll soon see) and I can say that with 100% confidence because I’ve actually already exposed this scam several times before.

The creator simply keeps changing the name of it in an attempt to escape the negative reviews so that he (or she) can continue tricking more people into signing up.

Some of its previous names include PayCate, WeeklyHourJob, SwagPay & InfluEarn. The names may be different but the scam itself remains exactly the same.

So the concept is that you simply create a free account with CashOG & then you get a unique referral link which you can share to invite friends. CashOG claim they’ll pay you $10 to $15 for every friend you invite.

The problem though is that nobody ever gets paid – and that’s because there’s no money coming in.

You see yes, CashOG may certainly make it “appear” like you’re making money (because your account balance increases accordingly as you refer friends), however they’ll never let you make a withdrawal.

And that’s why they’ve set their withdrawal limit so ridiculously high, so that you’ll have to refer a whole bunch of people before you’re able to discover the hard way that the whole thing’s actually a scam.

In reality the promise of money for referring friends is a fake one, and the reason they’re promising money is because they’re essentially using you to do the dirty work for them & promote their dangerous scam.

But I hear ya – what exactly is the scam?

After all it’s free to join right? So how could it possibly be a scam?

Well here’s the deal, the people behind CashOG are basically preying on the fact that most people sign up to multiple websites using the exact same username, passwords & email addresses.

So what they’re trying to do is collect as much data as possible from people & then they’ll attempt to break into accounts that are associated with the details which could include Facebook, PayPal & bank accounts.

Therefore if you’ve already signed up to CashOG & you did indeed do so using the same credentials that you happen to use elsewhere then you should go & change those credentials ASAP.

And if you’ve already referred others into CashOG then I highly recommend you share this CashOG review with them to let them know the truth so that they too can protect their accounts before they become compromised.

Oh, and just in case you’re still thinking about “trying it out anyway” just to see if maybe it does work then let me point out some of the red-flags to prove to you that it is 100% undoubtedly a scam…

Well the first red-flag is with the name itself – after all what legitimate website is going to call itself “Cash Original Gangster”. Gangster is a word used to describe a member of a gang of violent criminals… So it’s hardly the most professional name, LOL.

There’s the fact that the CashOG website claims to have been founded in 2015, yet WHOIS records show that the domain name (cashog.co) where the website is hosted was only registered less than 2 months ago as shown below:

Then there’s the fact that their “support email” isn’t even a working email address:

And finally there’s the fact that not only are their testimonials fake (as the photos have just been taken from stock image sites), but they’re also associated with other scams such as CloutPay as shown below:

CashOG is 100% a scam and I think that’s quite clear from the evidence that I just put together above. The whole thing is nothing but a waste of time, nobody will get paid & instead it could just lead to your accounts getting compromised.

All the people behind CashOG are doing is trying to gather as much data as possible from people (mainly user credentials) so that they can attempt to break into their accounts. What’s worse though is that they’re then tricking people into doing the dirty work of promoting their scam for them by giving them false promises of earning money.

So do not sign up to CashOG, and certainly do not refer anybody to it.

Instead if you really want to make good money online I suggest you just stick with one of the legitimate & proven methods from my top picks page here.

The other good thing about it is that you can get started for free with it over at Commission Academy.

But whatever you decide to do I just sincerely hope that my CashOG review here has given you a good insight into how it really works & hopefully it has enabled you to avoid getting caught out by it. If you do have any comments or questions then don’t hesitate to leave them below.