PayCate.com, the “earning website for students and house wife” as it calls itself claims that it can enable you to easily make lots of money online by simply sharing links & referring friends… 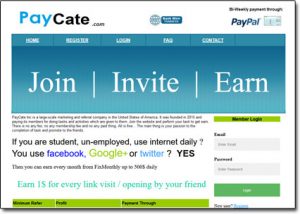 You’re literally led to believe that it’s as simple as join, invite & earn, and that you can begin making hundreds of dollars per day right from the comfort of your very own home even if you have absolutely no experience of working online…

But it sounds a bit too good to be true, doesn’t it? So what actually is the truth – is PayCate.com legit or is just another scam that’ll see you wasting your time & getting nothing back in return?

Well the good news is that you’ve landed in the right place to find out because in this PayCate review I am going to be uncovering how the whole thing is NOT what it seems.

PayCate.com basically portrays itself as being a website that provides an easy way for people to make money, though it’s quite easy to see that the website has been put together in very poor English & as a result many people are very sceptical about it.

Is it really legit? And can you really earn so much money just by referring friends to a free site like PayCate?

They claim that you’ll earn $1 per click on your links & up to $150 per friend that you refer (if you refer over 100 per day) but that’s an awful lot of money, especially since the website is actually free to join…

Where is the money coming from & how can they afford to pay out hundreds of dollars per day to their members?

Well as you likely suspect the truth is that there is no money – instead the whole PayCate website is just a con & the promise of getting paid money for referring friends is a false one.

Nobody will ever get paid through the site.

I can tell you right from the off that the PayCate.com website is actually nothing but a flat-out scam & it’s a very dangerous one at that (as you’ll soon see below).

The reason I can say that with so much confidence is because I actually just recently exposed this exact same thing back when it was named WeeklyHourJob. It’s just changed its name in an attempt to escape the negative reviews & scam more people.

So what’s the scam all about & how does it work? And how can they get money from you if it’s free to join? Keep reading to find out…

So the “concept” is that you simply sign up, grab a referral link & then get friends or family to sign up in an attempt to earn commissions… However the reality is that the whole thing works in a much different way.

So you sign up, fill in your details – they get your data… Then you refer others (thinking that you’re getting paid) and they get their data too… Yet sadly nobody ever ends up actually getting paid.

But what are they doing with the data?

Well this is where the problem lies because basically the scammers behind PayCate are preying on the fact that most people sign up to several websites using the same username, email & password for each one…

So basically they’re hoping that the people signing up to their website do exactly that, and then they’ll attempt to find any other accounts associated with the details (such as Facebook, PayPal accounts etc) and break into them.

As you can likely now see it’s a very cunning scam indeed & you can also likely see why you shouldn’t join OR refer anybody to the site.

Plus if you have indeed already signed up & you did so using the same details you use elsewhere then I’d highly recommend you go change them as soon as possible (and share this post with others so that they know to protect themselves as well).

So jumping back to the beginning of this review, remember when I said I’d previously exposed the scam when it was named WeeklyHourJob? That’s why it keeps changing its name so much, to escape the negative reviews like this one so that the people behind it can continue tricking people into joining.

So far I’ve seen it called all different sorts of things such as;

Basically anything that sounds too good to be true probably is, and you should ALWAYS do your due diligence before joining, even if it’s free (so be sure to bookmark my site & search it for reviews anytime you need).

A Closer Look At The Red-Flags

So always be sure to search my reviews before thinking about joining any opportunity (even if it’s free to join).

But aside from that there are still a huge number of other red-flags too – for example the fact that the website has been built in very poor English.

I mean this generally isn’t an issue, there are many websites built in other countries where the English isn’t too good, however given that PayCate claim to have paid out millions it is pretty unprofessional (and unlikely) to have a site built in broken English.

They could quite easily hire an English writer if it were legit & if they were making so much money, so the fact that the English is broken is a telltale sign that it’s NOT legit.

Then there’s the question about where the money is actually coming from. There is no mention of it anywhere on their website & frankly there is no way ANY company could (or would) pay out so much money for getting new members to join for free.

I mean sure, if the membership cost £100 then it would be quite easy to see how they could afford to pay £20 for referrals… But it doesn’t, there is NO cost (and no advertisements) on the PayCate website meaning there is absolutely no money coming in… Which means no money to pay out.

P.S. the mention about membership costing £100 there was just a fictitious example – you must also be careful about sites that charge for membership & pay for referrals because they could potentially be illegal pyramid schemes too.

And then there’s the fact that despite claiming to have paid out hundreds of thousands of dollars & been around since 2015, their website is actually just a mere 6 days old at the time of writing this review as shown below:

Yes, PayCate.com is definitely a scam website & it’s no good for anybody except the people behind it who are looking to part people with their data so that they can then attempt to break into their accounts (such as Facebook & PayPal accounts etc).

There are indeed some legitimate websites where you can earn small money by completing tasks but generally I don’t recommend them either because they take up a lot of time & only pay very little in return.

In my opinion the best way to earn money online is something called affiliate marketing which is where you basically connect people with the products that they’re looking for & get paid commissions in return.

The reason I think it’s one of the best methods is because it’s very straight forward, anybody can do it, there’s no limit on the amount you can earn & you can get started for free with it over at Wealthy Affiliate.

But if affiliate marketing isn’t your thing for whatever reason then there are also some good other alternatives too which could provide you with a relatively decent income as well and you can check those out here if you’d like.

But whatever you decide to do I just hope that my review of PayCate.com here has given you a good insight into how it really works & hopefully you can now see why it’s not a good site to join. 🙂 Feel free to leave any comments below.