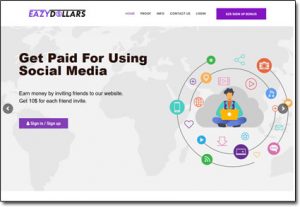 Can you really earn $10 for every friend you invite to Eazy Dollars through your link? And do they actually pay out the money that you earn?

Or is the whole thing just a big scam that you should avoid?

What Is Eazy Dollars?

Eazy Dollars is a website that (as the name suggests) claims that it can help you to earn easy money online. You’re led to believe that all you need to do is sign up, share a link & that you can begin earning as much as $10 for everybody you refer…

But can you really make money so easily? And if you can, then why isn’t everybody doing this?

Why are people still working at jobs they dislike if you can just “share a link” online & earn hundreds of dollars per day?

Well the reason is because Eazy Dollars is NOT what it seems – and whilst the website claims that you can earn money with ease, I can tell you with confidence that none of the members will actually ever get paid.

Easy – because Eazy Dollars is actually just a re-hashed version of a scam that I’ve already seen several times before. Previously the same scam has been called CloutPay, WorkingMob & Cash For Kids Club… Now here it is again under the name of Eazy Dollars.

Well the truth is that Eazy Dollars is actually a very dangerous & cunning scam, and if you keep on reading below then I’ll show you why as I explain in more detail how it all actually works…

How Does Eazy Dollars Work?

So the Eazy Dollars website leads you to believe that you can simply sign up, share your link & make money. They claim that you’ll earn a whopping $10 for everybody that sign up via your link, and that you’ll even earn an additional $1 for anybody that just clicks on it…

But the truth is that those claims are fake.

It’s only when people come to actually submit a withdrawal request that they’re left to find out it’s a scam, and that’s why the withdrawal limit is so high.

When you submit your withdrawal request the creators of Eazy Dollars will just claim that you have committed “click fraud” and that as a result your earnings will be voided… But that’s just another lie.

So what’s really going on here? What are Eazy Dollars getting out of this? Why are they tricking people?

Well the reason they’re tricking people is because what they’re actually doing is running a dangerous data-harvesting scam, so they’re trying to get as many users to sign up as possible so that they can get as much data as possible.

And to get people to sign up, they’re pretending to pay them money.

Then once they’ve got people signing up their plan is to attempt to either sell their data on to others (for marketing purposes) or to attempt to break into any accounts that might be associated with the details.

They’re basically hoping that people sign up to the Eazy Dollars website with the same details that they use to sign up to other websites (such as PayPal or online banking – or social media).

It’s true that most people use the same username/passwords for every website they visit, and the creators of Eazy Dollars are preying on this to try to break into peoples accounts.

A Closer Look Into The Lies

As an experienced online marketer who actually makes a living online I can tell you that there is barely so much as a single sentence on the Eazy Dollars website that holds true. Nearly every single word is a lie.

Do you really think a new website has paid out 55 million dollars in just 2 months? No way!

They are $52.5 million short in their calculation LOL.

And it’s not just a typo because these statistics are repeated multiple times throughout their site, again as shown below:

And then there’s the so-called “payment proofs” in which the creators of Eazy Dollars show alleged direct messages & retweets from members who’ve supposedly been paid… However these are far from “proof” because all the usernames have been purposely blurred out to stop you from verifying them.

How can it be proof if it cannot be verified? They are just fake photoshopped images.

So who is actually behind it all? Who has put it together? Let’s take a look at that too…

Who Is Behind Eazy Dollars?

Well here’s where another red-flag comes into sight because there is absolutely NO information whatsoever to be found with regards to who is actually behind the Eazy Dollars website.

Why have the creators chose to keep themselves hidden?

Legitimate websites don’t do such a thing – the owners make themselves known & they provide links so that you can actually get support. Eazy Dollars on the other hand don’t do any of that… And that screams scam!

Update, they have now added a “contact page” to their website and on it their address is listed as Eisdenstraat 142, 1066 CX Amsterdam, Netherlands… But I ran a Google search of that address & here’s a photo of their so-called “headquarters”: 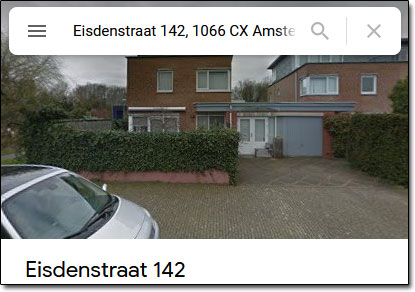 Does that look like the headquarters of a company that has allegedly paid out $55 million in just 2 months? I don’t think so, LOL.

Is Eazy Dollars a Scam?

Yes, there’s absolutely no doubt about – Eazy Dollars is definitely a scam & it’s a very dangerous one at that. The site is NOT paying any of its members & it’s purely set out to part you with your details.

So with that being said if you happened to sign up to Eazy Dollars with the same username/email/password combination that you happen to use anywhere else then I’d highly recommend you change it ASAP.

Also it comes without saying that if you haven’t done so already you certainly shouldn’t join Eazy Dollars – and you definitely shouldn’t share your link because if you do you’re just luring people into a dangerous scam.

Instead if you actually want to learn how to make real money online then I highly recommend you check out Commission Academy as it’s there that you’ll get the training & tools you need to do exactly that.

Commission Academy is my top recommendation for anyone looking to make real money online.

Or alternatively you can check out these other cool methods too – in my opinion they’re not as good as my number 1 recommendation, but they’re still worth checking out all the same so that you can find what’s best for you. 🙂